Coraki is located 720 km north of Sydney via the Pacific Highway and the Coraki-Woodburn Road.

No one is quite sure what the Aboriginal word was - it was either "hooraki", "cooriki" or "kurrachee" and it is widely accepted as meaning either "meeting of the waters" or a word to indicate the junction of the two rivers.

Mid-Richmond Historical Society Museum
Located at 16 Adams Street in the old Woodburn Shire Council Chambers (1912) the museum contains an extensive collection of local artefacts, memorabilia, family histories and photographs from the earliest white settlement. There is a comprehensive maritime history section along with and outdoor shed containing farming and ship building equipment. The War Memorial room contains the Honour Boards from many of the village halls around the district including a World War I Bungawalbyn board, hand carved with a pocketknife by the mother of one of the soldiers. It is open Wednesday 10.00 am - 3.00 pm, and Saturday 10.00 am - 3.00 pm.  Check https://www.facebook.com/corakimuseum for additional information. Tel: (02) 6683 2838.

The Glebe Bridge
Located on Coraki Road, on the way from Coraki to Lismore, the Glebe Bridge is one of only three bascule bridges (a bascule span bridge is a moveable bridge with a counterweight that continuously balances a span, or "leaf," throughout its upward swing to provide clearance for boat traffic) in New South Wales. The others are at Narooma (it works five times a year) and Carrathool. The bridge was designed by Henry Harvey Dare for the NSW Public Works Department. It crosses the Richmond River at a pleasant rural location and is considered particularly aesthetic.

Historic Buildings in the Town
Most of the town's historic buildings are located on Richmond Terrace. The Richmond River and Riverside Park are on one side of the street and the other side are the Police Station which is located in the former Court House (1888) and was designed by the notable architect James Barnet; the former E.S. & A. Bank which dates from 1911; the historic Club Hotel and the Coraki Hotel.

Coraki Cemetery
Here is a wonderful footnote to the racism of early Australia. The cemetery is historic and particularly interesting in the way it records the early Irish settlement of the area. But the truly remarkable feature is the memorial to Alex James and Sam Anderson, two local cricketers and sportsmen whom the town felt deserved a monument to their sporting prowess. The only omission is that nowhere on the monument does it mention that they were both of Aboriginal descent. In his book Over But Not Out, the late Richie Benaud observed: "My father was sure Sam Anderson was good enough to play Sheffield Shield cricket, and possibly for Australia, but one of the main problems he faced was homesickness ... Anderson went to Sydney at one stage to play cricket but soon returned to the north of New South Wales because of loneliness and a thorough dislike of the city life compared to the countryside. My father said, 'Given a chance, he could have been a champion.'"

* Prior to the arrival of Europeans the Richmond River valley had been occupied by people from the Bundjalung Aboriginal language group.

* The first Europeans arrived in the 1830s and settled around Coraki where there were good stands of red cedar.

* The first permanent settler was William Yabsley who, in 1849, obtained a lease to Brook Station. This evolved into the thriving port of Coraki.

* William Yabsley established a shipyard which for many years built ships which plied both the Wilson and Richmond Rivers. He opened a general store and conducted a school for both his family and the apprentices who worked in his shipyard.

* By the 1860s Coraki was the major port on the Richmond River. Through the port came the cedar and pine which was being cut up river.

* New settlers arrived in the district in considerable numbers in the early 1860s.

* By 1869 the town had a general store, a hotel and a small cedar school building all located on Richmond Terrace.

* In 1863 W.T. Yeager purchased the first steam tug to work on the Richmond River and established a saw mill, wharves and a shipyard across the river from Coraki.

* In 1866 the Reverend John Thom brought the first sugar cane cuttings to the area.

* The town continued to prosper throughout the 1870s with large numbers of ships making the trip from the heads at Ballina up the river to collect the supplies from the wharves. The prosperity of the town was largely due to the entrepreneurial skills of both William Yabsley and W. T. Yeager who had become the most successful ship owners on the Richmond River.

* By 1870 the Coraki Post Office was open for business.

* In 1878 the Commercial Bank opened a branch in the town.

* By 1886 the North Coast Steam Navigation Company had established its head office at Coraki.

* In 1886 the local newspaper, the Richmond River Herald, was first published in Coraki.

* The first municipal council was formed in 1891.

* The Coraki Hotel opened for business in 1892.

* The Coraki butter factory was opened in 1898. The Club Hotel opened that same year.

* In 1900 a telephone exchange was installed in the Post Office.

* John Campbell provided funds and the Campbell Hospital was completed in 1903.

* In 1976 the town became part of the Richmond River Shire.

* Today Coraki's appeal lies in the way it offers an insight into one of the great 19th century river ports. 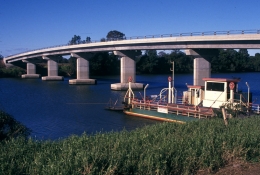 The modern bridge beside the historic punt on the Richmond River. 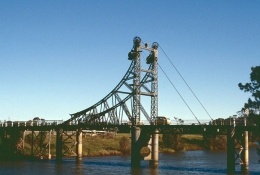 The historic Glebe Bridge, a bascule bridge, across the Richmond River outside Coraki. 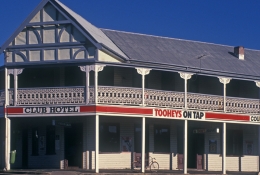 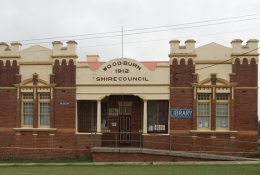 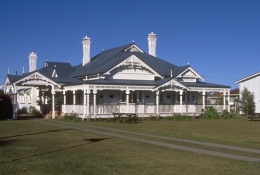 Yabsley House - the town's most elegant dwelling was demolished around 2004. 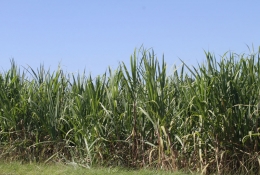 Sugar cane growing beside to road on the way out to Coraki from Broadwater.