Coral Bay is a small holiday resort town which is really nothing more than a couple of caravan parks, holiday homes for fishermen, a hotel, two cafes and a few basic facilities. The town's great appeal lies in its unpretentiousness, its simplicity and, most of all, its access to the 260 km Ningaloo Reef which lies close to the shore and forms a kind of natural lagoon which is ideal for people wishing to snorkel, scuba dive, canoe or explore the reef. Lying just north of the Tropic of Capricorn (i.e. it is on the same latitude as Rockhampton) the waters in Coral Bay are warm for most of the year and the beaches are white, hard and beautifully clean. Today the town is still quiet and peaceful. A retreat for grey nomads, backpackers, sunlovers and anglers. It is hard to imagine that it will still be like this in a decade's time.

The first settlement in the area was officially named Maud's Landing in 1915. It was named after the schooner Maud which landed in the Bay in 1884. By the 20th century a small bay, known as Bills Bay after Ruby May French who was known locally as Aunty Billy, was attracting holidaymakers. In 1968 a hotel, caravan park and service station were established at Bills Bay. The hotel was known as the Coral Bay Hotel. It was only a short step for the location to change from Bills Bay to Coral Bay.

Ningaloo Marine Park
I have no problems saying that I think this Marine Park, with all its diversity, is actually better than the Great Barrier Reef. It is not as big (obviously) but it can claim to be "the only large reef in the world found so close to a continental land mass, making it an easy snorkel from shore" and that is a real bonus. You can literally dive in off the beach and be on the reef in seconds where, apart from the occasional coral atolls, the Great Barrier Reef requires a journey of at least one hour to access it. You are really in a reef wonderland. The Marine Park stretches south along 260 km of coastline from Bundegi Beach, near Exmouth, to Coral Bay. At points the reef is no more than 100 metres from the shore and its waters are home to such spectacular creatures as the huge whale shark (there are tours out to see them from April to July - they can grow up to 12 metres long), the humpback whale, green turtles, dolphins and dugongs. The Park was declared in 1987 in an attempt to protect Western Australia's largest coral reef and to control public access to it. It is a unique area because the reef is so close to the dry landmass and because it is here that the Australian continent is closest to the continental shelf. The reef boasts 170 hard corals, 11 soft corals and 475 species of fish. In its own way it is as good as the Great Barrier Reef and it is much more accessible. There is more useful information at http://parks.dpaw.wa.gov.au/park/ningaloo.

Point Cloates and Yardie Creek Track
It is believed that Point Cloates was named by Flemish sailors who visited the Western Australian coast in 1719. The Flemish mariner Captain Nash (he may have been an Englishman captaining a Flemish ship), sailing from Ostend in Belgium on a ship named House of Austria, sighted what he took to be an island. In his journal he wrote: "This island cannot be seen far even in clear weather and NE by E and SW by S about thirty-two leagues in length with terrible breakers from each end running about three miles into the sea." He named the island after Baron Cloates, a Flemish aristocrat who was part owner of his ship. It was subsequently renamed Point Cloates, is now part of Ningaloo Station, and was established as a Norwegian whaling station in 1912. By the mid-1920s over 1000 whales per annum were being killed and processed. It was destroyed by a cyclone in 1946. Opened again in 1949 it was closed again in 1963 when a worldwide environmental push prosecuted widespread concern about the ever-decreasing population of humpback whales. Point Cloates can be reached by 4WD vehicles travelling along the coast road (the Yardie Creek Track) which runs from Coral Bay to Cape Range National Park. The wrecks of the Zvir, Fin, Perth  and Rapid all lie on the reef just off Point Cloates.

Turtle Nesting
There are large numbers of sea turtles which feed in the shallow waters of the Ningaloo Marine Park and nest along the beaches around Coral Bay. There are three main species which are common in the area: the Green Turtle which weighs up to 130 kg, can be 118 cm long and can lay 50-100 eggs in a nesting season; the Loggerhead Turtle which is 95 cm long, can weigh up to 100 kg and can lay up to 125 eggs in a single setting; and the Hawksbill Turtles, the smallest at 83 cm long and 51 kg. They lay up to 150 eggs. The best times to view the turtles are "between October and January, usually under the cover of darkness, female turtles visit the beach to lay their eggs. At night, from January to April, you may see new hatchlings making their dash for the sea." Local turtle observation tours occur between November and March.

Water Activities
The signs around the bay explain the range of watery activities available: Kayak Adventure, snorkel hire, wetsuits, canoe hire, glass bottom canoes (yes, the reef really is that close), glass bottom boogie boards. This is the essence of Coral Bay. The reef is so accessible and the facilities are designed so that the visitor either lies on the beach, goes swimming in the warm waters or engages in adventure activities of a watery nature.

* Prior to the arrival of Europeans the area around Exmouth was home to the Thalanyji Aboriginal people.

* The first Europeans to sight the area were Haevik Claeszoon von Hillegom and Pieter Dirkszoon who sailed along the coast in the Zeewolf on 24 June 1618.

* The famous Dutch sailors - Dirk Hartog, Willem Vlamingh, Abel Tasman and Francisco Pelsaert (captain of the Batavia) all passed along the coast.

* Pelsaert, whose ship the Batavia was wrecked on the Houtman Abrolhos on 4 June 1629, rowed from the present site of Geraldton to Batavia and stopped near Point Cloates to take on water.

* In 1801 the French explorer, Nicholas Baudin, sailed up the coast and named Cape Murat after Napoleon's brother-in-law.

* Phillip Parker King was forced into Exmouth Gulf on 11 February 1818 and explored the region for the next eight days.

* Between 1818 and 1899 the peninsula was regularly visited by the pearlers.

* It wasn't until 1884 that the schooner Maud landed in Coral Bay. This is the first known arrival of Europeans in the district.

* In 1896 a town site was formally gazetted. There was a jetty and government shed at the location at the time.

* From 1898-1947 the jetty was the local residents vital link. It received supplies and it was where the wool and sheep produced on the peninsula was shipped from.

* In 1899 the first settler, Thomas Carter, took up land on the peninsula.

* In 1915 the town was officially named Maud's Landing.

* The Cardabia Station was established. It occupied all the land inland from Maud's Landing and Bills Bay.

* By the 1930s a settlement of fishermen's shacks known as Bills Bay (it was named after Ruby May French who was known locally as Aunty Billy) began to appear on the present site of Coral Bay.

* In 1933 Jack McKenna, the manager of the Mia Mia station, built the first shack at Bills Bay.

* By 1968 a hotel, caravan park and service station had been built at Bills Bay. The hotel was known as the Coral Bay Hotel.

* Sometime after 1968 the town named changed from Bills Bay to Coral Bay.

There is no Visitor Information Centre but Ningaloo Reef Resort, 1 Robinson Street, tel: (08) 9942 5934 can answer all your queries and for tours and cruises it is possible to go down to the foreshore and book directly.

There is an exceptionally good and useful local website with information about tours and accommodation. Check out http://www.coralbay.org. 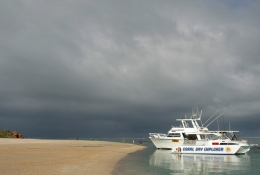 Cruise boats waiting on the shore with the line of the reef on the horizon. 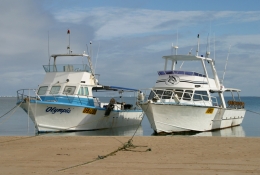 Fishing charter boats waiting at the edge of the bay. 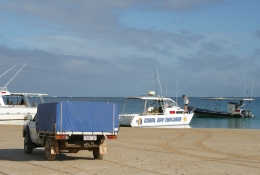 Cruise vessels at the edge of the sand with the reef on the horizon. 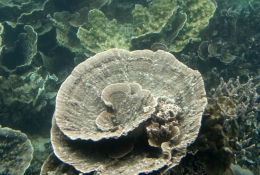 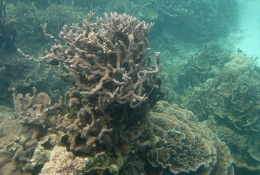 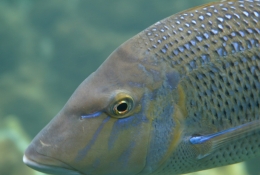 Gropers, huge fish, are common at Coral Bay. There is even a friendly one named Merv. 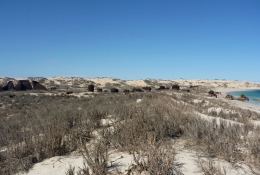 Ruins of the old Norwegian whaling station at Point Cloates.