Corinella is a quiet and sleepy fishing and holiday resort situated opposite French Island on the eastern edge of Westernport. Today its primary appeal is as holiday destination where holidaymakers come to fish and explore Phillip Island. It is surrounded by rural farming land where thoroughbred horses are bred, beef and dairy cattle are grazed, and there are vineyards and flower growers.

Corinella is located 122 km south-east of Melbourne on the eastern shore of Western Port Bay.

There is some debate about the meaning of Corinella. It is suggested that the earliest settlers heard the local Boonwurrung refer to the area as 'Coreen' or 'Koorinella' possibly meaning either 'running water' or 'the place where the kangaroo drinks'. Another version is simply 'the home of the kangaroo'.

Corinella History Trail
There is a useful, and short, history trail (with a map) which can be downloaded at http://www.visitcorinella.com/corinella-history-trail.html. It takes a walk around the township and has twelve storyboards located at points of interest. The storyboards of particular interest include:

2. Harold Hughes Memorial - located on the corner of Smythe Street and Balcombe Street is a small memorial to Harold Hughes, a prominent local citizen who gave to the children of Corinella.

3. Jetty Precinct - located off The Esplanade, the first jetty in the settlement was completed in 1884. It was used for sending and receiving goods from Melbourne. It was here that goods were unloaded for French Island when it became a penal colony. The French Island ferry still runs from the jetty.

4. Strzelecki Monument - located further east along the foreshore is a monument to the party of Paul Edmund Strzelecki and his party (James Macarthur, James Riley) who reached Corinella in 1840. They were starving and exhausted and a local Aborigine, Charlie Tara, guided them through the bush and fed them on koala and native foods. A party of convicts living in the ruins of the 1826

6. Aborigines - the storyboard, located on the path around the headland, records the decimation of the local Boonwurrung Aborigines. In 1837 it was estimated there were 6,000 living in the district. This had dropped to 300 by 1891 and by the early years of the twentieth century they had been wiped out. There are a number of middens on the headland reminding visitors that once a thriving population lived on the shores of Western Port.

8. Fishing - at the end of the jetty there is a storyboard which tells of the oyster farming which operated from the jetty until 2007 when the Victorian government bought the licenses back.

Walking Tracks
There are a number of delightful walks beside Western Port. The walking tracks at Settlement Point provide impressive views across to French Island. There is a walk along the beach from O'Connor Road to Norsemans Road and on to Coronet Bay. Another walk starts at the end of Jamieson Street and continues on to The Esplanade and there is a 45 minute walk which starts from the end of Smythe Street and leads around the Point.

* Western Port was explored by George Bass and Matthew Flinders as early as 1798.

* The explorers Hamilton Hume and William Hovell believed that their 1824 overland journey from New South Wales had reached Western Port. This was wrong. They had reached Corio Bay near Geelong.

* Governor Darling decided to forestall any prospective French plans by establishing a military and agricultural settlement at Western Port. Captain Samuel Wright was dispatched with troops, 21 convicts and William Hovell. Wright established a small military settlement at the present-day site of Rhyll on the north coast of Phillip Island and called it Fort Dumaresq. However, fresh water proved a problem and the outpost was moved to Corinella which was called Settlement Point.

* Hovell's exploration revealed that Western Port was unsuitable for agriculture, owing to poor soil, lack of fresh water and no Frenchmen, led to the abandonment of the  settlements in 1828.

* The settlement of Corinella was proclaimed in 1851.

* In 1907 one-metre thick deposits of guano on Pelican Island, off Corinella, were bagged and shipped to Melbourne.

* A prison was established on French Island in 1915 and Corinella served as a supply port.

which closed in 1975. It subsequently developed as a fishing port.

* Today the town has a jetty, a slipway, a good boat ramp,  a general store, a newsagency and a barge to French Island.

There is no dedicated Visitor Centre for Corinella. Check out the website for all information about the town and the area.

There is a delightful and useful official local website. Check out http://www.visitcorinella.com. 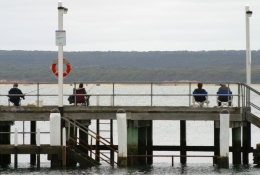 Fishing off the jetty at Corinella 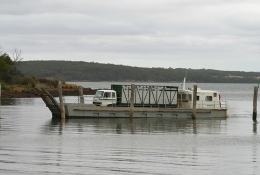 The barge from French Island arrives at Corinella 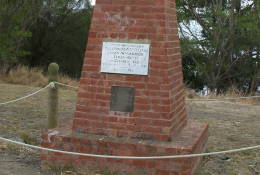