Corowa is a substantial and historically significant river town which is primarily a service centre for the rich agricultural lands on either side of the Murray River. The prosperous district is a mixed farming area with the cultivation of wool, cereals, and grapes being complemented by an abattoir, sawmills and cellar doors. It is also an important tourist region with activities on the Murray and at Lake Mulawa as well as excellent wineries tempting the tippler.

Corowa is 299 km north-east of Melbourne via the Hume Freeway and Federation Highway; 612 km south-west of Sydney via the Hume and Riverina Highways; and 125 m above sea level.

It is claimed that 'Corowa' is derived from a Bangerang Aboriginal word  'currawa' meaning either 'rocky place' or referring to the curra pine which was common in the area and was used for its gum which was ideal for securing a stone head to a spear.

Historic Walking Tour of Corowa
The Visitor Information Centre has a Corowa Self Guided Historical Walk which lists no fewer than 49 places of historic interest around the town - 17 of which are on the main street, Sanger Street - many of which are listed by the National Trust.

Federation Museum
The Federation Museum (1915) in Queen Street (No. 35 on the Walking Tour) has documents recording the struggle for Federation, early lifestyle displays, Aboriginal artifacts and displays relating to local history (02 6033 4041). It is open weekends from 1.00 pm - 4.00 pm. It was originally built as a home for the Border Brass Band.

The Canoe Tree
Drive beyond the Visitor Information Centre down to the banks of the Murray and you will reach one of the finest examples of an Aboriginal Canoe Tree to be seen anywhere along the Murray. You will also get an excellent view of the John Foord Bridge. There is an information board at the Canoe Tree which explains: "In the days before European settlement and for a short time after, Aboriginal people were known to remove bark from trees for various purposes including the construction of shelters, watercraft and containers. This very old River Red Gum bears a scar where bark was removed to make a canoe." It then explains exactly how the bark was removed and prepared and adds: "Most bark canoes took several days to make and lasted about a year. Their low, flat shape suited navigation on the Murray, but they capsized easily and required skilled handling."

The Murray River
The local visitor centre encourages camping, picnicking, waterskiing, swimming, birdwatching, bush walking, cycling, fishing and canoeing on the mighty Murray. There are three boat-launching ramps on the northern bank of the river.

Lake Mulwala
Westward and downstream along the Murray River is Lake Mulwala which is notable for its birdlife. It is also a popular fishing destination and is an interesting measure of the health of the river. In drought times it looks decidedly unhealthy and when the river is flowing it is impressive.

* Prior to the arrival of Europeans the area around Corowa was the southernmost point in the vast Wiradjuri lands.

* In 1851 the colony of Victoria imposed customs duties on all goods crossing the Murray from Wahgunyah to New South Wales.

* In 1852 gold was discovered in Beechworth and by 1854 the first paddle steamer reached Corowa. Foord seized the opportunity, purchased a punt, bought a steamship, built a flour mill, and purchased 640 acres where he surveyed and established the private township of Wahgunyah to serve as the supply base between the river trade and the goldfields. He was also involved in the building of bond stores and hotels in the fledgling township. With true entrepreneurial spirit Foord encouraged new settlers to grow wheat which he ground at his mill. The punt became an important crossing point for stock and passengers and, in a smart twist, Foord named many of the streets after members of his family.

* Grape growing began in the district in 1851 and by 1872 the famous Dr Lindeman owned a local vineyard. By 1877 he had established the Corowa Winery.

* In 1876 gold was found in the district and there was a very brief goldrush.

* The railway arrived from Culcairn in 1892.

* In 1889 the artist, Tom Roberts, visited Brockelsby Station woolshed where he saw shearers and painted his famous 'Shearing the Rams' which now hangs in the National Gallery of Victoria.

* Corowa has a legitimate claim to be described as "the Birthplace of Federation" because it was the centre of arguments about customs being charged when people and goods crossed from New South Wales to Victoria and vice versa.

* An organisation, The Border Federation League, was formed and a conference was held at the Oddfellows Hall in 1893. Locals were infuriated by the customs and the red tape. They demanded 'Federation Now!'.

* On 31 July, 1893, when a meeting of parliamentary delegates was held at Corowa, the Premier of Victoria argued that "When a man who comes here from Victoria is regarded as a foreigner and a woman who goes to Wahgunyah is treated as a smuggler, liable to be stuck up by a policeman and customs officer, it is time some change was made." He was responding to the situation in Wahgunyah and anticipating the eventual federation of the states.

* A Victorian MP, John Quick, argued that delegates should meet at a national convention. The motion was relayed to the Premiers Convention in 1895 and this led to Federation in 1901.

* In 1902 three state premiers met at Corowa to discuss using the waters of the Murray for irrigation. This led to the Murray River agreement in 1915.

* In 1903 Corowa officially became a municipality.

The town has its own website: http://www.corowa.nsw.gov.au/visitors/ where maps can be downloaded and there is an official app. There is an excellent North of the Murray website. Check out https://www.visitthemurray.com.au/places-to-go/east/corowaregion/places/corowa. 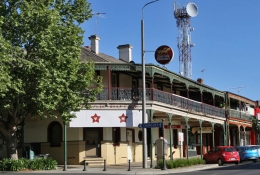 Star Hotel (1866) on the corner of Church and Sanger Streets. 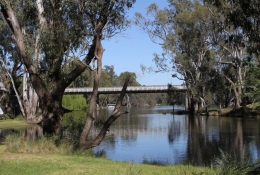 John Foord Bridge (1892) across the Murray River from Corowa to Wahgunyah. 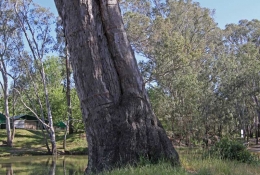 The canoe tree - where Aborigines cut bark from the tree to make a canoe - beyond the Corowa Shire Civic Centre on the banks of the Murray. 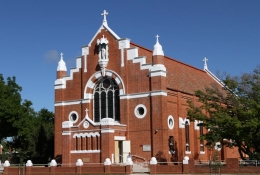 St Mary's Catholic Church (1921) at the top of Church Street. 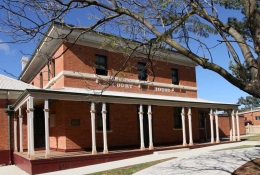 The elegant Court House (1888) where the Federation Conference was held. 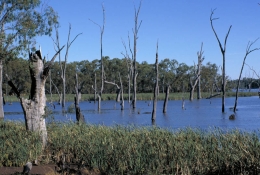 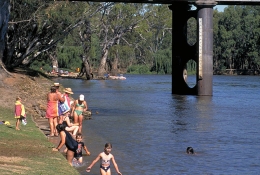 Swimming in the Murray River below the John Foord Bridge (1990)