Corrigin is a small, very typical, wheatbelt town. It was not on the main routes to the west from Perth and consequently the development of the town did not occur until the arrival of the railway and the grain loading facilities. Today the appeal of the town lies in its claim to be the first town in Australia to establish a dog cemetery - a charming and delightful memorial to man's best friend. This was compounded in 2002 when the town assembled a total of 1,527 utility vehicles with a dog on the back tray and established a "Dog in a Ute" world record. A very Australian kind of event ... and record.

Corrigin is located 229 km east of Perth and 295 metres above sea level.

It is widely accepted that "corrigin" was the name given by the local Noongar Aboriginal people to a well in the district.

The Dog Cemetery
Located 5 km kilometres out of town on the road to Quairading the dog cemetery has become the town's premier tourist attraction. Local dog owners have gone to the expense of having quite elaborate headstones placed over the remains of their faithful four legged companions. Thus very human looking gravestones are dedicated to 'Dusty', 'Rover' and 'Spot'. It was started in 1974. By the late 1980s there were about 20 headstones and there are currently over eighty. The town, recognising the importance of the cemetery as an attraction, has clearly marked the cemetery with the statue of a large dog and the town's website informs the world that "Any person is welcome to bury their dog at the cemetery, and many have travelled from different towns to lay their pets in their final resting place."

Corrigin Pioneer Museum
The Corrigin Pioneer Museum has an excellent collection of old agricultural equipment including an original Sunshine harvester and some early steam driven farm machinery. There is a Pioneer Memorial Wall which records all the names of the district's early pioneers. The museum is located on the corner of Kinjin and Kirkwood Streets and is open on Sundays from 2.00 pm - 5.00 pm and Wednesday 1.00 pm - 4.00 pm. Tel: (08) 9063 2066 for more information.

Corrigin Walk Trails
There is a useful, downloadable brochure at http://www.corrigin.wa.gov.au/Assets/Documents/Corrigin-Walk-Trails-Brochure.pdf which provides a map and instructions for five walks around the town.

Corrigin Rock Trail - a trail which leads up onto Corrigin Rock, passes through pockets of bushland and offers panoramic views of the surrounding farmland. It is 1.8 km (return), takes around 30 minutes and, because it passes over the rock, can be rough and uneven in places.
Dam Bush Track - an easy walk of 1.9 km through bushland and beside the town's large water tank. It takes around 30-40 minutes.
Shopping District Track - an easy walk of 3.2 km which takes around an hour and passes through the town and beside the local museum.
Town Site Circuit - a walk of 3.7 km which takes around an hour. It is easy and includes the RSL Memorial Lookout with its World War I Turkish Mountain Gun and the local swimming pool.
Corrigin Cemetery Trail - passes the town cemetery, is 4.1 km long, takes a little over an hour.

Wildflowers and Granite Outcrops
The district, like so much of the wheatbelt, is known for its spring wildflower displays. There are a number of granite outcrops including the Corrigin Rock and a large outcrop known as Gorge Rock which is located 19 km south-east of the town. Like so many of the granite outcrops in the wheatbelt the Gorge Rock was dammed to collect rainwater runoff and for many years was used as the local swimming pool.

* Prior to the arrival of Europeans the land was occupied by the Noongar Aboriginal people.

* Sheep were run in the district as early as the 1860s with the leases for the Parker family extending down into the present Corrigin Shire area.

* A boom in sandalwood prices in the early 1880s saw sandalwood cutters move in to cut out as much of the aromatic timber as they could find.

* It wasn't until the early part of the twentieth century that significant numbers of people moved into the area to take up land and to settle permanently.

* The town's road board, the Kunjin Road Board, was established in 1913.

* The railway didn't arrive until 1914. The apparent reason for this late development was that the major reasons for settlement simply did not apply to the town.

* In 1923 the Corrigin Road Board offices were built.

* In 2003 the town acquired a Resource Centre

Corrigin does not have a specific Visitor Information Centre but the Shire Offices at 9 Lynch Street, Tel: (08) 9063 2203 and the Corrigin Community Resource Centre, Larke Crescent, Tel: (08) 9063 2778 can help with local information.

The town has a useful local website. Check out http://www.corrigin.wa.gov.au/attractions.aspx for details. 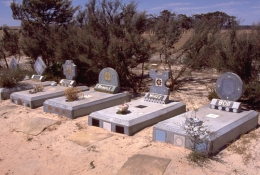 Ordinary dogs, not posh thoroghbreds, are the essence of the Dog Cemetery. 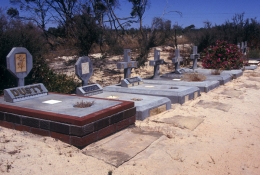 Part of the Corrigin Dog Cemetery 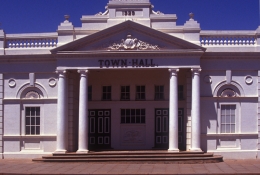 The town's impressive Town Hall was completed as recently as 1929. 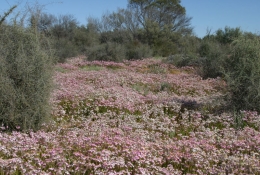 In spring the wildflowers cover the countryside.