The small township of Cowell is located on Franklin Harbour (there is some confusion with some sources insisting on the American spelling 'Harbor') between Port Augusta and Port Lincoln. It is a quiet service centre which has become a popular holiday destination because the sheltered waters of Franklin Harbour are a magnet to anglers who fish for spotted and silver whiting, snapper, squid, mullet, flathead, garfish, snook tommy ruff and blue crabs. It is a pleasant, sleepy town ideal for family holidays. The town is characterised by a broad main street with pine trees and charming, distinctly South Australian architecture.

Cowell is located 489 km north-west of Adelaide via Port Augusta and Whyalla. There is an impressive shortcut by taking the car ferry from Wallaroo to Lucky Bay which is 15 km east of Cowell. Check out http://www.seasa.com.au/ for details.

Cowell was officially gazetted in 1880 by Governor Sir William Francis Drummond Jervois who named the town after Major-General Sir John Clayton Cowell who was, at the time, the Master of the Queen's Household for Queen Victoria. In 1892 he became Lieutenant-Governor of Windsor Castle.

Cowell Foreshore Boardwalk
This is ideal for both swimming and walking. There is an enclosed tidal aquatic area adjacent to the jetty and launching ramp which is ideal for swimming and there is a mangrove boardwalk nearby where visitors can observe the local marine and birdlife.

National Trust Folk Museum
The National Trust Folk Museum, which is located in the Main Street between the Franklin Harbour District Council Offices and the modern Post Office, is housed in the old Post Office and Post Master's Residence which was built around 1882.
The museum's displays include a dining room, kitchen and bedroom furnished in the style common on the Eyre Peninsula at the end of the 19th century. The other rooms house household utensils, photographs, gemstones, shells etc. The museum can be opened on request by contacting the District Council Office next door. An outdoor collection of agricultural equipment is located on the Lincoln Highway (en route to Whyalla) just beyond the main street. The collection includes an extensive display of local farm machinery including a fully restored 1910 Ruston Proctor Steam Traction Engine.

Franklin Harbour Hotel
Just over the road from the National Trust Folk Museum is the charming Franklin Harbour Hotel, originally built as a single storey hotel in 1881 with the second storey being added around 1907. During the course of excavations it was discovered that the hotel was the site where four Aborigines, executed in 1856, had been buried by members of their tribe.

The story of the executions is one of those sad and sickening episodes of frontier violence that Australia tries its best to ignore. By 1853 the McKechnie brothers had taken up land in the Cleve-Cowell area. They established huts where shepherds tended the sheep. These were lonely and isolated. In 1855 a group of local Aborigines attacked and killed a shepherd, Peter Brown, at one of the Wangaraleednie Station outstations. Seven Aborigines (six men and one woman) were tracked and captured. The plan was to take the captives to Port Lincoln and transport them across to Adelaide for trial. While in custody at the Salt Creek Police Station (now known as Arno Bay) the seven managed to escape and a subsequent search only recaptured four of them. The four were shipped to Adelaide where they were found guilty and shipped back to Franklin Harbour for execution.

In his diary an Inspector Holroyd recounted the event which took place on 14 January 1856 in Cowell: 'In the presence of some forty blacks of the local tribe mustered for the occasion by the police, four gallows were erected on the site ... Placed upon the scaffolds, a cap was drawn over their faces, and as the New South Wales convict executioner dropped a white handkerchief, the sailors from the Yatala let go the ropes and the four hung helpless and convulsed. One was quiet in a moment, but the rest kicked and struggled for some time. To complete the job, the hangman caught their legs, pressing them together and hanging on till all was over. At the gruesome sight the wild natives howled and cowered in the sand, then when all was over begged for their fellows' prison clothes. Permission was given for them to take these if they dug the graves, which they did." Over fifty years later the graves were discovered on the site where the Franklin Harbour Hotel now stands.

The Black Stump
On the corner of Main Street and High Street, opposite the Commercial Hotel, is a huge 'black stump' which, as the plaque explains: "The Black Stump. As a New Year prank in 1972, a large stump was placed between two hotels on which signs read 'Best pub this side of the black stump'. The original stump was stolen. Also paying tribute to the pioneer land clearing battles after several fires." The weight is 2060 kg. This larger stump was erected in its place and moved up the street.

Cowell Jade Factory
The history of jade in the Cowell dates from 1965 when a local farmer, Harry Schiller, discovered significant deposits of nephrite jade near Cowell. It wasn't until 1974, when the South Australian government became involved, that the potential of the area was realised. A geological assessment found more than 100 separate jade outcrops in a 9 sq km area which is now known as the Cowell Jade Province. The deposit is recognised as containing about 80 000 tonnes which means that it represents about 90 per cent of the world's known jade reserves. The Cowell jade deposit is recognised as one of the oldest and largest in the world. The majority of the jade from Cowell is green. A small portion is black in colour and this commands the highest price owing to its rarity and ability to take a high polish. Associated with the jade pods are deposits of ornamental marble and carving quality talc. Cowell jade is now exported to countries including India, West Germany, USA, Japan, Canada, Hong Kong, Taiwan, Italy and New Zealand. The Cowell Jade Motel on the Lincoln Highway has a shop, with a wide range of jade jewellery, tel: (08) 8629 2002. Check out http://www.cowelljademotel.com.au/gemstone.aspx for more details.

Fishing
Today Cowell, and particularly Franklin Harbor, has an important Pacific oyster industry and has become a popular place for fishing holidays due to its reputation as a safe fishing destination. The calm waters of the harbour and the Spencer Gulf abound with spotted and silver whiting, snapper, salmon, tommy ruff, mullet, flathead, garfish, and squid and in season it is possible to go night crabbing in the shallows of the harbour. There is a boat ramp and a large jetty with boat mooring.

Franklin Harbor Conservation Park
This is essentially a marine park and a wetland of national importance. It features "one of South Australia’s most important nurseries for King George whiting, as well as for prawns, sardines, scalefish and blue swimmer crabs." The website points out that divers can expect to see "various species of sea dragons, rare types of seagrass, to the unique, large colonies of the stony coral Plesiastrea versipora, which can grow to 3 meters in diameter. The park is also home to rare stromatolites, which are mineral formations often made by blue-green algae and represent some of the oldest examples of life on earth." Check http://www.environment.sa.gov.au/marineparks/find-a-park/upper-spencer-gulf/franklin-harbor for a map and more details.

Mount Millar Wind Farm
Located off the Cowell to Cleve Road the Mount Millar Wind Farm is the Eyre Peninsula’s largest wind farm with 35 turbines which were constructed in 2005 at a cost of $138 million. At the public viewing area the visitor can see the enormous two megawatt wind turbines with a blade diameter of 71 metres on top of 85 metre tall towers. Mount Millar wind farm has the capacity to reduce Australia’s greenhouse gas emissions by up to 168,000 tonnes of CO2 every year. Access is via a steep road. For more information check out: http://www.meridianenergy.com.au.

Port Gibbon
Located 30 km south of Cowell, just beyond the Franklin Harbour Conservation Park, is the historic shipping port of Port Gibbon where once wheat from the Eyre Peninsula was loaded onto clippers and shipped to Europe. Today, 5 km from Port Gibbon, is Point Gibbon where the high cliffs of the area give way to sandhills and reef. South of the car parking area is a small sea lion colony dozing at the water's edge. In 1959 the wheat ketch "Milford Crouch" capsized and sank in these waters with the loss of 6 lives.

* Prior to the arrival of Europeans the area was occupied Narangga Aboriginal people. They now constitute less than 1% of the local population.

* The first European to sight Franklin Harbour was Matthew Flinders who, in 1802, mistaking the harbour for a 'large lagoon', decided that it was not worth naming.

* The harbour was discovered in 1839 by Robert Cock who sailed into it while surveying the northerly section of Spencer Gulf.

* In 1840 the harbour was named by Governor Gawler (Governor of South Australia) after Sir John Franklin (Governor of Tasmania and famous Arctic explorer) who happened to be a midshipman on the Investigator when Flinders unwittingly mistook the harbour for a lake in 1802.

* In 1853 the three McKecknie brothers took up land near the town at Wangaraleednie Station.

* In the 1850s, when the hinterland became settled by wheat and sheep farmers, Franklin Harbour grew in importance as ketches stopped to load the produce and ship it across the gulf.

* The township of Cowell was officially gazetted in 1880 by Governor Sir William Francis Drummond Jervois.

* In 1965 a deposit of jade was discovered in the local area by farmer, Harry Schiller.

* Today Cowell is a quiet little settlement which is a popular holiday resort for anglers  and people wanting a peaceful seaside place to relax.

There is a local website run by the District Council of Franklin Harbour. Check out http://www.franklinharbour.sa.gov.au/page.aspx?u=177. 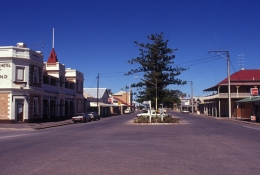 The main street of Cowell. 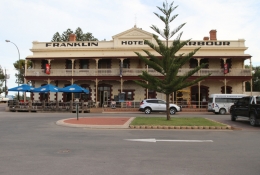 The Franklin Harbour Hotel (1881) at the harbour end of town. 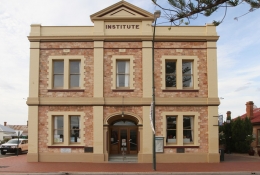 The elegant Institute building in the main street. 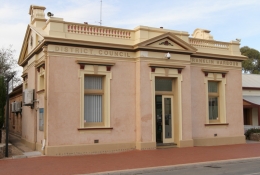 The historic District Council building in the main street. 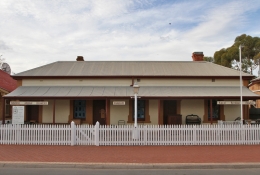 The National Trust Folk Museum in the main street. 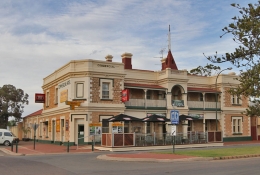 The Commercial Hotel in the Main Street 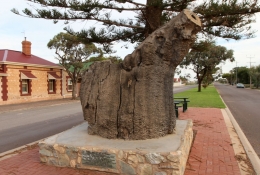 The town's best joke - the Black Stump - now on the corner of Main and High Streets. 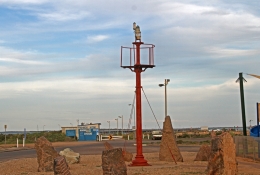 The historic navigation light near the boat ramp at Cowell. 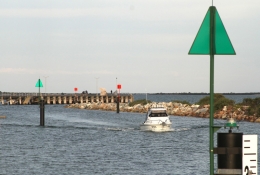 The entrance to the boat ramp beside the jetty at Franklin Harbour. 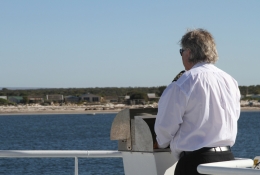 Mooring the Sea SA ferry from Wallaroo at Lucky Bay.