There is a simple secret about Crescent Head: people heading north don't like turning south and the only way to access this beautiful stretch of coastline is to drive to Kempsey and then turn south-east on Crescent Head Road. This "obstacle course" presents no problems to surfers - who are mooching up and down the coast looking for the perfect wave - but it has worked as a deterrent to holidaymakers. Thus this delightful, uncrowded and underdeveloped sleepy little coastal village is characterised by beautiful beaches and a headland which features one of the most spectacular cliffs on the eastern coast of Australia. The town is well-protected environmentally with the Goolawah Reserve and Limeburners Creek Nature Reserve edging it to the north and the south. The result: a little piece of coastal paradise.

Crescent Head is located 437 km north of Sydney via the Pacific Highway and 21 km south-east from Kempsey on Crescent Head Road.

No one is sure how Crescent Head got its name. It is known that as early as 1833 the NSW Calendar and General Post Office Directory recorded: "From Port Macquarie northerly there is a beaten track and the country may present some obstructions to the formation of a road; travelling is not, however, difficult; the tracks follow the coast which is a succession of sandy beaches extending from Port Macquarie to Point Plomer, thence to Crescent Head and then to Trial Bay…”

Crescent Head and Crescent Head Lookout
To reach the headland and the Crescent Head Lookout, turn at East Street, then right into Dulconghi Street and left into Skyline Crescent. Crescent Head is a strange combination of the sublime and the offensive. The headland itself is a deceptive craggy outcrop. And on the top of that headland is a huge, ugly concrete water tower which some enthusiast has tried to modify by painting the base with a nautical-themed mural full of fish and mermaids. To the south, and far below, is a beach with a long, pale arc of sand. Below, on a lower headland, is the solitary grave of Herbert Arnold O'Dell who died on 1 September 1917 at the age of 26 years and 5 months while he was fishing off the rocks at Crescent Head. The views from Crescent Head Lookout are panoramic and spectacular. It is a sheer drop of nearly 100 metres. The view to the south is as far as Point Plomer and to the north it is possible to see Hat Head.

Surfing Crescent Head
The excellent Australia's Surfing Coast website explains the appeal of Crescent Head: "Crescent Head is one of the few places in Australia where the spirit of the 1960s surfing counter-culture lives on, an easy-going “share the ocean” vibe still embraced by the local surfing tribes. Along this magical stretch of coastline north of Port Macquarie are four perfect right-hand point-breaks, tailor-made for malibu riders, grommets and beginners and capable of generating miracle rides of up to 250 metres. Six northern corners along here also produce anything from crazy left-hand wedges to gentle blue fun in the sun. About halfway between Crescent Head and Point Plomer is the brilliantly named Delicate Nobby, a wedge-shaped rock formation that starts just off the beach and spears out into the Pacific. There are rideable beach breaks either side with solid banks that can deliver a fair bit of grunt ... In June 2008, Crescent Head, home of the Dunghutti people, was declared a National Surfing Reserve, the fourth site in Australia to be recognised for its special significance to surfing. Check out http://www.surfthecoast.com.au/CrescentHead for more details and camping suggestions.

Goolawah Reserve
Goolawah Reserve is a narrow 10 km coastal strip to the south of Crescent Head which comprises beaches, seaside bushland with predominantly melaleucas and banksias, and significant sites of importance to local Aborigines. It is an ideal destination for bushwalking and surfing. National Parks describe the reserve as having "biological diversity ... with significant Aboriginal heritage. The beaches are secluded and pure, bounded by exquisite native plant life ... A left-hand point break beckons to surfers, while spectacular rocky shores, reefs and a lagoon provide the ideal setting for snorkelling or swimming. Go bird watching or whale watching, spot dolphins and turtles, or scan the bush for koalas or dingoes." Check out http://www.nationalparks.nsw.gov.au/goolawah-national-park and http://macleayvalleycoast.com.au/great_things_to_do/crescent-head-beaches.

Limeburners Creek National Park
Located 10 km south of Crescent Head, Limeburners Creek National Park is 9,123 hectares of pristine coastal heathlands characterised by banksias, blackbutt wetlands and small pieces of coastal rainforest around Big Hill. The area is ideal for birdwatching, swimming, surfing, canoeing, bushwalking and fishing. At Big Hill there is a loop walk which winds around the summit and provides dramatic panoramas across wave-formed dunes and over the coastline. The area between Big Hill and Point Plomer is important to local Aborigines who occupied the area for 5-6,000 years prior to the arrival of Europeans. There is an historic Aboriginal fish trap at Barries Beach. There are also shell middens, burial sites, a large stone tool working site and a quarry for stone tool production. The reserve's name comes from the early days of European settlement when oyster shells from the creek were burned to produce lime for mortar. Free settlers moved into the area in the 1830s when the penal settlement at Port Macquarie was closed. The area adjacent the creek was declared the Orara Gold Field in 1881 though returns were insignificant. Check out http://macleayvalleycoast.com.au/great_things_to_do/limeburners-creek-national-park/ for more details.

* Prior to the arrival of Europeans the area was inhabited by members of the Dunghutti Aboriginal language group.

* Crescent Head was proclaimed a village in 1894.

* A town slowly developed. It was basically a cheap holiday destination with many fibro holiday homes and a thriving caravan park.

* Today Crescent Head is recognised as one of the finest surfing locations on the New South Wales coast. The headland produces exceptional surfing conditions.

Macleay Valley Coast tourism have a useful and detailed website. Check out http://macleayvalleycoast.com.au/location_listing/crescent-head. 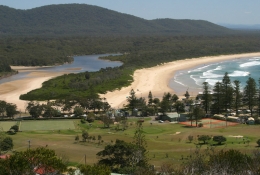 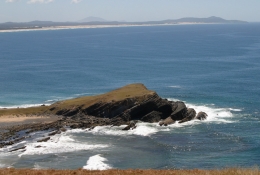 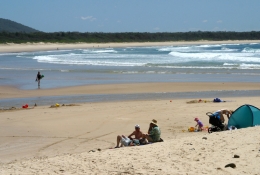 The beach and mouth of Killick Creek at Crescent Head. 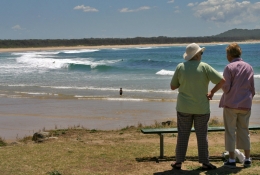 The view north from Crescent Head.