Reputedly the only town in Australia named after a local Aborigine

Crows Nest is a unusual Australian rural town serving the surrounding rural district which produces beef and dairy cattle. The town's uniqueness is a combination of its celebration of Jimmy Crow, an Aboriginal named by early settlers, who lived in a hollow tree; its huge and fascinating Salt Antique store; and its uncharacteristic village green which lies at the town centre. It is reputedly the only town in Australia named after a local Aborigine.

Crows Nest is located 169 km west of Brisbane via Toowoomba. It is 527 m above sea-level.

The plaque beneath the statue of Jimmy Crow on the Village Green explains the town's name: "In the early days when teamsters visited this area Jimmy Crow, an Aboriginal named by early settlers, used a hollow tree as his gunyah. He was relied on for information and directions. This place was used as a camping place by teamsters and travellers and became known as Jimmy Crow's Nest hence the name 'Crows Nest'."

Jimmy Crow
Pause and reflect on the unusual life of Jimmy Crow. His statue stands in the heart of Crows Nest and is a reminder of the friendly relations which existed between some Aborigines and some of the early European Settlers. Crow lived in a hollow tree. He used to advise the bullock teamsters and travellers who passed through the town and he was held in such respect that the town was named after him and the statue was placed in the centre of town to honour him. There is a plaque which explains: "In the early days when teamsters visited this area Jimmy Crow, an Aboriginal named by early settlers, used a hollow tree as his gunyah. He was relied on for information and directions. This place was used as a camping place by teamsters and travellers and became known as Jimmy Crow's Nest hence the name 'Crows Nest'."

Carbethon Folk Museum and Village
North of Salts Antiques on the New England Highway (Thallon Street), is the Carbethon Folk Museum and Village. It currently includes more than twenty buildings. The village includes such gems as the original Ray White Auctioneer building (Ray White has subsequently become a national real estate franchise); a replica of an old one teacher school; an extensive machinery shed; a slab hut; a blacksmith's shop; the Highfields Baptist Church and the remarkable Carbethon homestead which was built in the 1880s. It has been a folk museum since 1978 . It is open Thursday, Friday, Saturday and Sunday from 10.00 am - 3.00 pm. For more information check out http://www.crowsnestmuseum.org.au/ or tel: (07) 4698 1776.

Roger Salt Antique Furniture
Located at 1 Thallon Street, Roger Salt Antiques is housed in an elegant Edwardian building. It is a rarity: an antique shop where, because he prides himself in being an "international importer", Salt has developed an amazing display of items ranging from Vespa motor scooters to old engines, bottles, clocks and antique furniture. The store is open from 9.00 am to 4.00 pm seven days a week. tel: (07) 4698 1266 or check out his Facebook page at https://www.facebook.com/rogersaltantique.

Crows Nest National Park
Located 6 km east of Crows Nest is Crows Nest National Park, 489 hectares of eucalypt country on the edge of the Great Dividing Range which includes the dramatic Crows Nest Falls. There is a simple, easy and predominantly flat, track from the picnic and camping area which passes The Cascades (you have to cross the creek by rock hopping to see them), Kauyoo Pool, Bottlebrush Pool, Crows Nest Falls (which fall 20 metres) and the Koonin Lookout over the Valley of Diamonds where Crows Nest Creek drops into a deep gorge. The walk from the Car Park to Koonin Lookout is 4.5 km and takes around 90 minutes. There are shorter walks to Bottlebrush Pool (2.7 km return) and Crows Nest Falls (2.1 km). A map can be downloaded at http://www.nprsr.qld.gov.au/parks/crows-nest/pdf/crows-nest-np.pdf. The National Parks website encourages visitors to look for wildlife: "Look for platypus in the creek near the picnic area and brush-tailed rock-wallabies on the rocky cliffs along the creek. Be patient and quiet and you may be rewarded. For your safety and to protect the wallaby habitat, stay on the track. Go birdwatching during the day. See pale-headed rosellas, magpies, yellow robins, thornbills, golden whistlers, eastern spinebills, grey fantails or blue-faced honeyeaters. Try spotlighting for sugar gliders, brushtail possums, ringtail possums and greater gliders along the walking track at night. Enjoy the wildflowers in spring." Check out http://www.nprsr.qld.gov.au/parks/crows-nest/about.html as the Crows Nest Falls are sometimes closed because of the danger of rockfalls.

The Farmers Arms
Located on the New England Highway south of Crows Nest and only 10 km from Toowoomba is the tiny settlement of Cabarlah where the only building of significance is the single-storey, timber Farmers Arms which has had a continuous license since 1863. This makes it the longest holder of a liquor license in Queensland, tel: (07) 4696 6202.

* Prior to the arrival of Europeans the area was occupied by Dungibara Aborigines.

* By 1849 James Pearce had taken up land in the area but he failed and his pastoral holding was subsequently broken into smaller lots.

* In 1876 Crows Nest was officially declared a town. It was surveyed the following year.

* Gold was discovered in the district in 1884 on the Cressbrook Creek.

* By 1886 a branch line from the main Toowoomba line reached the town.

* In 1902 Ray White established himself as a local real estate agent. The name has since become one of Australia's most widely recognised in the real estate business.

* In 1942 at Milne Bay in New Guinea a Crows Nest local, John French, distinguished himself in battle and was awarded a posthumous Victoria Cross.

* In 1969 the statue to Jimmy Crow was unveiled by the Queensland Minister for Labour and Tourism.

There is a detailed local website with information about accommodation and eating. Check out http://www.crowsnest.info/ for details. 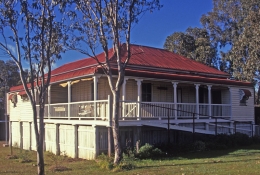 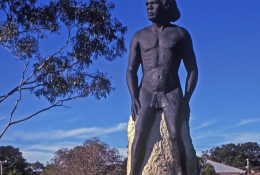 The statue of Jimmy Crow after whom Crows Nest is named. 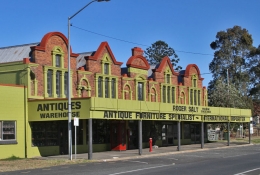 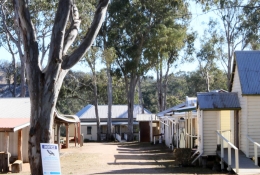 The re-created main street at the Carbethon Folk Museum and Village. 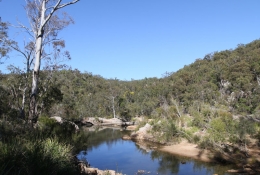 The pool above the Cascades near the Crows Nest Falls. 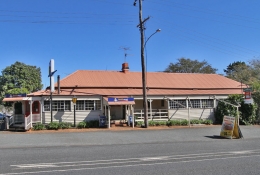