Crystal Brook is a quiet rural service centre in the heart of some of South Australia's most productive sheep and wheat country. It describes itself as the town "Where the Flinders Begin". The charm of this quiet town lies with its shady peppercorn trees and its feeling that time has stood still.

Crystal Brook is located 200 km north of Adelaide and 111 metres above sea level.

The explorer, Edward John Eyre, passed through the district in 1839 and, being a questionable speller, recorded on his map 'Chrystal Brook'. The spelling was corrected to Crystal Brook when William Younghusband and Peter Ferguson established a pastoral property by that name - 'Crystal Brook Run' - which extended to Port Pirie and covered 560 square miles (145,000 ha).

Crystal Brook Heritage Centre
Located at 49 Brandis Street (just off the main street), and dominated by the huge Rosella Pickles sign, this museum, the first two storey building in the town, was originally owned by E. H. Hewett Baker and completed in 1875. It is a typical local museum with interesting displays of machinery and farming equipment. There is an impressive historic photograph exhibition. Because it was once a bakery it has a rare underground oven. There is a very extensive description of the museum's contents at http://community.history.sa.gov.au/crystal-brook-heritage-centre. It notes that the museum includes: "a variety of domestic items on display used by pioneer families including crockery, dressmaking, knitting, rag and stocking rugs, sewing machines and wedding dresses.  There are also items relating to medicine, education, childhood and freemasonry and miscellaneous collectables such as cameras and sea shells. As well as a library containing a collection of newspapers and books relating to local people, events and the defence forces, there are also interesting displays relating to Crystal Brook’s history such as a 1930s rail yard exhibit featuring a stationmaster’s uniform; and a curious small cast iron building that was originally sent from Scotland in prefabricated form to Gladstone, and then to Crystal Brook as a Police Trooper’s hut and finally transferred to the Engineering and Water Supply, as a works office before being donated to the museum. A remarkable object in the collection is a chrome washing/drying machine from the United States, the first of its type to be imported to South Australia in 1914. However the museum’s most significant item is the scrapbook of congratulatory telegrams and letters belonging to Crystal Brook’s most famous son, Corporal Arthur Percy Sullivan (1896–1937) as well as a replica of his Victoria Cross, the original being at the Australian War Memorial, Canberra." It is open from 2.00 pm - 4.00 pm Sundays or by appointment. For more details - (08) 8636 2396.

Memorial to Arthur Percy Sullivan VC
Located in the main street (in the centre median strip) is a small piece of rock celebrating Arthur Percy Sullivan (1896-1937), a man who was born in Crystal Brook, volunteered for the AIF in World War I, and joined the British Army after the war and won a VC in the post-World War I campaign against the Russians during the Russian Civil War. His Victoria Cross was awarded for conspicuous bravery. The citation was "For most conspicuous bravery and devotion to duty on the 10th August 1919, at the Sheika River, North Russia. The platoon to which he belonged, after fighting a rearguard covering action, had to cross the river by means of a narrow plank and during the passage an officer and three men fell into a deep swamp. Without hesitation, under intense fire, Corporal Sullivan jumped into the river and rescued all four, bringing them out singly. But for this gallant action his comrades would undoubtedly have been drowned. It was a splendid example of heroism, as all ranks were on the point of exhaustion, and the enemy less than 100 yards distant." It was an award for bravery in a forgotten war.

The Big Tree Goanna
The Big Tree Goanna, unlike many other big things, actually looks realistic and only a few times larger than the real thing. The sign read 'Varanus varius, vulnerable species native to this area. This goanna is depicted in an aggressive pose. Goannas and other reptiles (be careful of the brown snakes) can be seen at Bowman Park. Constructed and erected by local voluntary labour for the benefit of our district.'

Bowman Park
Located 4 km east of Crystal Brook, Bowman Park is traversed by the Heysen Trail and offers visitors an opportunity to walk a short section of the trail at the southern end of the Flinders Ranges. The park also has historic buildings which date back to 1847, a native garden, a number of walking trails and a lookout. Use of the park area dates back long before Europeans when the local Nukunu people used the area as a ceremonial ground and meeting place because it had the natural advantages of reliable water, an ochre pit and an amphitheatre. For details check out https://www.bowmanpark.com.

Heysen Trail
The 1,200 km Heysen Trail which runs from Cape Jervis to Parachilna passes through Crystal Brook. The Heysen Trail website describes this as "Section 38: Bowman Park to Mount Zion noting 'Beginning as a pleasant walk along the Crystal Brook, past the southern most hills of the Flinders Ranges, the Trail gradually climbs to the top of the range to reveal views over Port Pirie and Spencer Gulf." It is a total of 16 km. For more details check out https://heysentrail.asn.au/heysen-trail/sections/bowman-park-to-mt-zion. There is useful information on accommodation on the Crystal Brook section of the trail at https://heysentrail.asn.au/heysen-trail/accommodation/provider/crystal-brook.

* Prior to the arrival of Europeans the area was home to the Nukunu Aboriginal people.

* The area was first explored by Edward John Eyre who passed through the district in 1839.

* In the 1840s William Younghusband and Peter Ferguson established a pastoral property by that name 'Crystal Brook Run', which extended across to Port Pirie and occupied 560 square miles (1450 square kilometres).

* Younghusband and Ferguson sold this holding to the Bowman Brothers in 1852. The main homestead, Bowman Park, is now part of Bowman Park.

* By 1873 the township of Crystal Brook had been surveyed and proclaimed.

* The District Council of Crystal Brook was established in 1882.

* In 1890 the Beetaloo Reservoir became the main supplier of the town's water.

* In 1919 local man, Arthur Percy Sullivan, won a VC for bravery in the Russian Civil War.

* In 1942 it became the location of the RAAF No.31 Inland Aircraft Fuel Depot.

* In 1997 the town became part of the Port Pirie Regional Council. 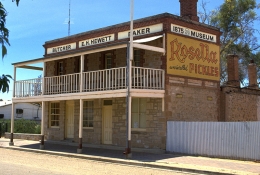 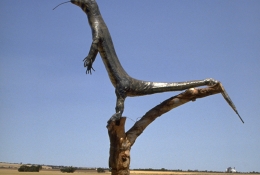 The goanna sculpture at Crystal Brook