Cuballing is a tiny rural township which never really grew to become an important service centre. The explanation is that in the 1880s there was a rumour that the town was going to become the main junction where the railway lines from the north and the east met. But this never happened. Narrogin, which had a better water supply, became the rail junction and, before it really got started, Cuballing began to die. Today the town is important because of its access to the remarkable Dryandra Woodland, one of the largest remaining areas of natural woodland in the Western Australian wheatbelt and a wonderland of exotic Australian marsupials which most Australians have never heard of.

Cuballing is located 191 km south-east of Perth on the Great Southern Highway.

Cuballing is a variation on the local Aboriginal word "cooballing" which was used to describe Cooballing Pool which was discovered by John Forrest in 1870. No one is sure exactly what the Aboriginal word means.

Historic Buildings
Cuballing has a small number of interesting old buildings most of which are in or near Campbell Street. There is the Roads Board which dates from 1898; the Western Australian Bank, now a private residence, which dates from 1903; St Peters Church, also a private residence, which was built in 1911 and the Post Office (now a private home), the Agricultural Hall (built in 1912 and costing £890) and the Hotel all of which date from 1912.

Cuballing Restored Vintage Machinery Display
On the road into town (the Great Southern Highway) there is a collection of restored vintage farm machines - old tractors, trucks and other equipment - which can be inspected by contacting the Shire of Cuballing on tel: (08) 9883 6031.

Horse Sculpture at the entrance to Cuballing
At the southern and northern entrance to Cuballing there is a sculpture, backed by galvanised letters (CUBALLING) and a rusty corrugated iron wall, of a horse. If you look closely you will notice that the sculpture is made entirely from horse shoes. It was made by Shire employee Tim Bradford.

Dryandra State Forest and Barna Mia
The Dryanda Woodland, also known as the Dryandra State Forest, is 28 000 ha of woodland surrounded by cleared wheatbelt country. It is located 24 km west of Cuballing via the Cuballing Road West and Wandering-Narrogin Road. The forest is one of the largest remaining areas of natural woodland in the Western Australian wheatbelt and, as such, is a rare opportunity to experience what the area was like before it was cleared. Here are stands of wandoo and powderbark, pockets of jarrah and marri, some dryandra heath, mallee and rock sheoak. In these natural forests are colonies of such rare mammals as the small kangaroo-like woylie, tammar wallabies, numbats, honeyeaters, honey possums and pygmy possums. There are also over 100 species of bird, including the mallee fowl.

Barna Mia and Nocturnal Tours
Many of the native animals in the area are nocturnal and the best way to see these rare and unusual Australian creatures is to visit 'Barna Mia', an animal sanctuary located in the heart of the Dryandra woodlands. Check out https://parks.dpaw.wa.gov.au/site/barna-mia-nocturnal-wildlife-experience for details. This website explains: "A tour guide takes visitors on a delightful journey through the sanctuary. Using specially placed lights, you can see threatened native animals such as dalgyte, woylie, wurrup, quenda and boodie. Many of Western Australia's native mammals have been eradicated from their former habitats because of predation by cats and foxes, cleared vegetation and changed fire regimes. Preservation of Dryandra's 28,000 hectares of bushland enabled several native species to survive. Furthermore, Dryandra is once again becoming home for other indigenous animal species that were locally extinct. The Parks and Wildlife Service's "Return to Dryandra" project aims to reintroduce native animals to former habitats by eliminating feral predators and establishing breeding programs. Six marsupials - the bilby, woylie, mala, marl, quenda and boodie - are breeding in a fenced enclosure that excludes feral predators. New populations are released into Dryandra Woodland and other areas of bushland in the hope that they will re-establish themselves in their former habitats. Tours operate several times per week beginning after sunset. Actual start times vary seasonally. March to November: Monday, Wednesday, Friday and Saturday (except on public holidays).
December, January and February: Friday and Saturday only (except on public holidays).
The tour comprises a short talk in an auditorium before being given red light torches and taken out to feed the animals which live in 4 ha protected areas (predator-proof sanctuary) which surrounds the centre. Barna Mia can be accessed by driving from Narrogin on the Narrogin-Wandering Road north-west for 26 km. Then travel west along Tomingley Road from the Dryandra National Park main entrance and continue past Dryandra Village. About 45 minutes before a tour, a sandwich-board sign is placed on Tomingley Road to mark the turnoff at Marri Road. Bookings are essential, tel: (08) 9881 9200. Don't expect to take photographs: the sample here was taken at 3200 ISO at 1/15 of a second. Oh, yes, and don't expect to see a numbat - they tend to be daytime animals.

Bushwalks in the Dryandra National Park
The Woodland has, according to Trails WA, a total of eleven walks ranging from a one kilometre loop to a 12.5 km full day loop walk.
They are:

Lol Gray Trail - a wildflower experience which is a 12.5 km loop. Check http://trailswa.com.au/trails/lol-gray-trail for details and a map.

Kawana Trail - an easy 3.3 km loop through wildflower country where you might see echidnas, dryandras and birds. It  will take between 1-3 hours depending on how long you linger. Check http://trailswa.com.au/trails/kawana-trail.

Wandoo Trail - a 2.7 loop walk through wandoo woodland with the possibility of seeing a numbat and excellent bird watching. Check http://trailswa.com.au/trails/wandoo-trail.

Woylie Walk - a 5.5 km loop easy walk through the woodland where there are 25 mammals, 100 bird species and 50 reptiles. Check http://trailswa.com.au/trails/woylie-walk-dryandra-woodland.

Wandoo Night Walk - a 1 km loop which Trails WA describes as "A short night walk with markers that reflect torchlight. Look for nocturnal animals such as woylies, tammar wallabies, brushtail possums, tawny frog-mouths and owls among the wandoo trees and heath vegetation." Check http://trailswa.com.au/trails/wandoo-night-walk for more details and a map.

Darwinia Drive Trail - a 23 km drive which explores the interdependence between the natural systems of the area through a series of five interpretative information bays. Check http://trailswa.com.au/trails/darwinia-drive-trail.

Breakaway Walk - a 1 km loop which offers excellent opportunities to see the difference between the developed farmland and the dryandra woodland. Check http://trailswa.com.au/trails/breakaway-walk for details and a map.

Fire Tower Walk - the Trails WA site explains: "Dryandra Woodland features the largest area of remnant vegetation in the western Wheatbelt and forms part of an international biodiversity ‘hotspot’ where more than 850 species of plants can be seen. The woodland of wandoo, kwongan (the Aboriginal word for heath and shrublands), mallee, sheoak thickets and plantations of brown mallet is home to the numbat, Western Australia’s state fauna emblem. It is also home to other threatened and remarkable fauna such as the red-tailed phascogale, woylie, western grey kangaroo, tammar wallaby, brushtail possum and echidna as well as a diverse variety of reptiles and insects." Check out http://trailswa.com.au/trails/fire-tower-walk for more details and a map.

* In the 1880s there was a rumour that Cuballing was going to become the main junction town where the railway lines from the north and the east met.

* By 1889 the area had eleven European residents.

* By 1903 the Cuballing Road Board was meeting regularly.

* In 1904 the local Methodist Church was consecrated.

* In 1906 Narrogin was chosen as the rail centre because of its water supply. By this time Cuballing had two butcher shops, the Cuballing Hall, Post Office, Cuballing Coffee Palace, WA Bank, National Australia Bank, two blacksmiths, Church of England, Methodist Church, a boarding house and the Hotel.

* In 1911 St Peters Church of England was consecrated.

* By 1920 Cuballing was dying and Narrogin was surging ahead.

* In 1929 Cuballing School closed due to lack of students.

* By 1998 local school children were travelling to Narrogin or Pingelly.

There is a useful council website. Check out http://www.cuballing.wa.gov.au. 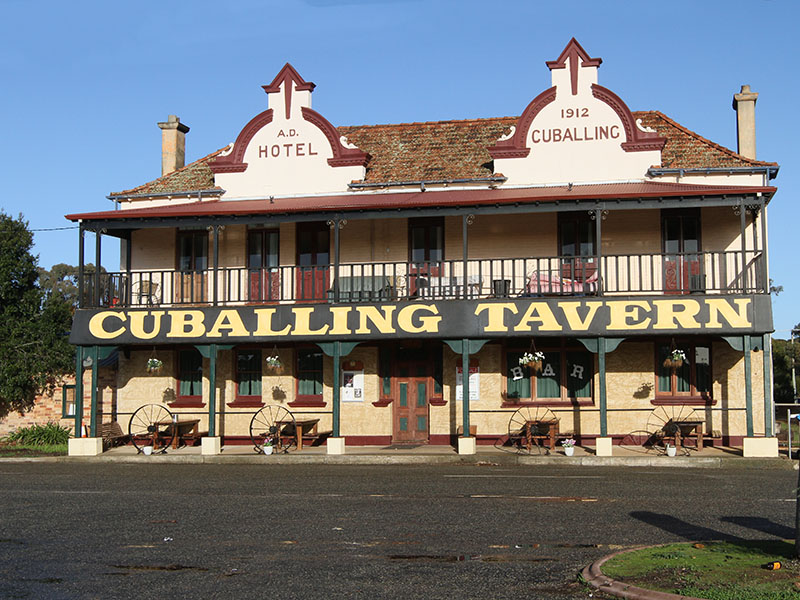 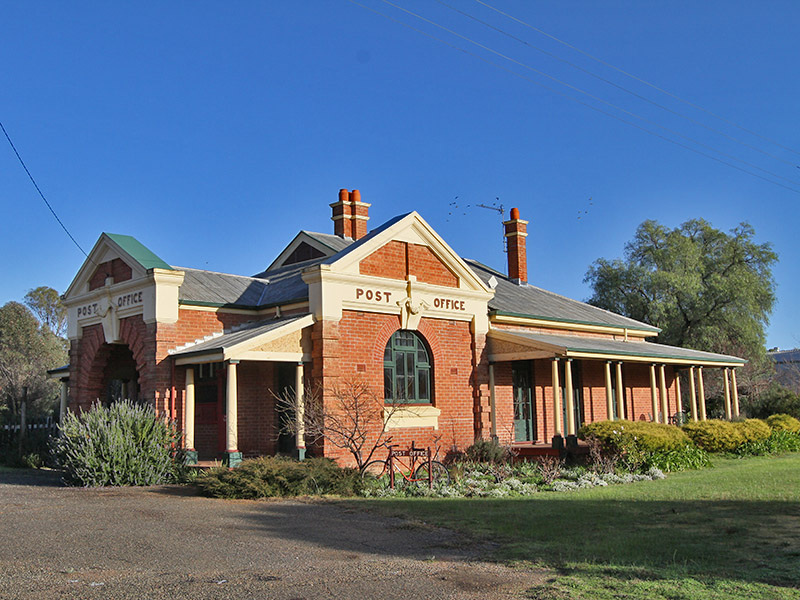 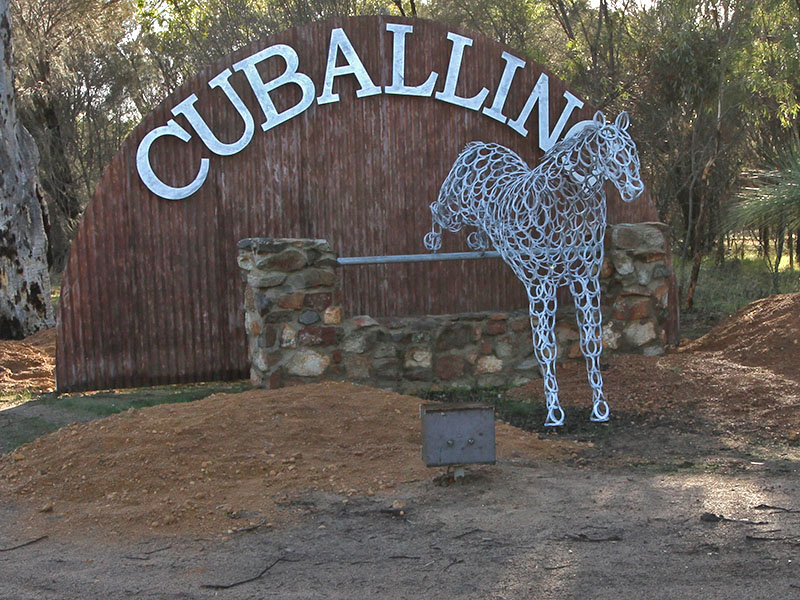