The tiny village of Cullen Bullen, which is little more than a hotel and a few houses for people who work in the local mines and the power stations, is located on the main road from Sydney to Mudgee. The central appeal of the town lies in the particularly beautiful Wongan Valley and Gardens of Stone National Park, both of which are accessible by 4WD and lie to the east of the town.

Cullen Bullen is located on the Mudgee Road, via the Great Western Highway, 166 km north-west of Sydney and 29 km north of Lithgow.

The first land grant was taken up by Robert Dulhunty who was on good terms with the Wiradjuri Aborigines and chose 'Cullen Bullen' which are Wiradjuri words which are supposed to mean 'lyre bird'.

Gardens of Stone National Park
The Gardens of Stone National Park is an inaccessible, but spectacular park, which is 177 km from Sydney via the Great Western and Castlereagh Highways. Access to the park is via a 4WD road at Ben Bullen which is signposted 'Gardens of Stone National Park'. It leads through to the Wolgan Valley Road which heads north-east from Lidsdale (on the Castlereagh Highway) to the historic mining settlement at Newnes. There are useful maps at http://www.nationalparks.nsw.gov.au/visit-a-park/parks/gardens-of-stone-national-park/visitor-info#Getting-there-and-parking.
Quite unlike the rest of the Blue Mountains (it is at the very edge of the mountains) the Gardens of Stone National Park is a very beautiful wilderness area of limestone outcrops, precipitous sandstone cliffs, pagoda-like rock formations and a diversity of fauna and flora. The area is ideal for bushwalking, particularly in the MacLeans Pass area and around Donkey Pass, although there are no marked trails or facilities. You can walk to Pantoneys Crown from Baal Bone Gap.
Of particular interest to 4WD enthusiasts is the Ben Bullen Trail which, as the National Parks site notes, "turns Gardens of Stone National Park into a spectacular adventure for driving enthusiasts. Suitable for high clearance and well-equipped 4WDing, the trail snakes along the Great Dividing Range, through Ben Bullen State Forest, and into the park. The 4WD trail passes steep sandstone cliffs along the way, with scenic views over the Wolgan and Capertee valleys." A sensible starting point, with lots of good advice, is the National Parks and Wildlife Service - Blue Mountains Heritage Centre, Govetts Leap Road, Blackheath, tel: (02) 4787 8877.

* Prior to the arrival of Europeans the district was occupied by the Wiradjuri Aboriginal people.

* The first European in the district was James Blackman who surveyed a roadway from Wallerawang to Mudgee in 1821.

* Allan Cunningham, the well known explorer, investigated the flora and fauna of the area in 1822-23.

* The first land grant was taken up by Robert Dulhunty who built a homestead and began grazing sheep and cattle. Dulhunty also took up the first grant at what is now Ben Bullen north of Cullen Bullen.

* By the late 1840s the road to Mudgee had improved as a result of the discovery of gold at Hill End and Sofala.

* The village of Cullen Bullen probably started as one of a number of stopping places on the road to the goldfields.

* In 1861 a post office was opened at Cullen Bullen. Thomas Loneragan married the postmistress (Margaret Hart) and the business moved over the road into Loneragan's house, where it stayed until 1914. It was also a store and provided meals and accommodation for passengers on the Cobb & Co coach service.

* The railway line to Mudgee made the area's coal commercially viable and the first coal mine opened in 1880.

* The railway was extended to Capertee in 1882. It ran to the west of Cullen Bullen.

* The Cullen Bullen Coal and Coke Company began operations in 1885.

* A railway siding was constructed for the Coal and Coke company in 1889.

* The local school was moved to its current site in 1895.

* In 1899 the Great Western Mine began operations at Tyldesley, just west of the village.

* The Renown Colliery opened in the early 1920s.

* The Great Depression of the 1930s saw extensive lay-offs and industrial unrest. At this time the population of the town was around 1000.

* Continuous mining was introduced in the 1950s. Local mines found it hard to compete and they began to close from 1956. 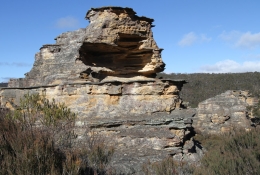 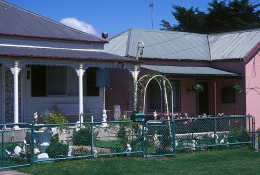 Charming cottages in the tiny village of Cullen Bullen 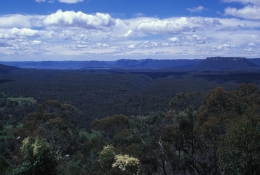 View across the Gardens of Stone National Park from the Castlereagh Highway north of Cullen Bullen. 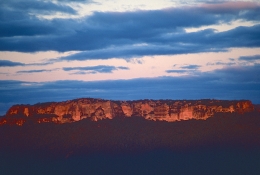