Cummins is a typical small Eyre Peninsula wheatbelt town which straddles the local railway line. The features which characterise every Australian wheatbelt town - the bulk grain silos, the railhead, the solitary pub - inevitably define the town however, unlike most wheatbelt towns, Cummins has some beautiful stone houses as well as a modern flour mill.

Cummins is 68 m above sea level and located 640 km west of Adelaide via Port Augusta. It is located 65 km north of Port Lincoln in the heart of the Eyre Peninsula.

Cummins was named after William Patrick Cummins who was a member of the South Australian Legislative Council from 1896-1907.

The Statue of the Wheat Lumper
In a park (now a children's playground) near the town mill is an impressive statue of a wheat lumper with an 80-85 kg wheat bag on his shoulder. The signage at the statue explains: "Bulk handling started on Eyre Peninsula in the late 1950s. Prior to that all grain and fertiliser was handled in bags. Over the next decade silos were built all over Eyre Peninsula and bagged grain handling was gradually phased out. Grain bags were all hand sewn. Wheat bags weighed 80-85 kgs and were stacked 22 bags high at the highest point. It was very hard manual labour and also required a huge amount of skill. When stacks were loaded onto rail trucks up to 26 per minute were taken on the lumper's shoulder and dropped into place in the rail trucks. Cummins lumpers developed the use of wooden slides to achieve the quickest and most efficient method of pulling a stack down. Once bags were placed on rail trucks they were railed to the port at Port Lincoln. All grain had to be re-handled before being loaded onto ships for export."

A Tree With A Difference
Located 20 km south of Cummins and 41 km north of Port Lincoln on the Tod Highway is one of those truly quirky "tourist" attractions. Apparently, after the Eyre Peninsula bushfires in 2005, a boot mysteriously appeared in the branches of a tree on the Tod Highway. Slowly this one object grew as backpackers and travellers added a boot or shoe to the collection. Today there are literally hundreds of boots, shoes, runners, sandals (all kinds of footwear) on the tree which is located on the eastern side of the road.

* Prior to the arrival of Europeans the area was occupied Narangga Aboriginal people.

* Wheat farmers moved into the district in the late 19th century

* The district was settled as late as 1904 when farmers moved into exploit the rich farmland.

* In 1907 a railway line from Port Lincoln was completed.

* The town became the headquarters of the District Council of Lincoln.

* Bulk handling of wheat started in the town with the construction of the grain silos in the 1950s.

* In 2005 the Eyre Peninsula was ravaged by bushfires.

There is no Visitor Information Centre in Cummins.

There is a local website - http://www.visitcummins.com - which has information about the district. There is also http://www.exploreeyrepeninsula.com.au/destinations/lower-eyre/cummins which has details of the attractions. 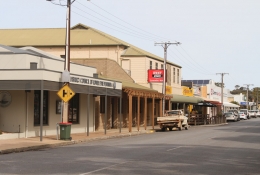 The sleepy main street of Cummins. 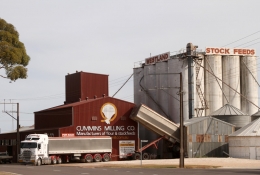 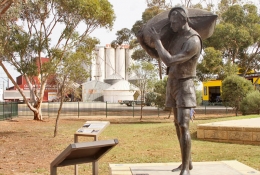 Statue of the wheat lumper in the park near the flour mill. 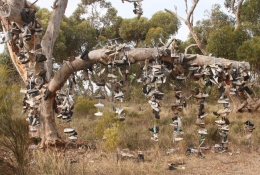 The "boot tree" 20 km south of Cummins on the Tod Highway.