Cunderdin is a small wheatbelt town on the road between Perth and Kalgoorlie. It main claim is that the great water pipeline from Mundaring to Kalgoorlie passes through the town and the old No.3 Pump Station, now run by the National Trust, has been turned into an impressive museum. Only 24 km to the west is the tiny town of Meckering which was the scene of a devastating earthquake (a rarity in Australia) in 1968 which destroyed houses and split the landscape with a deep fault line.

Cunderdin is the Noongar name for the hill which lies to the south of the town. It is thought to derive from 'quenda', the name for the brown bandicoot although other suggestions include 'cunder' meaning 'big turkey' or 'Cunderdin' which means 'place of flowers'. In short, no one is sure.

Cunderdin Museum - No.3 Pump Station
This is a remarkable and memorable museum. Visitors can learn about the Pump Station and the grand engineering achievement of the 560 km long water pipeline which was designed and built by C Y O'Connor and which ran from Mundaring to Kalgoorlie. They can also experience, through a very clever simulation, what it was like in 1968 when the small town of Meckering was hit by a violent earthquake.

The museum, operated by the National Trust, also has extensive displays of farm equipment which encompass the history of wheat harvesting, the history of tractors, and includes such unusual items as an iron tyre shrinker which was used for wagons, drays, spring carts and sulkies.

The main exhibition is housed in the former No 3 Steam Pumping Station which is a large red brick building with a tall chimney. It was constructed in 1902 to house the equipment which pumped the water along the pipeline to the goldfields. Although the steam engine on display was transported from No 7 Pumping Station it is in pristine condition. It is also possible to enter the base of the pumping station chimney. The size of the pumping station's interior has allowed for some very dramatic displays including a Tiger Moth aeroplane which hangs from the roof, a large piece of wooden pipe (it was used during World War II when metal was in short supply) and a tent which accurately recalls the harsh life led by gold prospectors. The highlight of the museum is the Quake Room (sometimes called the Interactive Earthquake House) where visitors can experience a simulation of the famous Meckering earthquake. The museum is open from 10.00 am - 4.00 pm seven days a week.

Meckering
Located only 24 km west of Cunderdin is the tiny settlement of Meckering which, at 10.59 am on 14 October 1968, was struck by an earthquake which measured 6.8 on the Richter scale. It was one of the worst earthquakes in Australia's history splitting the countryside with a deep gash which can still be seen (it is marked by a sign which says 'Earthquake Fault Line') about 4 km west of the town on the Great Eastern Highway. The highlight of any visit is the sad fate of the house known as Salisbury which was flattened by the earthquake. It lies to the north of the main road and is clearly signposted. The sign outside the ruin includes "before" and "after" photographs and the text explains: "Salisbury, an old stone wall homestead built from local stone in 1904 by Mr Harry Sermon, was the home of Mr & Mrs Graham Snooke. At 10.59am on October 14th 1968 the homestead was destroyed by the Meckering Earthquake. Mrs Snooke, in rescuing her 17 month old daughter Debbie from her cot, considered it a miracle the wall nearest her cot fell outwardly, and inwardly onto the cot."

* Prior to the arrival of Europeans the area around Cunderdin had been inhabited for tens of thousands of years by the Ballardong Noongar people.

* The first European to explore the area was Charles Hunt who reached the district in 1864 and returned in 1865 to blaze a track, connecting a series of waterholes, which became known as 'The Old Goldfields Road'.

* By the late 1860s sandalwood cutters and itinerant shepherds were in the area.

* In 1865 one of the early settlers, E. J. Clarkson, was killed by Aborigines and it was decided to establish a police outpost at Youndegin 19 km south of the present town. The police outpost, which is still standing, was built out of stone and mud with a thatched roof and a nearby York gum tree was used as the lockup. A Constable Allerly was the first police officer in charge of the outpost.

* In 1880 Constable Alfred Eaton arrived to take up duties.

* The 1888 goldrush to the Coolgardie-Kalgoorlie area saw miners travelling through the area on their way to the goldfields. Around this time Constable Eaton built the Youndegin Arms to serve the passing trade. Among the food it offered was parrot pie - which was considered something of a delicacy.

* The railway passed to the north of Youndegin and by 1894 the pub was forced to close. Eaton left the police force and become the first farmer in the Cunderdin district.

* In 1896 a reservoir to supply water for steam-driven locomotives was built at Cunderdin.

* In 1902 No 3 Pump Station came into operation. Some time before its completion C Y O'Connor, the engineer who designed and built the pipeline, committed suicide on South Fremantle Beach as a result of "random and uninformed, irresponsible and vicious" personal attacks.

* By 1905 the No.2 Rabbit Proof Fence, an attempt to control a plague of rabbits, had been built from Port Ann on the south coast to Cunderdin - a distance of 1164 km.

* In 1906 the town of Cunderdin was officially gazetted.

* During the 1930s the steel pipes on the water pipeline were replaced by wooden pipes for 75 km east of Merredin.

* During World War II Cunderin was used as a training area for pilots.

* In 1956 the steam powered No 3 Pump Station was replaced by an electricity powered pumping station.

* At 10.58 am on 14 October 1968 the town of Meckering was struck by an earthquake which measured 6.9 on the Richter scale. No one was killed. Twenty people were injured and 60 of the town's 78 buildings were damaged or destroyed. Not surprisingly, the water pipeline burst.

The town has its own website - http://www.cunderdin.wa.gov.au/ - but it is mostly concerned with local shire business. 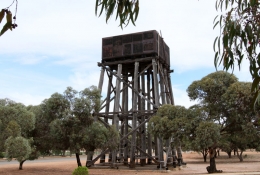 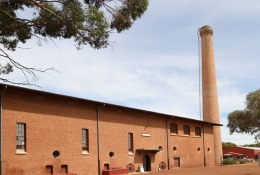 No. 3 Pump Station Museum in Cunderdin 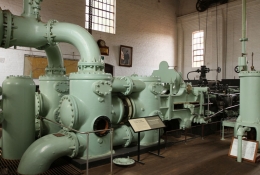 The 8 ton Worthington pump could pump more than 20 million litres a day. This one was located at No. 7 Pumping Station at Gilgai. 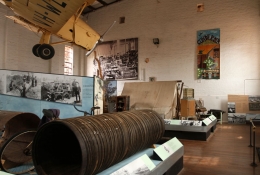 The old timber pipes, a Tiger Moth from World War II and a tent re-creating the Goldrush era. 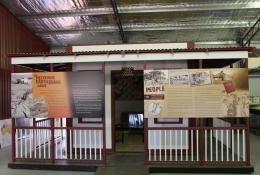 The Quake House at Cunderdin Museum where visitors can experience a simulated earthquake. 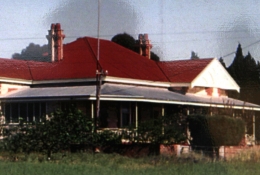 Salisbury, a stone house built in 1904, as it was before the Meckering Earthquake. 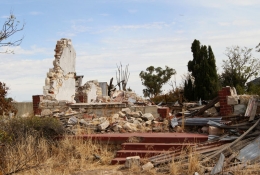