Cygnet is in the heart of an important apple, cherry and berry growing district. Over the past thirty years it has successfully mixed alternative lifestyle activities such as woodturning, wholefoods shops, craft activities and holiday cottage accommodation with more traditional dairy cattle, orchards, mixed farming and sawmilling. It is an area of such richness that the recent SBS cooking/lifestyle series Gourmet Farmer showcased both the area and its presenter, Matthew Evans's, love of local fresh produce and cuisine designed to make enthusiastic foodies go weak with delight.

In 1793 the French explorer Bruni D'Entrecasteaux sailed into the Huon River and named the bay the Port des Cygnes Noir (the Port of Black Swans) because there were large number of swans in the river. This name was officially changed to Lovett but in 1915 it became Cygnet.

Cygnet Living History Museum
Established in 2000 the museum, located at 37 Mary Street, Cygnet (tel: (03) 6295 1394) features photographs and artefacts pertaining to the history of the Cygnet region and the wider Huon. Visual displays which change quarterly, are used by the museum to highlight topics of the area's unique local history, including indigenous culture, settlement and establishment of the region, historic buildings, wooden boat building, timber and other industries, festivals, probation stations and the convict era. The Museum is housed in an historic church building. It is open seven days a week - 10.00 am - 3.00 pm.

Admiring the Scenery
The main appeal of Cygnet and the surrounding district is that it is genuinely very beautiful and the drive around the coast from Hobart down the D'Entrecasteaux Channel and then up the Huon Valley to Huonville is not only scenic and peaceful but, along the way, there are places that are ideal for picnics, fishing, bushwalking and boating. Walking on the beaches at Randall's Bay, Verona Sands, Gordon and Woodbridge is a delightful way to experience the beauties of the coastline.

* Prior to European settlement the Huon Valley was home to members of the Nuenonne Aboriginal language group.

* The French explorer, Rear Admiral Bruni D'Entrecasteaux sailed up the Huon River in 1793 and named the narrow bay which runs up to Cygnet, Port des Cygnes Noir (the Port of Black Swans) because he observed a large number of black swans in the area.

* The district's first orchard was planted at Petchey's Bay in 1836 and four years later Port Cygnet was surveyed.

* In 1845 convict probation stations were established at  Port Cygnet, Lymington and Nicholls Rivulet (it is a misspelling of William Nichols name) and, not surprisingly, the population rose dramatically although three years later, in 1848, the convict stations were in decline.

* With the decline of the convict probation station free settlers moved into the area.  By 1850 Cygnet had a school and by 1854 it had a post office.

* In 1862 the town was officially named Lovett. It continued to be known as Port Cygnet and eventually in 1915 Lovett was officially changed to Cygnet.

* Today Cygnet is still a rich agricultural area but the arrival of people seeking a quiet, alternative lifestyle has enriched the local economy.

A detailed history of Cygnet can be found at http://tww.id.au/cygnet/history.html 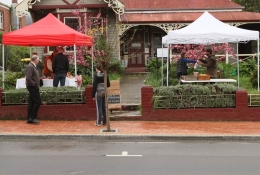 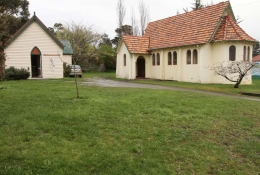 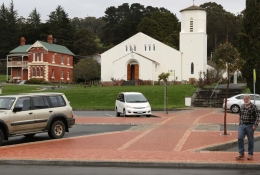