Destination made famous by the iconic Daly Waters Pub.

Daly Waters is essentially a fancy name for a roadhouse which is the local, and famous, Daly Waters Pub. Travellers making the long journey up the Stuart Highway are persuaded that the pub is unique and worth stopping at. It has an amusing ceiling of bras, lots of memorabilia left by visitors, and a typically hearty pub menu which specialises in a barbecue of beef and barramundi.

Daly Waters is located 589 km south-east of Darwin and 916 km north of Alice Springs on the Stuart Highway. It is 212 metres above sea level.

John McDouall Stuart, the first European to pass through the area, named the springs which sustained the early settlement after the new Governor of South Australia, Sir Dominick Daly in 1862.

The Daly Waters Hotel
By 1893 there was a hotel, the Daly Waters Hotel, in the town. The modern pub was built in 1930 but there are sections which make it one of the oldest buildings in the Northern Territory. The combination of the springs, with reliable water, and the constant movement of cattle through the area (cattle were taken from Queensland across to the country to the north and west by drovers), produced a regular clientele which, today, has changed to backpackers, coach tours and grey nomads. The modern pub  is the tiny town's most prominent tourist attraction. Every night there is a beef'n'barri (ie. barramundi) barbecue as well as the usual pub fare of schnitzels, salads and steaks. Since the 1980s women have been leaving their bras dangling from the ceiling. As the pub website explains: "People often ask how it all started, people leaving behind their mark, as far as we can tell it all started in the 80's. A bet between a coach driver and his passengers (female) that they couldn't drink x numbers of beers otherwise had to leave their bra behind and still they do. Some take them off at the bar others are a little more discreet. Many males stare with mouths open wide in wonderment at the huge assortment of cup sizes. A couple of pairs have been likened to hammocks. All the memorabilia is washed regular (sic) because the pub has no windows just screens. But don't be fooled we have very good video surveillance and some hilarious footage as a result." People just feel they need to leave a part of themselves here." Check out http://www.dalywaterspub.com for more information.

Daly Waters Airstrip and Hangar
The Daly Waters Airstrip was constructed around 1930 to service the Daly Waters Airmail run. It grew rapidly and at a time when there was no such thing as genuinely long distance flights it became a major staging point for interstate and international airlines heading to and from Darwin. It became an RAAF station on 18 March 1942 when No: 56 Operational Base Unit, No: 1 Medical Receiving Station and No: 1 Repair and Salvage Unit formed. No: 56 Operational Base Unit moved out in the latter half of 1943 and No: 9 Stores Depot was the last to leave on 6 October 1944. Today the World War II hanger still stands beside the runway.

The Stuart Tree
On the way from the Stuart Highway into the town of Daly Waters is the the Stuart Tree. There's little doubt that it is dead. However there is a plaque which reads: "The explorer John McDouall Stuart is presumed to have carved the initial S on this tree on 23 May 1862 during his successful journey from Adelaide to Darwin 1861-62. Erected by the Northern Territory Forces in 1944." Today you have to look very carefully and you can see a vague "S" on the eastern side of the tree.

* Prior to the arrival of Europeans the area had been inhabited by the Yangman Aborigines for over 40,000 years.

* The tiny settlement was named by John McDouall Stuart during his epic attempt to cross Australia from south to north in 1861-2.

* Stuart had already made two attempts to cross the continent. His first, in 1860, had reached Tennant Creek. The second, in early 1861, pushed further north but again Stuart was forced back. The third journey, which headed out from Adelaide in October 1861 reached the centre in March, 1862. Stuart finally arrived at Daly Waters on 23 May having forced his way through difficult lacewood scrub at a rate of a little more a kilometre a day. He reached the northern coast near modern day Darwin on 24 July, 1862.

* By early 1872 a pony express was carrying messages from Tennant Creek (where the Overland Telegraph was being built) to Daly Waters and beyond.

* In the 1870s the settlement was so isolated that twice each year the telegraphists would ride across to Roper Bar on the Gulf of Carpentaria, a journey of nearly 400 km, to meet the boat Gulnare which carried stores and ammunition.

* The current Daly Waters pub was built in 1930 by Bill and Henrietta Pierce.

There is no Visitor Centre at Daly Waters but the pub will help with any enquiries. Daly Waters Pub, Stuart Street, tel: (08) 8975 9927

There is no dedicated website but the pub's website offers a lot of useful information. Check out http://www.dalywaterspub.com. 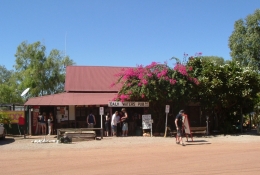 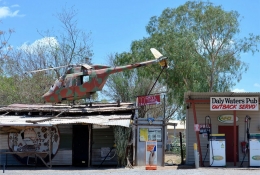 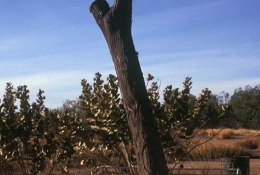 What remains of the Stuart Tree where John McDouall Stuart carved an S in 1862.