Villages, huge gardens, parks and chic accommodation to the east of Melbourne

The official website divides the Dandenongs, a charming area which lies to the east of Melbourne and is characterised by the Dandenong Ranges, into the Foothills, Hilltop Villages, Growers and Farmgates, Puffing Billy Country and the Southern Dandenong Ranges. The area includes the towns and villages of Belgrave, Cockatoo, Dandenong, Emerald, Gembrook, Kallista, Kalorama, Lilydale, Menzies Creek, Monbulk, Montrose, Mount Dandenong, Mount Evelyn, Olinda, Packenham Sassafras, Selby, Sherbrooke, Silvan, Tecoma, The Basin and Upper Ferntree Gully. The Dandenongs, or the Dandenong Ranges, are a collection of small towns and villages characterised by houses nestled into the surrounding forests and some of the finest gardens in Australia. The area is cool enough to be a wonderland in both the spring (when the gardens are at their best) and autumn when the deciduous trees are spectacular. Aussie Towns has attempted to deal with the towns individually and hence there are separate entries on Belgrave, Dandenong, Emerald, Monbulk, Kallista, Kalorama, Monbulk, Olinda, Sherbrooke and Upper Ferntree Gully.

The Dandenongs are located directly east of the Melbourne CBD. Mount Dandenong is 49 km from the centre of the city.

Dandenong Ranges National Park
Dandenong Ranges National Park (3,540 ha) was declared in 1987 when the Ferntree Gully National Park, Sherbrooke Forest and Doongalla Estate were amalgamated. A decade later the Olinda State Forest, Mount Evelyn and Montrose Reserve were added. The park, which stretches from Kalorama in the north to Belgrave in the south is primarily a place for walking, sightseeing, picnicking, nature observation and car touring. More than 400 plant species have been recorded in the park, including the rare cinnamon wattle and smooth tea-tree, 130 bird species, 31 species of mammals (most are nocturnal), 21 reptile species and nine amphibians.
Parks Victoria has divided the park into four distinct areas:
* Olinda Area
* Doongalla Area
* Ferntree Gully Area
* Sherbrooke Area

Each has its own attractions and they can best be explored by:
(a) check out https://parkweb.vic.gov.au/explore/parks/dandenong-ranges-national-park and downloading the specific Visitor Guides for each section.
(b) checking out Aussie Towns specific entries on Belgrave, Dandenong, Emerald, Upper Ferntree Gully, Kallista, Kalorama, Monbulk, Olinda and Sherbrooke.
(c) there is a useful, downloadable map of the Ferntree Gully area - check https://parkweb.vic.gov.au/__data/assets/pdf_file/0011/695873/DRNP-map-FernTreeGully.pdf.

* Prior to European settlement the area was home to the Woiwurrung Aboriginal people. The Wurrundjeri people also once passed their winters near the Dandenong Ranges.

* The first European in the Dandenongs was botanist Daniel Bunce in 1839. Guided by a party of Aboriginal people he climbed Mount Corhanwarrabul (628 m) and Mount Dandenong (633 m) - the two highest peaks in the ranges.

* Ferdinand von Mueller, the botanist responsible for the Melbourne Botanic Gardens, explored the area in the 1850s.

* The first European settlers in the Olinda area were the Holden family who camped on the slopes from 1855 and felled mountain ash until the turn of the century.

* From 1867 the local forests were logged by timbergetters, so much so that the timber was exhausted by around 1910.

* The first land in the Dandenongs was reserved for recreational purposes in 1882 at Ferntree Gully.

* By the 1880s the area was a popular holiday destination for nature lovers and bushwalkers.

* A road to the summit of Mt Dandenong was made suitable for coaches in 1904.

* By 1907 much of the land was released for agriculture and settlement.

* In 1913-1914 the poet C.J. Dennis camped at Kallista in an old tram and wrote much of The Songs of a Sentimental Bloke.

* Large boarding houses were built for holidaymakers in the 1920s.

* Famous crime novelist Arthur Upfield stayed at a lodge on Mount Dandenong in 1938 and used the area as the setting for two of his detective novels, The Devil's Step (1946) and An Author Bites the Dust (1948).

* Sherbrooke Forest was declared in 1958.

* The Cardinia Reservoir was opened in 1972.

* Serious bushfires raced through the area on 16 February, 1983.

* In 1987 the reserves in the area were amalgamated as the Dandenong Ranges National Park.

* In 1995 the gardens in the area were taken over and administered by Parks Victoria.

There is an official website. Check out https://visitdandenongranges.com.au for information about the villages and gardens in the area. 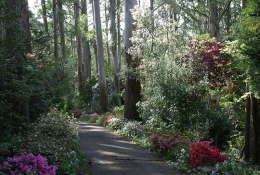 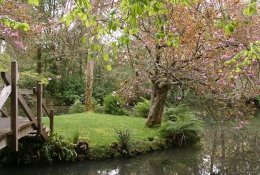 Spring blossoms beside the lake in the Alfred Nicholas Memorial Garden 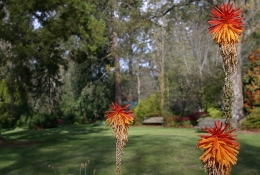 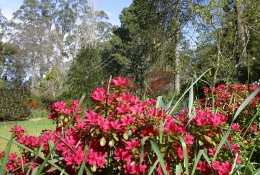 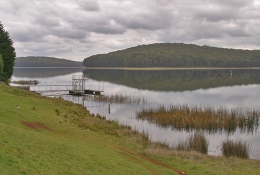 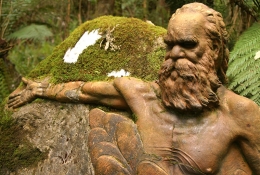 A sculpture in the William Ricketts Sanctuary near Olinda