Small, historic town on the banks of the Murrumbidgee River.

Darlington Point is a quiet rural service centre on the banks of the Murrumbidgee River. It is noted for its riverside beaches which are popular holiday destinations with camping, picnicking, fishing and swimming. The town is surrounded by a red river gum forest which is home to numerous birds and animals. The major attraction in the area is the remarkable Altina Wildlife Park where animals roam on a 207 hectare park.

Darlington Point is located on the Murrumbidgee River 613 km west of Sydney via the Hume and Sturt Highways, 34 km south of Griffith and 430 km north of Melbourne.

The town takes its name from a 56 acre property acquired by George Rogers in 1864. He named the property Darlington and built an inn near the main road from Wagga to Hay. It was only a small step for the name to be changed to Darlington Point.

Exploring around the town
There are remnants of the town's early history if you look carefully. The public wharf, which was established for a ferry across the Murrumbidgee, is now only evident by its ruins near the town beach; the lift bridge dates from 1905 and can be seen at the entrance to the Darlington Point Caravan Park; and the local Catholic Church, dedicated to Saint Oliver Plunkett, dates from 1925.

Goanna Walking Track
A pleasant 1.8 km (one way) walk on the south side of the Murrumbidgee River. The walk starts at the Fig Tree Park and meanders beside the river through red river gum and black box forests. There is signage dealing with local flora, fauna and history along the way. Always beware of the red river gums which have a tendency to drop large limbs.

* Prior to the arrival of Europeans the area had been occupied by people from the Wiradjuri Aboriginal people for at least 20,000 years.

* A settlement developed in the 1830s around a ford which provided a crossing across the Murrumbidgee when the river was low.

* The first settler took up land in 1844. His name was John Peter. He named his property 'Cooba' after the Wiradjuri word 'coob' for a local tree.

* In the early 1850s Surveyor Townshend reserved land for a future township.

* By 1853 river steamers were travelling up and down the Murrumbidgee. Darlington became a station supplying wood for the steamers.

* In 1864 George Rogers acquired 56 acres of the 'Cooba' station and named his area 'Darlington'. He established an inn beside the Wagga-Hay Road.

* In 1866 Edward Grimley, the new owner of the Darlington Inn, bought a punt which could carry 1700 sheep.

* In 1867 the bushranger 'Blue Cap' (Robert Cotterell) and his gang got drunk in the Darlington Inn and terrorised an old shepherd they suspected of stealing some of their ill-gotton gains.

* A wool store was built beside the river in 1876 and a small wharf went up alongside.

* A pontoon bridge was built across the Murrumbidgee in 1880.

* The Warangesda Aboriginal Mission was established 4 km from town in 1880 by pastor John Gribble who was appalled at the living conditions of the Aboriginal peoples and the  indifference of local whites.

* In 1881 a public ferry was established across the river. That year also saw the arrival of the railway.

* By 1883 the town had a post office, courthouse, police barracks, school and telegraph service.

* The town's first church, a Presbyterian church, was consecrated in 1893.

* A lift bridge was constructed across the Murrumbidgee in 1905.

* In 1925 the Catholic Church, dedicated to Saint Oliver Plunkett, was consecrated.

* The current concrete bridge across the river was constructed in 1979.

The Darlington Point Riverside Caravan Park has useful information on the town and district. Check out https://www.darlingtonpointcaravanpark.com.au. 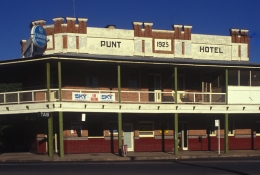 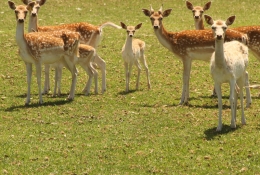 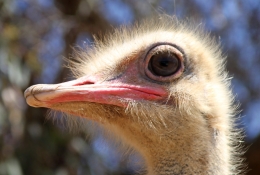 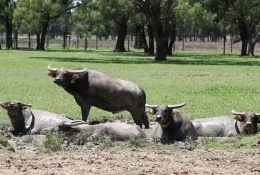 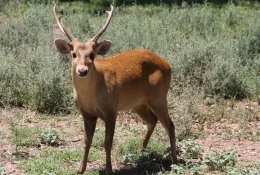 An eland gazes from the enclosure at Altina 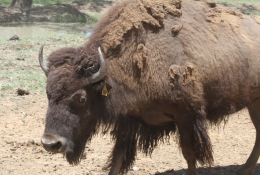 Up close and personal with an American Bison.