Daydream Island, in 2016-2017, is an island in transition. It is still operating as a family, wedding and conference destination but, as it is now owned by CCIG – China Capital Investment Group - a major conglomerate with headquarters in Shanghai, it is awaiting a major makeover. It is still a popular and easily accessible Whitsunday resort destination with lots of free activities, a range of bars, restaurants and cafes and enough activities to keep holidaymakers busy ... if they want to be kept busy. Otherwise the beaches and spacious lawns, the swimming pools and the relaxing accommodation are designed for a peaceful and relaxing holiday.

Daydream Island is located only 15 minutes by regular ferry from the Airlie Maritime Terminal.

The island was originally known as West Molle. The name was changed, for commercial reasons, by retired army major Lee 'Paddy' Murray when he built a resort on the island around 1933. It was named after the Murray's yacht, Day Dream.

1. The Island Itself
Description of the island
This small island is close to the mainland and only fifteen minutes away from the Airlie Maritime Terminal at Airlie Beach. Both the beaches and the bushwalks on the island are quite short.

How do visitors access it?
There is a regular ferry service from Airlie Maritime Terminal to Daydream Island and beyond to Hamilton Island. This means that visitors can fly directly to Hamilton Island or to Whitsunday airport at Proserpine and connect with the ferry. The crossing from Airlie Beach takes only 15 minutes.

History of the Island
Geologically the Whitsunday Islands are drowned mountains. Prior to the last Ice Age they were connected to the mainland. The melting of the polar caps drowned the valleys between the mountains creating a network of 74 islands of which only three now have resort facilities. Beyond Daydream Island the area is part of the Great Barrier Reef Marine Park and the uninhabited islands are all controlled by National Parks and Wildlife.
The first European to explore the area was Captain James Cook who travelled through the area on his journey up the eastern coast of Australia in 1770. He passed through Whitsunday passage, a narrow channel which lies between the mainland coast, South Molle and Daydream Islands to the west and Dent, Whitsunday, Hook and Hayman Islands to the east, on Sunday 4 June which happened to be Whit Sunday (the seventh Sunday after Easter). Other islands were occupied by farmers in the 1920s and 1930s. It wasn't until Paddy Murray and his wife, Connie, arrived that people settled on West Molle, now known as Daydream Island.

2. Resorts on the Island
History of the Resort
Daydream Island was originally known as West Molle Island. In 1932 it was purchased for £200 by retired army major Paddy Murray and his wife, Connie. They renamed it Day Dream after their yacht. They built six tin sheds and called it a resort. In 1941 they sold their modest resort and the island for £2,000. In 1947 the island was purchased by Sir Reginald Ansett. He closed the resort in 1953, dismantled the buildings and moved the equipment to Hayman Island. Daydream was closed until 1967 when it was sold to a Gold Coast entrepreneur who re-established the resort.
It was purchased by the Williams Corporation in November 1999 and sold on to Vaughan Bullivant in the early 2000s. In 2015 it was acquired by CCIG – China Capital Investment Group - a major conglomerate with headquarters in Shanghai who plan to invest and and upgrade the resort. There is only one resort on the island.

Who does it appeal to?
Daydream Island is primarily a family destination. It also is a suitable destination for conferences, meetings and weddings.

The Living Reef
Beside the Atrium is a true tropical rarity: the Living Reef. The free form coral lagoons at the resort are home to more than 140 species of marine fish, 82 species of coral and a range of invertebrate species. There is a lemon shark, clown fish, stingrays and living coral. A team of marine biologists living on the island care for the animals around the clock, and at regular times through the day they feed baby stingrays and give talks about the biological processes of the Great Barrier Reef.

Eating in the resort
The island has six restaurant/cafe/eateries and three bars. There is Mermaids (the resort's main upmarket restaurant); Waterfalls (a family buffet in the main atrium); The Fish Bowl (a bistro pub with an a la carte menu, drinks and games); the Boat House Bakery (sandwiches, wraps, bread, pies and pastries); Coffee Bean Cafe (coffee and cakes) and Call and Collect (you order and collect from the Atrium). 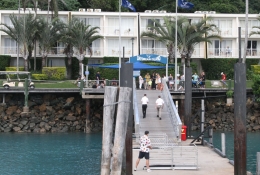 The jetty in front of the resort - waiting for the ferry from the mainland. 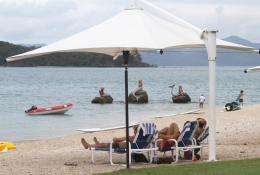 The beach at the front of the resort with the three mermaids. 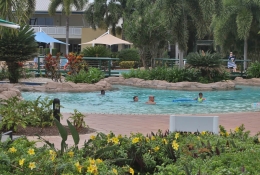 Relaxing in one of the resort's pools. 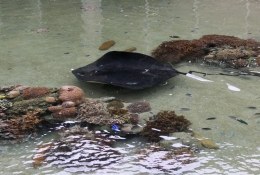 A stingray and tropical fish in the Living Reef. 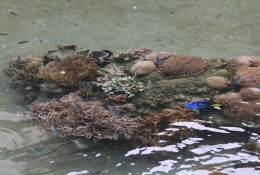 Living coral and tropical fish in the Living Reef beside the Atrium. 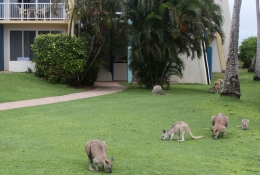 Wallabies on the lawn in front of the resort.