Deddington is located 40 km south east of Launceston via the Midland Highway and the C416 through Evandale.

It has long been accepted that Deddington was named after a village in Oxfordshire by the artist John Glover who was one of the earliest European settlers in the area. However the Tasmanian Nomenclature Board has discovered that this was probably folklore (or a conveniently inaccurate "truth" - Glover was living in the area at the time) because "the Parish of Deddington was named c1835 in Surveyor General George Frankland's time. The parish names appeared on a list in 1835 and no one really knows who selected the names or why the names were chosen. It is almost certainly named after the town in Oxfordshire or perhaps to honour the Count of Deddington or some other VIP."

Deddington Chapel sometimes known as Nile Chapel
Deddington Chapel is a simple rectangular building. It was almost certainly designed by the artist John Glover.
In 1967 the Historical Committee of the National Trust produced a brochure which described Deddington Chapel: "At Deddington, a small English-like hamlet, about 24 miles south-east of Launceston, along the Nile River, can be found an Inn, a Post Office, a small hall, a few cottages, the remains of an old gaol, and a Chapel. This Chapel was built one hundred and twenty five years ago and is closely associated with John Glover, the most prominent and important artist ever to settle in Van Diemen's Land. He lived at nearby Patterdale and worshipped in this small chapel. He, with his wife Sarah, are buried by the western wall.
"The Chapel was opened for worship by November 1842. It was built on land given by Robert Pitcairn, the owner of Nile Farm. The building, of the simplest design, set amongst the native trees is said to have been designed by John Glover..."
There is some debate about the opening date with other sources suggesting 10 May, 1841. It was paid for by subscription with those who paid 30 shillings a year being provided with a pew and those who paid five shillings being given a seat.
The brochure goes on to list the settlers who helped build the tiny church and then explains the stipulation that 'the land and burial ground was solely for the use of Protestants' and that Presbyterians had full use of the chapel until they failed to carry out services. This tradition lasted until the turn of the century when the village became so reduced in size that services stopped and the church fell into disrepair. It was finally restored by the National Trust in 1967 and celebrated its 150th anniversary in good condition. For more information check out http://www.deddington.org.uk/tasmania/nilechapel

In Alan McCulloch's Encyclopaedia of Australian Art the entry on Glover notes: 'He was a skilful and prolific painter of landscapes with a reputation extending to France, where he attracted the interest of Louis XVIII. The French king bought Glover's pictures, presented him with a gold medal, and was said to have aroused his interest in migrating to Australia. A man of considerable wealth, Glover embarked from Gravesend on 20 Sept. 1830, arriving Launceston, 18 Feb. 1831, Hobart, 1 Apr. 1831. In Mar. 1832 he set off by wagon for Mills Plains to occupy his holding - a government grant of 2,560 acres. He bought an additional 5,098 acres, built a large house, Patterdale, a church at the nearby village of Deddington and lived a happily family life as a country squire and successful painter ... in Tas. he discovered a new landscape, light, foliage and atmosphere and responded to the raw and primitive features of the new country perceptively enough to attain new individuality and distinction. The rusticity of his new work became its greatest strength. The rusticity of his new work became a great strength."
Glover's house, 'Patterdale' (which he named after a place in the English Lakes District) is located 4 km east of Deddington. It is an elegant two-storey Georgian residence built in 1832 with a first floor of rubble stone and a timber second floor.

* Prior to European settlement the Tyerrnotepanner people inhabited the area around Deddington.

* The first European, Thomas Pitcairn, received 640 acres and settled in the area in  1826.

* In 1829 Robert Pitcairn gifted some land for the building of a chapel.

* In 1832 the artist John Glover settled in the area. That same year he built Patterdale, the family home.

* In 1842 the Deddington Chapel was opened for worship which was restricted to Protestants and Presbyterians.

There is no accommodation in Deddington.

There are no cafes or restaurants in Deddington.

There is a short, useful history of the chapel at http://www.evandaletasmania.com/the-deddington-chapel.html and a general site http://www.deddington.org.uk/tasmania/today offers detailed information. 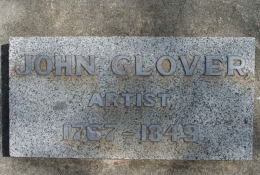 The grave of John Glover at Deddington 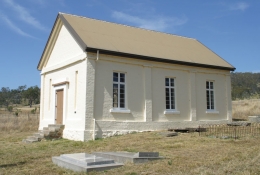 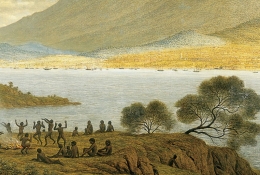