Important Riverina service centre surrounded by rivers, lagoons and irrigation channels - known as the Ute Capital of the World.

Deniliquin is an important rural service town located on the Edward River, an anabranch of the Murray River. The town is particularly attractive as it is built around the river and a series of lagoons which are surrounded by both parkland and state forest. Consequently the town's main attractions, apart from its famous Ute Festival, are water based and include an island wildlife sanctuary, fishing, water skiing, canoeing, boating and safe swimming at both the sandy McLean Beach and Willoughby's Beach which lie within the nearby state forest. Deniliquin is in the heart of an irrigation area which covers 725,000 hectares. The district produces rice, wool, beef, dairy products, wheat, barley, fat lambs, vegetables, fruit and timber.

Deniliquin is located 719 km south-west Sydney via Wagga and Jerilderie; 291 km north of Melbourne via Echuca; and 697 km east of Adelaide. It is only 91 metres above sea level.

It is claimed that Benjamin Boyd, who established the head station the district in 1842, named his property Deniliquin, a corruption of Denilakoon, who was a local tribal elder known for his wresting ability which came with his impressive size and strength.

The Peppin Heritage Centre
The Peppin Heritage Centre is located in George Street, incorporates the town's Visitor Information Centre, and is open from 9.00 am - 4.00 pm daily. The Museum includes permanent exhibitions on
* the Peppin Merino Story - George Hall Peppin and his two sons were experienced English sheep breeders who settled at nearby Wanganella station in 1858. Dissatisfied with the quality of wool from the merino, they channelled their efforts into developing a new breed that was better adapted to Australian conditions, larger of frame and able to yield a greatly improved quality and quantity of wool. Their successes constitute the foundation of Australia's reputation as a quality wool exporter. Peppin sheep now predominate among the flocks of South Africa, New Zealand and South America and 60-85% of Australian merinos have Wanganella blood.
* Lawson Syphon - the Lawson's Syphon, which lies 7 km east of Deniliquin, is an impressive engineering complex that diverts 10,000 megalitres a day from Mulwala Canal into a series of canals which irrigate the area. The syphon can be visited and there is detailed information about the syphons at http://www.denitourism.com.au/local-info/lawson-syphon.
* 'Struggle for Water' - an exhibit which details the difficulties encountered by early settlers in their search for water.
* Squatters, Surveyors & Selectors – Settlements along the Edward River which covers the history of the stations on both sides of the river.
* Wanganella Goal and the Headless Horseman - a one room weather board building that served as a lock up and now houses a display about Deniliquin Goal and the Headless Horseman story. A sound and light show.
* Warriston Ram Shed - a reconstruction of a typical ram shed that was used in the area from the 1860s to the 1920s.
* Mosaic TransmUTE - a community project started in 2005 by South West Arts in conjunction with the Ute Muster. It has transformed an old EH Holden Ute into a mosaic sculpture which depicts some scenes reminiscent of the Deniliquin area.

Historical Town Walk
The Visitor Information Centre has a pamphlet outlining an historical town walk. The highlights include:

The Court House
Located on the corner of Wellington and Poictiers Street, the Deniliquin Court House is probably the town's most impressive heritage building with its stuccoed Victorian Classical facade. Built 1883-87 it was designed by James Barnet. Additions were made in the 1890s that appear to have been part of Barnet's original conception. The entrance and portico are particularly impressive.

Town Hall and Cressy Street
Located in Cressy Street are the town hall, the council building, the former Globe Hotel, and Pastoral Times newspaper building - they represent a group of largely intact and gracious late Victorian buildings. The Town Hall was built in 1876 and is Italianate in style. The clock on the Town Hall tower was donated in 1904 by a resident, Captain Landale, to commemorate Queen Victoria's long reign.

Waring Gardens
Located in Cressy Street, Waring Gardens are built around a chain of lagoons which were once part of the Edward River. The park was established in 1881 and named after Deniliquin's first town clerk. A bridge was built and a band rotunda added in 1887. Numerous Moreton Bay figs, palms, willows and other trees date from the 19th century. The Three Muses in the corner of the gardens represent Literature, Science and Art and originally were part of the local School of Arts building.

Island Sanctuary
Located opposite the Town Hall, the island sanctuary is a section of natural bushland formed by the Edward River where, in 4 hectares, there are kangaroos, possums, bats, and over 100 varieties of birds in a natural river red gum forest. It contains the burial site of 'Old Jack', a member of the Melville gang, bushrangers who visited Deniliquin in 1851. Apparently Old Jack was so drunk that his compatriots tied him to a tree and threw turpentine over him, thinking it to be water. As his hollering increased one gang member approached him with a candle and Jack burst into flames. Once untied he threw himself in the river but died two days later.

Beaches and River Walks
The Island Sanctuary is a good place to start the riverside walk to McLean's Beach. The Murray Valley National and Regional Parks brochure explains "Experience the natural beauty of Deniliquin’s River Red Gum forests with the ‘Beach to Beach’ walk. Hugging the banks of the Edward River, the track takes you from Willoughby’s Beach to McLean’s Beach, right past the centre of town. You can even stop off at a local café before returning to the trail and completing this scenic tour. At Willoughby’s Beach you can cycle or hike along the many forest tracks before setting up camp alongside the Edward River. This is the ideal location for a swim or a spot of fishing." It can be downloaded. Check out http://deniliquinvisitorscentre.designexperts.com.au/pdf/MurrayValley_MapA3_LowRes.pdf

Blake Botanic Reserve
Off Harfleur Street are some beautiful landscaped gardens, with natural lagoons, picnic facilities, ducks, peacocks and a Moreton Bay fig growing out of the trunk of a large gum. This is a botanic garden specialising in local native flora.

Ute on a Pole
A variation on Australia's love of the "Big Thing" is the "Thing on a Pole". In this case a Holden WB, built in 2001, located beside the National Bridge and near the Edward River, it is the town demonstrating its claim to be the Ute Capital of the World.

Deniliquin Ute Muster & Play on the Plains Festival
It started in 1999 when owners of utes (utility vehicles) were invited to come to Deniliquin to attempt a very amusing Guinness Book of Records title for the "Largest parade of legally registered utes in the world". They achieved the record when 2,839 utes paraded. By 2010 the event had become so popular with ute owners that a staggering 10,152 utes turned up. It is essentially a working class, rural festival to celebrate the reliability of a utility as a workhorse and to gently snub the more expensive, more overtly upmarket and more middle class, Land Rover and Toyota 4WDs. Symbolic of these working class roots is the parallel Blue Singlet Count which reached 3,500 - another Guinness record. The weekend activities - it is always held on the Labour Day Weekend - include live music (always Australian and predominantly country music), driving events, bull riding and there is camping on a wonderfully flat stretch of the Riverina Plain. The Festival headquarters are open all year round in Hardinge Street, tel: (03) 5881 3388 or check out http://www.deniutemuster.com.au.

Steven's Weir
Located 26 km north-west of Deniliquin via the Wakool Road are riverside gardens and picnic facilities at Steven's Weir. It was constructed in the 1930s to supply water to the Wakool Irrigation district.

* Prior to the arrival of Europeans the area was inhabited by the Wamba Wamba and Perrepa Perrepa Aborigines.

* In 1842 Benjamin Boyd established the head station of a run known as 'Deniliquin' 6 km upstream from the present township.

* By the early 1840s the reports of pastoralist Augustus Morris, who had followed the Edward River to its junction with the Wakool River, had started a land grab in the area.

* The settlement's first inn opened in 1845 or 1847 on the ground now occupied by the North Deniliquin School.

* In 1847 a punt was established by a Dr Coward, the first resident on the south side of the river.

* Deniliquin was officially gazetted in 1850. That same year a two-roomed slab hut was built for Henry Wyse, who used it as a store and post office. Wyse's store was positioned at an important river crossing for stock. It was strategically located at the convergence of major stock routes from Queensland and New South Wales through to Victoria.

* The town's first gaol was built in 1856. It resulted from concerns about Henry Wyse's tendency to chain law-breakers to a log in his cow yard.

* The two hospitals amalgamated in 1861.

* The first bridge across the Edward River was opened in 1861. It was replaced by a toll bridge and then by another span in 1896.

* The first municipal election was held in 1869.

* In 1876 a private railway from Echuca reached the town. That year the town hall was built.

* New school buildings were erected in 1879. The old 1862 schoolhouse was turned into a teacher's residence.

* In 1939 the Berriquin Irrigation District was established.

* During World War II Deniliquin was home to the No.7 Service Flying Training School.

* In 1999 the first Deni Ute Muster attracted 2,839 utes the "Largest parade of legally registered utes in the world".

* In 2013 the first Deni Blues and Roots Festival was held.

The town's official website has useful information about accommodation and eating in the area. Check out http://www.denitourism.com.au. 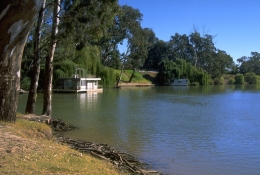 The banks of the Edward River at Deniliquin. 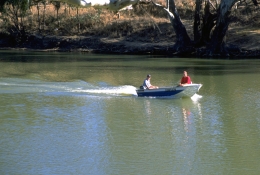 Boating on the Edward River at Deniliquin. 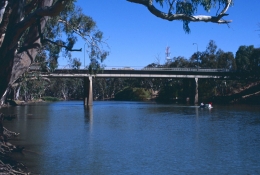 The bridge over the Edward River at Deniliquin. 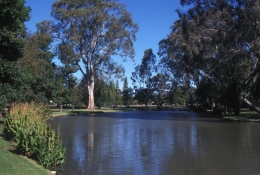 The lagoon in Waring Gardens. 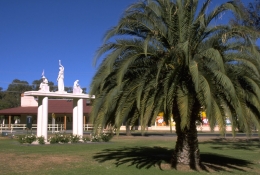 The Three Muses in Waring Gardens at the corner of Cressy and Edwardes Streets. 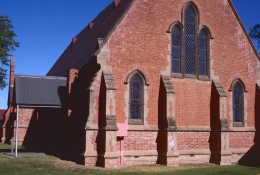 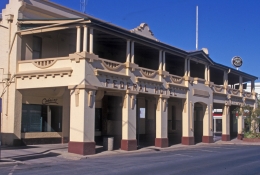 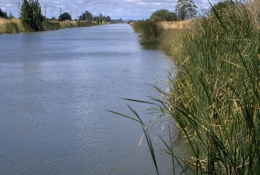 The Mulawa Canal near Deniliquin.