Dirk Hartog Island is 80 km long, 14 km wide at the widest point, and covers an area of 63,000 hectares. It is now a combination of an eco-tourism destination and a National Park. Today the island's eco tourism resort is run by Kieran Wardle and his wife, Tory. Apart from offering trips to Cape Inscription where Dirk Hartog first stepped onto Australian soil (it is a day trip over narrow sandy tracks) they offer a range of eco-friendly accommodation options and a variety of trips, fishing options and opportunities to walk around the island.
The island is barren, isolated, pummelled by the huge and unpredictable waves of the Indian Ocean. Physically it has unusual geological formations ranging from 15 metre high sand dunes to rocky cliffs and fossilised remnants of ancient coral reefs. It is home to a number of endangered species including the rare black and white wren; each summer loggerhead turtles nest on the north end of the island (it is the largest loggerhead turtle breeding colony in Australia); and it is home to the sandhill frog which is only found in Shark Bay. Just near the Eco Lodge is an island bird sanctuary inhabited by terns, cormorants, osprey and seagulls where you can watch as huge white breasted sea eagles go about their dangerously predatory business of stealing chicks.

Dirk Hartog Island is located 835 km north of Perth via Geraldton and accessible via Carrarang or plane/boat from Denham.

Dirk Hartog Island was named after the Dutch sailor who landed at Cape Inscription on 26 October 1616. Hartog left a pewter plate inscribed (in Dutch): '1616. On 25th October there arrived here the ship Eendraght of Amsterdam. Supercargo Gilles Miebais of Liege; skipper Dirck Hatichs of Amsterdam. On 27th do. she set sail again for Bantam. Subcargo Jan Stins; upper steersman Pieter Doores of Bil. In the year 1616.' So it probably should be called Dirck Hatichs Island.

Cape Inscription, the Famous Post and Dirk Hartog's Plate
At Cape Inscription there is an old post where the original Dirk Hartog plate was placed as well as a lighthouse and a lighthouse keeper's cottage. The western coastline of the island is dramatic and dangerous in stormy weather but during mild conditions it is famous for its game fishing with marlin, samson fish and sailfish being caught.
At Cape Inscription on 26 October 1616, Dirk Hartog landed and left his famous pewter plate inscribed (in Dutch): "1616. On 25th October there arrived here the ship Eendraght of Amsterdam. Supercargo Gilles Miebais of Liege; skipper Dirck Hatichs of Amsterdam. On 27th do. she set sail again for Bantam. Subcargo Jan Stins; upper steersman Pieter Doores of Bil. In the year 1616."
In 1697 the Dutch sailor Willem de Vlamingh reached the island and, finding Hartog's pewter plate still in its original position he removed it and replaced it with another plate. The original was returned to Holland where it still is kept in the Rijksmuseum.
De Vlamingh's replacement plate listed all the important sailors on the voyage and concluded with "Our fleet set sail from here to continue exploring the Southern Land, on the way to Batavia."
In 1818 the French explorer Louis de Freycinet, while exploring the coast, came across de Vlamingh's plate and removed it to France. The plate was eventually returned to Australia in 1947 and is currently housed in the Maritime Museum in Fremantle.

The Changing Nature of Ownership
On 15 January 2001 the Western Australian government announced: "The State Government has reached agreement for Dirk Hartog Island in the World Heritage Listed Shark Bay region to become a national park. In a joint announcement, Planning Minister Graham Kierath and Environment Minister Cheryl Edwardes said the long-term owners of the island had agreed to its transfer to the Conservation Commission.
The Wardle family has held a pastoral lease over the island for more than 25 years and also holds freehold title over about 100 ha of the island.
Now an agreement has been reached and a management plan for the future conservation of the island is being drawn up in consultation with the Wardle family.
This will involve removing livestock, future tourism leases and island management and involve consultation with the region's Aboriginal people in line with the Native Title Act.
Mr Kierath said negotiations had involved buying out the lease and reducing the family's overall freehold ownership through a process of consolidating areas by offering other land parcels in exchange.
"It is a tremendous opportunity for the State to secure an important historical and environmental area and ensure its protection for future generations," he said.
Mrs Edwardes said making the island a national park would help preserve an important part of the State's natural assets.
"The island has major conservation values, especially as a nesting ground for marine turtles," she said. "It provides an outstanding opportunity to re-establish the original native fauna following de-stock and the removal of feral goats and subject to the successful eradication of feral cats.
"This will add to the success of the Department of Conservation and Land Management's Project Eden wildlife recovery initiative that already has restored several species of native animals into the Shark Bay area."
Mr Kierath said the inclusion of the 61,500 ha island in the formal conservation reserve system would also help recognise the important historical aspects of the island.
"Dirk Hartog Island is the first known point of contact Europeans had with Australia which gives it national cultural and heritage value," he said. "Awarding the island the protection of a national park will only help reaffirm the importance of the area to Western Australians in particular."
The island is named after the Dutch explorer who recorded his landing on the island on October 25, 1616. In 1697, Willem de Vlamingh landed on the island and discovered the pewter plate Hartog had nailed to a post. Around 100 years later several French explorers visited the island. Evidence of French exploration was uncovered recently when an archaeological expedition found two 18th century French coins.

Dirk Hartog Island Brochure
There is a detailed brochure about the island which can be downloaded at https://parks.dpaw.wa.gov.au/sites/default/files/downloads/parks/20140592%20Dirk%20Hartog%20Island%20Brochure_FINAL_WEB.pdf. It provides details of camping sites and fishing on the island.

* Prior to the arrival of Europeans, Dirk Hartog Island was part of Malgana country and is known as Wirruwana’. There is evidence of past Aboriginal occupation of Wirruwana and Malgana Aboriginal people who still regularly visit and fish the waters around the island.

* In 1610 the Dutch sailor Henderik Brouwer discovered a fast route from the Cape of Good Hope to Batavia was via the Roaring Forties. The idea was head east for a few thousand kilometres then turn left.

* The route became popular and in 1616 Dirk Hartog followed the route, sailed too far, and landed at Cape Inscription on 26 October 1616.

* In 1697 the Dutch sailor Willem de Vlamingh reached the island and, finding Hartog's pewter plate, removed it and replaced it with another plate. The original was returned to Holland where it still is kept in the Rijksmuseum.

* In 1699 William Dampier surveyed the northern coast of the island.

* In 1772 Alesne de St Allouren landed on the island, buried a parchment and two coins, and claimed the island for the French king.

* In 1818 the French explorer Louis de Freycinet, while exploring the coast, came across de Vlamingh's plate and removed it to France. The plate was eventually returned to Australia in 1947 and is currently housed in the Maritime Museum in Fremantle.

*  In 1821-22 the explorer Phillip Parker King circumnavigated the island on his historic survey of the Australian coastline. King left his mark on the island when he spelt out his name in nails on a post.

* In 1821 the explorer John Septimus Roe surveyed the island and carved his name into a post.

* In 1858 Henry Mangles Denham surveyed the area and produced charts of the waters.

* In 1869 the Western Australian government granted a pastoral lease on the island. A homestead was built complete with a shearing shed and shearing quarters.  At various times the island was capable of sustaining herds of up to 25,000 sheep.

* In 1969 the island was purchased by Sir Thomas Wardle, an ex-Lord Mayor and one-time grocery millionaire from Perth.

* In 1989 the West Australian government decided to make all of the island (except for 97 hectares) part of the hugely expanded Shark Bay National Park which includes all the important sites in Shark Bay.

* In 1993 Kieran Wardle, grandson of Sir Thomas Wardle, took over the island and began developing it for tourism.

* In 1998 the parchment and two French coins left by Alesne de St Allouran were found on the island.

* From 1993 the island became a popular destination for dedicated anglers. It was featured on Rex Hunt's television fishing shows. At that time only eight vehicles are allowed on the island at any one time. The maximum number of visitors was 30-35 and it was closed between November and 1 March. 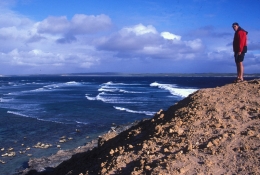 Kieran Wardle standing on the southern cliffs of the island 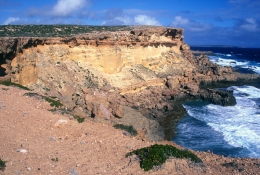 Rugged cliffs on the island with the mainland on the horizon 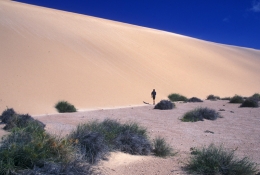 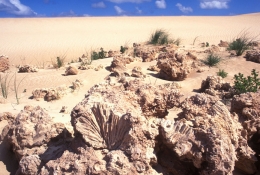 Fossils abound in the rocks on the island 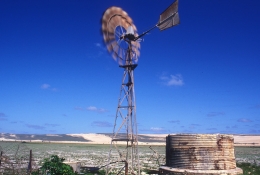 Once 6,000 sheep grazed on the island. There are still farming remnants from that time. 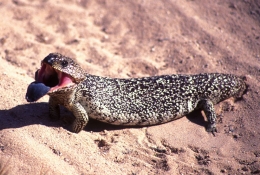 Wildlife abounds on the island