Rural service centre on the banks of the Richardson River

Donald, which lies on the banks of the Richardson River, is essentially a service centre to the surrounding district where wheat, barley, fat lambs and wool, peas, lentils, canola, safflower and other crops are grown. The massive wheat silos bear testimony to the central economic rationale of the Wimmera district. Donald is known as the 'Home of the Duck' due to the prevalence of the waterbird on local waterways and possibly because of the irresistible connection with the famous Walt Disney character.

Donald is located 280 km north-west of Melbourne on the Sunraysia Highway. It is 118 m above sea-level.

In 1866 the town was named Donald after the Donald family, William Donald and his two brothers, who established 'Banyenong', a pastoral run, in 1844.

There is an excellent map and detailed brochure with information about the town's main attractions which can be downloaded at https://www.donald.org.au/images/DonaldPDF.pdf.

Heritage Train Park
Adjacent to the railway line, on Hammill Street, is a park with an old J524 steam locomotive, a playground and picnic facilities. The Train Park extends across the railway line where there are a number of wagons including a Caltex Oil Tank - ACTL 8490; a Domestic Water Wagon - DW229 which was built in 1960; a bulk grain wagon - GY 15933; a Weighbridge Test Truck - WTT21 - which is on a frame built in the early 1900s; a 1954 P43 Explosives Van; a 1953 Sheep Wagon; and a 1960 Bogie Guards Van - 12CA. This is part of a planned, and ever expanding, rolling stock museum with the local Lions Club actively seeking "abandoned and vandalised" carriages.

National Bank
Located at 68 Wood Street, this typically handsome and impressive bank building was constructed in 1885 by the Colonial Bank with the manager's residence above the bank chambers. When the Colonial Bank was amalgamated with the National Australia Bank in 1918 it became an NAB and when the NAB amalgamated with the CBC the building was sold off. It subsequently has become a residence and a shop.

Court House Museum
Located in Woods Street next to the Post Office, the Court House Museum is run by the Donald History Group. It has a collection of memorabilia from Donald's businesses and a special exhibition about Donald's Chinese market gardener, Georgie Ah Ling. Tel: (03) 5497 2287 for admission.

The Donald Archive
Located in the impressive Oakey Thompson building (1906) at 58 Woods Street it has comprehensive collections of The Donald Express and The Donald Times as well as an extensive photographic record of the town's residents. It is open Tuesdays, Wednesdays and Fridays from 10.00 am - 4.00 pm. Tel: (03) 5497 2287 for more information.

Police Camp and Historic Buildings
Located on Woods Street at the northern end of town, the old police camp (1874), was built by town founder Johann Meyer using locally made bricks. It replaced a wooden hut which was first established on the site in 1865. Today the "Police Camp" has been added to and has a lock-up and stables (1883), a brick oven from the Marnoo Forest (1880) and a shepherd's hut from the Donald brothers 'Banyenong' run (1850), a dairy, a blacksmith's workshop, a wagon shed, a buggy shed, a Furphy tank and a Bills horse trough. For guided tours tel: (03) 5497 1552 or 0419 281 742.

Scilley's Island Reserve
Over the road from the police camp is an attractive timber bridge which crosses to Scilley's Island, a reserve surrounded on all sides by the river. The island has an Indigenous Plant Garden and a pleasant and easy walking track which is part of the longer Federation Walking Track which includes most of the town's major attractions.

Federation Walking Track
The Federation Walking Track, a shared bike and walking track which passes through town and meanders along the Richardson River, starts at the Police Station and includes the hospital, Post Office, Memorial Hall, Shire Office as well as the Old Police Camp, the Bullock's Head and Kooka's Country Cookies.

Donald's Parks
Apex Park, located between the two bridges at the northern end of town and established by the local Apex Club in the 1970s, has picnic-barbecue facilities and childrens' play facilities. It is particularly distinctive because it contains a giant windmill. This 25 feet (7.62 metres) windmill was originally installed in 1913 at the Donald pumping station to assist the town's water supply. Subsequently it was used for irrigation on the Glengar Station and donated to the community by the Rollinson family from Glengar.
Memorial Park, at the corner of Houston and Campbell Streets, has a childrens' playground, a gazebo and picnic-barbecue facilities.

Bullock's Head
In Byrne Street beside the Richardson River is a growth on a tree which looks like a Bullock's Head. The locals have realised its tourist potential and established a proper viewing platform and lots of signage including a history of the head and a song about the head. Unfortunately it was badly damaged in a storm (or possibly the drought in the early years of the 21st century) and was re-erected using concrete (and/or fibreglass). It still it looks exactly as it did before being damaged ... although it has a slightly artificial appearance.

The Fish Sculpture on the banks of the Richardson River
Across the river from the Bullock's Head is a huge metal "sculpture" of a Nassau Grouper (Epinephelus striatus). It was used as a representation of Belize, in the West Indies, at the 2006 Commonwealth Games in Melbourne and subsequently was donated to Buloke Shire and erected beside the river by the local Mens Shed.

Agricultural Museum
The Recreation Reserve at the front of the showground, on Hammill Street at the north-eastern end of town, is the home of the Agricultural Museum, an interesting collection of historic agricultural machinery including a stump-jump plough, a grubbing machine and a horse-head winnower. The museum was established in the 1960s and has been growing ever since. There is a key at the Mens Shed.

Lake Buloke
Located 18 km north of Donald (head north on Burong Highway and turn left on Sheridans Lane) the wetlands of Lake Buloke (pronounced 'bull-oak') are a breeding area and haven for local birdlife including ducks and quail. The lake is fed by the Richardson River and, when full, is one of Victoria's largest lakes covering 8000 ha and having more than 80 km of foreshore. The sand lunettes on the journey from the Burong Highway to the shoreline were formed thousands of years ago and have evidence of Aboriginal middens.

Lake Gil Gil
Located 7 km north-east of Donald, via the Borung Highway and Jeffgott Road, Lake Gil Gil is a deep lake (it often has water when the district is in drought) with a boat ramp. It is a picturesque spot, is well-stocked with redfin and trout, is good for birdwatchers and is home to long-necked turtles.

Mount Jeffcott Flora and Fauna Reserve
Mount Jeffcott Flora and Fauna Reserve, which was established in 1987 and is located 16 km to the east of the town, has rare trees and plant specimens spread across 262 ha. It is ideal for hiking and it is possible to drive to the summit which offers panoramic views of the district. For more information check out http://parkweb.vic.gov.au/explore/parks/mount-jeffcott-f.f.r.

* Prior to the arrival of Europeans the area was home to the Wemba-Wemba Aborigines.

* The first Europeans in the area were the party of surveyor-explorer Thomas Mitchell in 1836.

* William Donald and his two brothers were the original European settlers. They established 'Banyenong', a grazing station, in 1844.

* The Donald's homestead, located 3 km north of the present townsite, was a social centre for settlers on the Richardson River in the 1860s.

* The township was established when Johann Meyer, a German migrant who had been on the goldfields, set up a grog shanty on the future townsite in 1863. At that time the settlement was known as 'The Bridge' or 'Richardson Bridge'.

* The shire of Donald was established and named in 1864. This year saw a hotel built near the bridge across the Richardson River.

* German, Cornish and Irish selectors began to arrive in the 1870s.

* In 1882 the railway from St Arnaud reached the town.

* In 1895 the Donald Urban Waterworks Trust was formed. It built two reservoirs.

* The Soldiers Memorial Hall was opened in 1923.

* The town's industrial estate was established in 1986. That year a salinity group was formed to deal with problems on Lake Buloke.

* In 1995 Donald Shire was absorbed into Buloke Shire.

There is a useful local website. Check out https://www.donald.org.au. 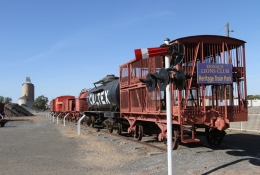 Wagons in the Heritage Train Park 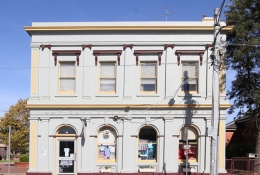 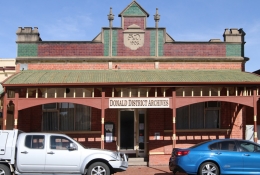 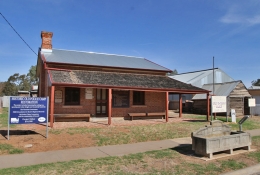 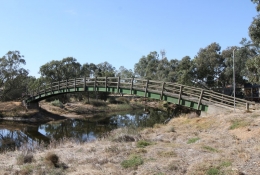 The bridge across to Scilley's Island Reserve 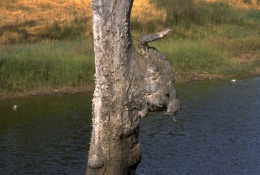 The Bullock's Head before it was damaged in a storm and replaced by a convincing concrete likeness. 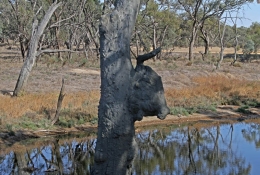 The Bullock's Head beside the Richardson River 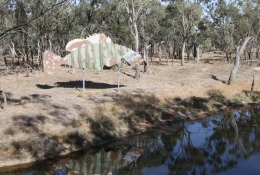 The Nassau Grouper on the banks of the Richardson River