Dongara is a charming fishing village and quiet, family holiday resort at the mouth of the Irwin River. It is characterised by some impressive historic buildings and a main street with handsome stands of Moreton Bay and Port Jackson fig trees. The trees were planted in 1906 for a total cost of 16 shillings and four pence. Dongara is a delightful holiday resort town which is famous for its excellent rock lobsters and its casual atmosphere.

Dongara is located 351 km north of Perth via Lancelin and Jurien Bay.

When the townsite was surveyed in 1873 it became known, although not officially, as Dongara from "Dhungarra" or "Thungarra" which supposedly meant 'a meeting place for seals' or 'place of the fur seals' in the language of the local Aborigines. Dongara was adopted as the official spelling in 1944.

Dongara Heritage Trail
The Dongara Heritage Trail map and detailed history brochure can be obtained from the Dongara-Port Denison Visitor Centre. The walk, which is 4.6 km long, takes around one hour and passes most of the impressive buildings in the town. It starts at the Royal Steam Flour Mill and includes Priory Lodge, Russ Cottage, the Old Police Station and Court House, the Church of St John the Baptist and the gracious houses on Hunts Road.

Priory Lodge
Located at 11 St Dominic's Road, Priory Lodge (also known as the Priory Hotel and Dongara Hotel) is an impressive two-storey building which was built as an inn by William Criddle in 1881, sold to the Dominican Sisters in 1901 (it became St Dominic's Priory), and became a boarding college - Dominican Ladies College - in 1926. In the mid-1980s it became a private hotel before closing in 2018. For more detailed information check out http://inherit.stateheritage.wa.gov.au/Public/Inventory/PrintSingleRecord/20240a36-7c0f-4eb0-9b1f-87feb0ae643e.

Royal Steam Roller Flour Mill
Located on the corner of the Brand Highway and Waldeck Street, the Royal Steam Roller Flour Mill, which was built in 1894, was constructed from locally quarried limestone. It ground local wheat until its closure in 1935. It is characterised "simple corrugated iron gable roof has a small separate gable to the west side. There are finials to the gable apices and a flagpole to the apex of the small gable." It has been listed by the Heritage Council which points out that "The Dongara Flour Mill has high historic significance given its important association with the economic and agricultural development of the Irwin District as well as its association with prominent merchant and grazier Francis Pearse. The place has high aesthetic significance, given its use of local materials, dominant scale, and siting at the main northerly entrance to the town. The Dongara Mill and surroundings have scientific significance for their potential to contribute to the better understanding of the history of the state and the district through the analysis of archaeological material from the place. The place has high social significance given the local community's commitment to its conservation." At its peak the mill was capable of "producing 6 tons of flour per working day, about 7 to 8 sacks per hour." For more information check out http://inherit.stateheritage.wa.gov.au/Public/Inventory/Details/284807b1-f81a-4347-9cda-f7b5b8493ae6.

Russ Cottage
Russ Cottage, on Parker Street, is a charming old cottage which was constructed in 1868. It was built by Titus Russ, a labourer for Edward Hamersley, and is regarded as a fine example of worker housing from the period. It has been furnished in the style of the early farming families and the cottage has been restored. It is possible to enjoy the gardens and there are guided tours of the cottage. Check at the Visitor Centre for opening times. Check https://www.australiascoralcoast.com/destination/dongara-port-denison/russ-cottage for more details.

Old Police Station and Court House
Located at 3 Waldeck Street, the Old Police Station and Court House was constructed in 1870 out of local limestone and jarrah timber which had been shipped in from the south. Its construction cost was £1260. The policeman at the time, Constable Watson, was responsible for the ticket-of-leave men in the area who were working for the local wheat farmers. At the time it was used as "a police station, courthouse, gaol, ticket of leave hiring depot, and police quarters. By 1874 the building had a lean-to addition added to the north side which served as a post and telegraph office."
The State Heritage Council website (see http://inherit.stateheritage.wa.gov.au/Public/Inventory/Details/ba7d15d4-4cfb-4a2f-9224-72318a59df52) describes the building as "'L' shaped with a high pitched hipped corrugated iron roof with separate hipped surrounding veranda roof. In the rear yard there is a small gable roofed building containing the earth closets and the walls to the stables remain intact. The main building comprises a court room, police station, quarters, a day-room and three cells. The limestone walls are 600 mm thick and the courtroom has corrugated iron ceilings 5500 mm high. The original joinery and iron hinge bolts are intact in the cells. The verandahs are supported on timber posts with timber veranda floors. The front windows are double hung timber framed 12 pane, with one casement window to the day room. Timber doors are framed ledge and brace with double entry doors to the courtroom."
The Courtroom replaced the local Irwin Arms as the seat of justice in the area. The first case was heard in 1871 and involved an ex-convict, Thomas Barker, who was fined five shillings for "making use of obscene language at the cricket ground at Dongarra on 10th April, 1871". Today it is used as the Irwin District Museum.

Church of St John the Baptist
Located on the corner of Waldeck and Church Street, the Church of St John the Baptist was built in 1884. The building was consecrated on 18 June 1885. The building was designed by Mr. Bird of Perth and was constructed by William Linthorne, the furniture was made by Mr Hope. The total cost was £600. The church bell was brought from Gaol Hill, Fremantle in 1885 and was used to call the ticket of leave men back to the gaol at night. The stone font was installed in 1913  and the stained glass altar window was replaced in 1980 after the original was broken by a falling tree. The new window depicts St John the Baptist. The pews were made from the driftwood from shipwrecks. For more information check out http://inherit.stateheritage.wa.gov.au/Public/Inventory/PrintSingleRecord/466933c1-9a5c-4601-93b0-beb7062363f7.

Port Denison
Located 3 km to the south of Dongara across the Irwin River is Port Denison (part of the urban sprawl of the two towns) with an impressive marina and harbour. Originally known as Port Irwin the settlement began to grow when a jetty was constructed at the bottom of William Street in 1867. The jetty was built by a Perth businessman, Benjamin Mason, who used both convict and free labour. The total cost was £1350. A second jetty was built in 1959 and a third one was completed, as part of the marina, in 1979. The Port Denison marina has a capacity of about 130 vessels and, as such, is one of the largest marinas on the Western Australian coast. Port Denison has a number of buildings which reveal its importance as a port.

Fishermen's Memorial Lookout and Obelisk
Located on the southern headland at Port Denison, the Fishermen's Memorial Lookout and Obelisk is clearly defined by the red and white obelisk. It offers excellent views over the Indian Ocean and has three bronze plaques recording:
* "H.M.S. Beagle. A Tribute To Lieutenant John Lort Stokes And Crew Of The Survey Ship H. M. S. Beagle. The Beagle A Cherokee Class Brig-Sloop Of Ten Guns Launched 11 May 1820, Surveyed This Coastline In Dec 1844. The Ship's Work Continued For 50 Years For The Admiralty Until 13 May 1870 When She Was Sold. Stokes Joined The Vessel In October 1825 As A Midshipman And Commanded It Between 16 August 1841 And 4 July 1848."
* "Leander. To commemorate the loss of the Brigantine Leander near this point on 11 November 1853. Due to a fault in its chronometer, Leander under Captain R. Johnston, on route from Fremantle to Singapore via Champion Bay, turned for its run into Geraldton too soon and collided with South Leander Reef. As an aid to navigation, this obelisk was erected in 1869.
And a plaque to the fishermen:
* "This Memorial Is Dedicated To The Fishermen Of Dongara - Pt Denison Who Have Lost Their Lives At Sea."
For more information check out http://monumentaustralia.org.au/search/display/61070--%22leander%22.

* Prior to the arrival of Europeans the area was home to the Wattandee Aboriginal people.

* In 1839 Lieutenant George Grey's ill-fated expedition walked from Gantheaume Bay (near Kalbarri) to Perth and thus became the first Europeans to pass through the area.

* In early April 1839 Grey crossed a river which he named the Irwin after Major Frederick Chidley Irwin (1788-1860) who, at the time, was commandant of the Swan River settlement.

* In 1846 the Gregory brothers (Augustus Charles, Francis and Henry Churchman) travelled north from Perth and found both good grazing land and the Irwin River coal seam in the Mingenew area to the east of the coast.

* In the late 1840s Lieutenant Helpmann followed the Irwin River to its source. He reached the present day sites of both Dongara and Port Denison.

* The first settlers arrived near Dongara in 1850.

* In 1852 a townsite named Dhungarra (supposedly meaning 'a meeting place for seals' in the language of the local Aborigines) was surveyed.

* In 1853 the brigantine Leander was wrecked off the coast.

* A horse race was held in the district in 1864. A mail service began that year.

* By 1865 the wheat harvest in the area was sufficiently successful to warrant the building of a flour mill.

* In 1866 a road from Dongara to Mingenew was completed.

* The port, known at the time as Port Irwin and later to be renamed Port Denison, came into existence when a jetty was built in 1867. That year saw the construction of the town's first inn.

* In 1869 obelisks were erected and lanterns were lit at night to guide ships through the dangerous off-shore reefs.

* The Moreton Bay fig trees in the main street were planted in 1906 for a total cost of 16 shillings and four pence.

* By 1912 the town was a popular place for seaside holidays.

* In 1912 David Brand (later Sir David Brand) was born in the town. As leader of the Liberal Party, he was State Premier from 1959-1971 making him Western Australia's longest serving Premier.

* In 1970 a caravan park was established near the beach.

There is a useful and detailed local website. Check out https://dongaraportdenison.com.au. 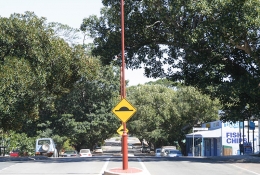 The main street of Dongara 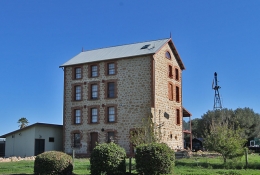 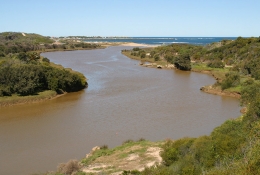 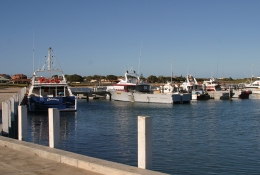 The fishing fleet at Port Denison 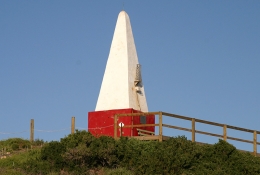 The Fishermen's Memorial Lookout and Obelisk at Port Denison