Donnybrook, scenically positioned on the Preston River, is known as the town at the heart of Western Australia's premier apple growing area. Apart from apples the town is a rural service centre for the local timber, wine, olives, nuts, beef and dairy industries. It also became famous for its excellent sandstone. In recent times Donnybrook has become a popular destination - with excellent accommodation and eating options - particularly in October when the apple blossom is out. The hills around the town are ablaze with the blossom giving the area a very European feel. The stands of jarrah and marri are a reminder of the importance of the local timber industry.

Donnybrook is located on the Preston River 200 km south of Perth and 63 m above sea level.

Donnybrook takes its name from a southern suburb in Dublin, Ireland. It was named by the first European settlers in the area, a group of five Irishmen. In 1842 the party, with four servants, arrived in the district intending to establish farms on the 130 ha they had been granted. The men tried their luck with horses, cattle and sheep but all failed and they had abandoned their settlement by February 1843.

Donnybrook Indigenous Sculpture Park
Located on the Preston River Foreshore in the Gnangangarich Park, the Donnybrook Indigenous Sculpture Park (also known as the Waugyl Sculpture Park) is an opportunity to learn about the history and customs of the local indigenous people. It is a combination of clear, informative signage and images which evoke the traditions of the Noongar.
There are a total of 21 places of interest:
1. The symbol of the hand
2. A site map
3. The Gnangangarich Waugyl story
4. Wuagyl's promise
5. Food and shelter - two food plants
6-11. The story of the river
12-17. The Six Seasons
18. The campsite symbol
19. The emu and the bush turkey
20. Plant information
21. Two emu stories and Kower's gift
A typical sign is No.4 - "The Waugyl and His Promise" which recounts the following story: "Sometimes there in the old days it would get pretty hot and everything drying up. The Noongars would be standing around nodding their heads. 'See how hot it is! That old waugyl, he's forgotten his people!' They pick some strong men to go pull that waugyl out of his cool place in the yandjet (bulrushes). But that waugyl does not want to come out. He wraps his tail around a rock. But those men pull him out to twist and turn on the hot sand. 'See how hot it is. Have you forgotten your people? Send us some rain. Soon little clouds come in the sky, like the scales on the waugyl's belly. The waugyl has not forgotten his people - the rain will soon come."

Donnybrook Railway Station
Located in the centre of town and constructed in 1893, the Donnybrook Railway Station is now also the Visitor Information Centre. It is listed by the State Heritage Office which notes: "Donnybrook Railway Station is composed of two separate timber weatherboard pavilions in the Inter-War Georgian Revival style with a gap of about 5 metres between them. The hipped Marseilles tiled roof extends across this area and also cantilevers out on brackets to form a roof over the platform and at each end of the building. Donnybrook Station Master’s House is a single storey weatherboard building with a gable corrugated iron roof and skillion verandahs to front and rear which have been enclosed. The corrugated iron goods shed is located on the western side of the railway line and the crane has been taken into storage." For more information check out http://inherit.stateheritage.wa.gov.au/Public/Inventory/Details/da413bfd-1f32-40b9-a621-55d364ab5eed.

Anchor & Hope Inn
Located at 2 South Western Highway, the National Trust listed Anchor & Hope Inn dates back to 1845 and is "believed to be the oldest habitable building in the Donnybrook district". The National Estate listing of the building points out "The original pug structure, built by Henry Trigwell and Henry Wood in 1845, was rebuilt by George Lawrence in 1865. The bricks were burnt on the property and the original shingled roof was later covered. The ceiling matchwood was specially imported. Built in a style similar to most early colonial homes, it is the oldest homestead in the district, and was occupied by the Trigwell family for four generations. Situated on the main road, the building was conducted for years as one of a chain of roadside inns on the road to the south-west of the colony." The State Heritage Office notes that the "Anchor and Hope Inn is a single storey brick building with a moderately pitched hipped roof in the Victorian Georgian style. There is a verandah along the front facade and two squat brick chimneys. The front facade comprises two doors and six casement windows." for more information check out http://inherit.stateheritage.wa.gov.au/Public/Inventory/Details/0085c26e-bd39-4bf9-b5c5-8abd11b71e97.

English Oak Tree
Located near the town's railway station is, reputedly, the largest English Oak tree in Australia. It was probably planted in 1893.

Walk Trails Around Donnybrook
Preston River Walk Trail
Starting at the Sculpture Park the Preston River Walk Trail is a loop of 5 km which takes around two hours. It is clearly marked and has a few low gradients. The trail passes along the river and includes the suspension bridge, the crossing of the weir (when the river is suitably low) and includes both the Preston River Indigenous Walk Trail and the Waugyl Sculpture Park. There is a map and signage at the start of the walk. For more information check out https://trailswa.com.au/trails/preston-river-trail-donnybrook/print.

Lions Sandhills Walk Trail
The trail starts at the corner of Frost and Montgomery Road. It is a 4.7 km loop and takes around two hours, passes through jarrah forest, and is particularly impressive during spring when the wattle is in bloom. For more information see the signage board at the start of the walk or check out https://trailswa.com.au/trails/sandhills-track-donnybrook.

Lions Forest Walk Trail
Starting at the Donnybrook Cemetery this is a 3.7 km bush walk which takes around 90 minutes. It offers excellent views over the town and the surrounding orchards.

AppleFun Park
Located on the main street (South Western Highway) at the northern end of town the AppleFun Park was created by the Donnybrook Community and is, reputedly, the largest free entry community owned fun park in Australia. It is designed for the whole family and has BBQ facilities, toilets, parking, and shaded picnic tables. It is floodlit at night.

The Big Apple
The Big Apple is located 6 km north of Donnybrook. The apple itself is 7.5 metres high and has a diameter of 6.5 metres. It is a replica of a Lady William apple, was built of fibreglass in 1988, and sits on top of a tower. In 2018 it was written about as "The Donnybrook Big Apple that fitted on top of the high tower was made by member Christine Blowfield's father! ... Christine says: "His business was Pacemaker Boats. Dad thrived on doing different things like this and really enjoyed it. He is very clever at designing and nutting out problems! It was made in Feb 1983. The staircase was made by GD Prosser Engineering, Geoff Prosser who were in Denning Road as well. It has 90 cubic metres of concrete in the footings and was 27 metres tall. The apple tower is still there, on private property but the Deer Park has now been closed for over 20 years (so you can't visit it anymore for those asking). Peter also made the huge set of antlers that guided you through the entrance. The one and only time its been open since as a one off was on the 13th Nov 2011. The tower was 28.5m high, apple is 7m wide, 20.3 tonnes of tower structure, 1.8 tonnes of fibreglass, and 180 tonnes of concrete!"

South-West Rail and Heritage Centre, Boyanup
Located 16 km north of Donnybrook, the tiny settlement of Boyanup is known for the remarkable South West Rail and Heritage Centre. Located in Turner Street, Boyanup the centre is normally open on the fourth Sunday of each month and a visit includes "the historic rolling stock and agricultural machinery collections housed on site. Also on hand will be the men of the Capel Men's Shed with their hand made timber work, the blacksmiths working in the traditional way, and often special displays by visiting groups on the theme of that day."  Check out http://railheritagewa.org.au/museum/pages/swrhc/index.php for detailed times of opening and information about the centre.

Donnybrook Sandstone
Donnybrook is noted for its sandstone which has been used extensively in Perth's public buildings. The GPO, St Mary's Cathedral, the AMP building and the University of Western Australia buildings have all been faced with Donnybrook stone. The quarry can be seen from the Upper Capel Road which lies to the south of the town.

* Prior to the arrival of Europeans the area was home to the Noongar Aboriginal people.

* Donnybrook was named by the first European settlers in the area, a group of five Irishmen. In 1842 George Nash and a party, with four servants, arrived in the district intending to establish farms on the 130 ha they had been granted.

* The farms were short lived. The men tried their luck with horses, cattle and sheep but all failed and they abandoned their settlement by February 1843.

* By 1868 the Anchor & Hope Inn was licensed and providing accommodation for travellers through the area but there is little evidence that Donnybrook was anything more than a very tiny settlement.

* In 1899 the Donnybrook Goldfields company was floated on the London stock exchange.

* The first Granny Smith apple tree was planted in 1900.

* By 1904 the field had effectively closed down.

* After World War I the apple industry developed with George Parke the first orchardist to plant apples commercially in the area.

There is a useful local website. Check out https://www.donnybrookwa.com.au. 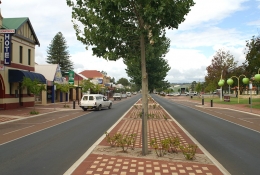 The main street of Donnybrook 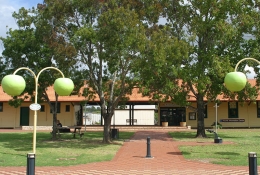 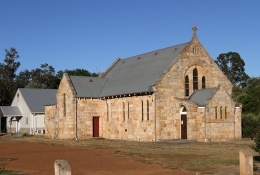 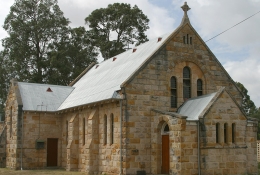 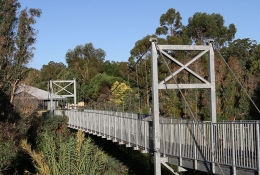