If you plan to travel the rough dirt road from Borroloola in the Northern Territory through to Burketown on the Gulf of Carpentaria  in Queensland (an unforgettable journey), then, of necessity, you will pass through Doomadgee. The town is not a tourist destination but rather a well developed and successful Aboriginal community with a population of around 1200 of which over 90% are from, as the Shire Council website puts it: "The traditional homelands of the Gangalidda and the Waanyi people ... around the Doomadgee Shire. There are also Garrawa and Yunjulla people and a range of people from Indigenous nations across Australia have made Doomadgee their home.” The town provides basic services for the traveller with a general store providing both food and fuel. There are minimal accommodation and no eating facilities.

Doomadgee is located 2,198 km north-west of Brisbane via Longreach and Cloncurry. It is 127 km west of Burketown and 398 km from Borroloola.

The town's name comes from "Dumaji" a word in the Gangalidda language which describes a coastal sandy mound.

Swimming and Fishing
The river has a couple of excellent swimming areas but this is country owned and controlled by the Shire and you need permission. There are also some rather well-sized barramundi to be caught. Permits from Council are required for visitors wishing to fish on the reserve.

* Prior to the arrival of Europeans the area was home to the Waanyi and Gangalidda Aboriginal people.

* The original mission, known as Old Doomadgee, was established by Len and Dorothy Akehurst on the coast near Burketown in 1933. It was established by the Christian Brethren after the local police sergeant in Burketown suggested that the local Aborigines, predominantly the Gangalidda people, would be happier if they were removed from the fringes of the township.

* By 1934 the community had 10 Aboriginal boys and 10 girls who had come from the Burketown mission.

* The settlement was moved inland to its present location on the Nicholson River after a cyclone in 1936 made conditions on the coast impossible. The coastal site had never been satisfactory as it lacked a good and reliable water supply.

* The present site was settled in 1937 with the building of log hostels and a school. Located on the Nicholson River and with a good local well the people survived on bush tucker and vegetables they grew in their gardens.

* During the 1950s the town acquired a bank, a general store, a post office and a bakery.

* By 1974 more than 100 Aborigines had been moved from Burketown to Doomadgee.

* In the early 1980s the government moved to establish self administration at the mission. The Christian Brethren workers, most of whom were working as school teachers, helped to establish the Aboriginal council and for a number of years worked in conjunction with the local elders to ensure that there was a smooth transition of power.

* In 1983 the Gangalidda people gained control of the town.

* In 1985 the Doomadgee Aboriginal Council was created.

* By 2005 the town was controlled by the Doomadgee Aboriginal Shire Council.

There is no official visitor information centre in the town.

Contact the Doomadgee Aboriginal Shire Council (07) 4745 8235 for permission to stay in a council-run guest house. There is a form which can be filled out at http://www.doomadgee.qld.gov.au/guest-house-bookings. Requests to camp within the Shire may be considered, but requests must be made to the Council, who can direct the request to the appropriate traditional owners and provide advice on protocols. Permits from Council are required for visitors wishing to fish on the reserve.

Check out https://www.doomadgeeroadhouse.com.au/poi/explore-doomadgee for information about eating in the town.

The Shire Council website has a lot of useful information. Check out http://www.doomadgee.qld.gov.au. 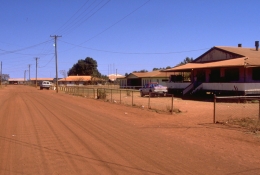 The main street of Doomadgee in 1988 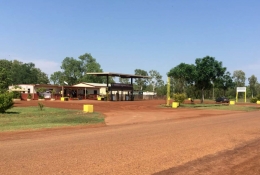 The Roadhouse - the vital link between Borroloola and Burketown 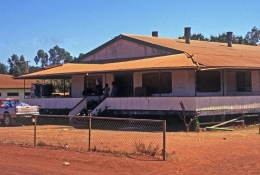 One of the famous dormitories established by the missionaries (Photo: 1988)