Southernmost town of importance in Australia.

Dover is recognised as the southernmost town of significance in Australia. There are settlements further south but Dover is the last place where you can buy petrol and supplies. Some of the villages on Bruny Island are further south. Picturesquely situated on Port Esperance, Dover offers excellent views across the water to the islands named Faith, Hope and Charity. It is possible to sail across to Faith Island where there are a number of historic graves which were established in the 1840s when Dover was a convict probation station.

Dover is located on Port Esperance 81 km south-west of Hobart via the Huon Highway. It is recognised as the southernmost town of significance in Australia.

It is probable that Dover takes its name from the famous English town of the same name. Wondering why this would be the case, some have suggested that huon pine shipped from Tasmania was used in the construction of Dover Pier and this was a simple way of acknowledging the connection.

Walking on the Kent Beach
There is a park along the shoreline of Kent Beach and the Kent Beach Road offers delightful views of the three islands Faith, Hope and Charity which were reputedly named to inspire the convicts at the local probation station. This is a quiet and peaceful section of the southern coastline which is well protected from the prevailing Roaring Forties.

The Ida Bay Railway
Located at Lune River (23 km south of Dover) the Ida Bay Railway is a delightful two hour trip (7 km each way) through peaceful Tasmanian bushland from 328 Lune River Road, Lune River along the shores of Ida Bay. On the route it passes the old Ida Bay wharf and graveyard, the site of Jagers sawmill and reaches Deep Hole Bay. The tramway was constructed in 1922, is known to be the most southerly railway in Australia, and the carriages (some are built on bogie wagons dating from the 1890s) are driven by two Malcolm Moore diesel locomotives. In the summer months the tramway journey is made at 9.30 am, 11.30 am, 1.30 pm and 3.30 pm seven days a week. This is reduced in the winter months to Friday, Saturday, Sunday and Monday at 10.00 am, noon and 2.00 pm. Tel: (03) 6298 3110 or check out http://www.idabayrailway.com.au/. There is a video of the journey at http://www.discovertasmania.com.au/about/regions-of-tasmania/hobart-and-south/dover.

* Prior to European settlement the area around Dover was inhabited by Nuenonne Aboriginal people for at least 30,000 years.

* In 1792 Bruni D'Entrecasteaux explored the area and named the bay Esperance after L'Esperance, one of the vessels in his expedition.

* Dover was originally established as a convict probation station and operated between 1844 and 1848. There is now little evidence of the town's penal past.

* After the convict settlement the small town developed as a port - the main activity was shipping huon pine to the world.

* By 1850 there were a number of sawmills in the area. It is claimed that the link with Dover in England is that huon pine shipped from this area was used in the construction of Dover Pier.

* The Dover Rivulet is shown, and Dover Station mentioned, in Field Notes published in 1850.

* In recent times the town has become an important fishing port with the local fleet fishing for salmon, abalone and crayfish.

There is no Visitor Information Centre at Dover. The closest is the Huon Valley Visitor Centre, 2273 Huon Highway, Huonville, tel: (03) 6264 0326. Check out http://www.huonvalley.tas.gov.au/region/visit-us.

The Huon Valley Council website can be accessed at http://www.huonvalley.tas.gov.au/region/visit-us. 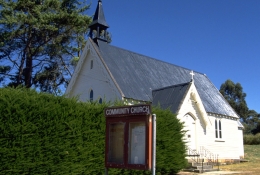 The Community Church in Dover. 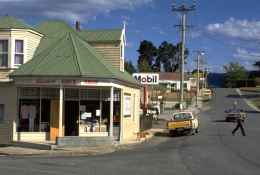 In 1990 the corner store was Rosies Gift Shop. Today it is the Gingerbread House selling continental pastries. 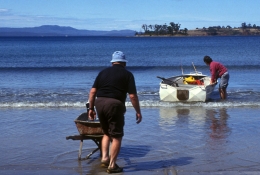 Anglers getting ready to go fishing with the islands Faith, Hope and Charity in the background, Dover (photo taken 1990) 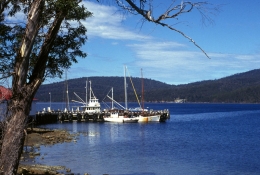