Dowerin is a typical quiet wheatbelt town which services the surrounding wheat and sheep farmers. It is teetering on the edge of survival with a number of shops having closed, the town being particularly sleepy has developed a number of overt attempts at attracting tourists including the Tin Dog on the main road and the unusual park over the road from the Tin Dog which features three wise monkeys and some Chinese statues.

Dowerin is located 165 km north-east of Perth via National Highway 94 and Goomalling Road.

It is believed that 'Dowerin' is derived from the word 'Daren' which was, reputedly, the name the local Ballardong Noongar people gave to the lakes to the south of the town. There is a debate as to whether the word is derived from 'dowarn' the Ballardong name for an Australian Ringbark parrot or from 'dower' meaning 'throwing stick'.

Dowerin Museum
Dowerin Museum is located at 16 Cottrell Street - the house was built in 1915 and owned by the O'Shaughnessy family. It was lived in until 1968. The local historical society have preserved it as a typical example of a Western Australian wheatbelt home of the 1920s and 1930s. The house is notable for its exceptional pressed metal walls and the displays are an extensive collection of interesting furniture and clothing including old style swimming costumes and antique under garments.

Dowerin GWN7 Machinery Field Days
Dowerin's annual agricultural field day (held on the last Wednesday and Thursday of August) which is said to be the largest rural event in Western Australia. In recent times it has expanded so that the website now proudly declares: "From tractors to cheeses, water tanks to stud rams, fencing products to fine wines, the Dowerin Field Days has it all! Whether you are looking to build a house, upgrade your farming machinery, invest your money, increase your stock or decorate your family home, it really is your one stop shop!" Check out http://www.dowerin.wa.gov.au/about/dowerin-field-days/ for details.

The Tin Dog
On the edge of town is a large sculpture of a rusting Tin Dog. There’s a placard beside it which reads “Hello! I’m Rusty the Tin Dog. I was born in 2004 when the children of Dowerin District High School developed a project initiative to encourage people to stop in Dowerin. The students helped with the initial design, sourced funding for the materials [Lottery West, the World Wildlife Fund, Greening Australia among others] and employed an artist to build me.” It is a fitting monument to the tenacity of the local students who want their town to survive although modern transportation has made it redundant. Over the road are a number of statues of Chinese warriors, the three wise monkeys and other figures in a very dry park beside near the Information Board.

* Prior to European settlement the area had been occupied for tens of thousands of years by the Ballardong Aboriginal people.

* The area around Dowerin was visited periodically by prospectors and shepherds during the 19th century. It was popular because there was reliable water in the area.

* In recent times mechanisation has made wheat and sheep farming a lot less labour intensive. This has reduced the size of the district's population.

There is a useful local council website - http://www.dowerin.wa.gov.au - with information about the local area. 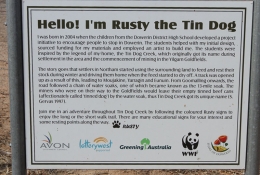 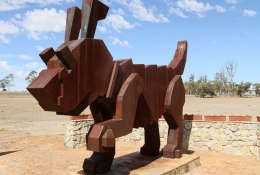 Rusty the Tin Dog at the entrance to Dowerin. 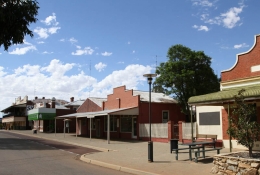 The sad main street of Dowerin 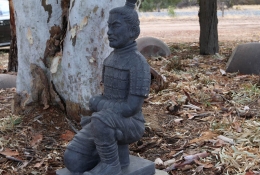 A Chinese warrior statue beside a gum tree at Dowerin. A tourist attraction? 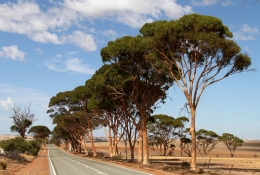