Residential and holiday town on the Bellarine Peninsula

Drysdale is located on the Bellarine Peninsula and, although once noted for its potato and onion production, in recent years it has become a residential satellite of Geelong. Historically a pleasant holiday resort - with people visiting to "take the waters" at Clifton Springs - it has become part of the larger urban sprawl along the shoreline of Port Phillip Bay.

Drysdale is located on the Bellarine Peninsula, 98 km south-west of Melbourne and 22 km east of Geelong. It is 65 metres above sea level.

Drysdale is named after Anne Drysdale who, with her partner Caroline Newcomb, established a property named Coriyule near the town in 1843.

Bellarine Peninsula Railway
The 16 km Bellarine Peninsula Railway is run by the Geelong Steam Preservation Society. It has a number of vintage steam locomotives and carriages which take passengers on return trips from Drysdale to Queenscliff. The journey, which takes 50 minutes (one way), includes views over Swan Bay, the Bellarine Hills, Corio Bay and Port Phillip Bay. The station is located at Lake Lorne Reserve, just off the main Geelong-Portarlington Rd (High St), at the southern end of town.
An all-weather cycling and walking trail runs parallel to the railway track and those wishing to take the train one way and ride a bicycle back can transport their bikes. The trail continues from Drysdale along the original rail line as far as South Geelong. Trains can also be hired for special occasions. Contact (03) 5258 2069 for bookings and further information. The Drysdale booking office is tel: (03) 5251 3725. The best way to book is to check out http://bellarinerailway.com.au which has times, schedules, fares and a page for booking.

Old Court House Museum
Located in the former Court House (1882) at 11 High St, is the Bellarine Historical Society Museum. The museum is open on the first Sunday of each month from 1.30 pm - 4.30 pm and every Sunday in January. The museum aims to "preserve the history of the Bellarine Peninsula". For more information check out https://www.bellarinehistory.org.

Anglican Church
Located at 45 Collins Street, St James' Anglican Church (1872) is listed on the Victorian Heritage Database which notes: "St James Church of England at Drysdale was erected in 1872 using local brick maker Widdiscombes' red and cream brick in an Early English Gothic design by Geelong architect Andrew McWilliams. Bishop Perry opened the church on 22nd July 1872. The simple lancet windows, modest dichromatic brickwork, central tower and finely executed interior are the principal features of this typical country parish church of the 19th century. The use of T. H. Widdicombe's purpose-made white bricks and tiles was an innovative feature at the time of construction in 1872."

Drysdale Park and Recreation Reserve
Located off Wyndham Street, the Drysdale Recreation Reserve is an ideal place for a picnic. It has a range of sporting facilities, a beautiful area with pine trees and the impressive McLeod's Waterhole. See https://www.geelongaustralia.com.au/parks/item/drysdalerec.aspx for a map and further details.

Clifton Springs
Clifton Springs is effectively part of Drysdale. It occupies land on the foreshore of Port Phillip Bay and has grown out of a separate settlement named after the mineral springs which were discovered below the cliffs in 1870. In the late 19th century the mineral waters were believed to have health-giving medicinal value and, together with the seaside atmosphere, they attracted many holidaymakers eager to "take the waters". The area was also popular with yachting and boating enthusiasts and a pier, hotel, baths and a kiosk were built with steamers conveying people from Melbourne. The mineral water was bottled and sold and the pier was extended in 1889 to accommodate the growing custom as Clifton Springs began to rival Queenscliff as a favourite holiday resort.

Bellarine Rail Trail
The Bellarine Rail Trail runs beside the Bellarine Peninsula Railway from Queenscliff to Drysdale and then on to Geelong. The total distance is 32.5 km and the surface, which is generally flat, ranges from fine gravel to sealed roads. It is possible to mix and match with the railway capable of carrying bicycles from Drysdale to Queenscliff. It became a Rail Trail in 2000. There is a detailed description of the rail trail at https://www.railtrails.org.au/trail?view=trail&id=139.

Coriyule Homestead
Located at 1-69 McDermott Road, Curlewis, Coriyule, as the Victorian Heritage Database (see https://vhd.heritagecouncil.vic.gov.au/places/342) explains: "is a two-storey picturesque colonial Gothic house of locally quarried stone. The foundations are basalt, the window and door surrounds and the chimneys are of dressed Barrabool Hills sandstone, and the walls are unusual in being of several kinds of stone, including ironstone, limestone and quartzite, laid in coursed rubble work.”
It also notes that “It is undoubtedly the most distinctive work of the celebrated colonial architect, Charles Laing, prior to 1851. This asymmetrical plan mansion with unusual entry hall and staircases has a few counterparts in Australia. The partnership of zealous women squatters, Drysdale and Newcomb, is of paramount significance to the history of pastoral enterprise in Australia ... Coriyule at Drysdale was built in 1849 for pioneer squatting partners, Anne Drysdale and Caroline Newcomb. Drysdale was an unmarried Scottish gentlewoman, who in 1839, aged 47, migrated to Port Phillip for health reasons. She was well educated and well connected, had owned a farm in Scotland, and intended to farm sheep in the colony. She first took up a squatting run at Boronggoop, on the Barwon River near Geelong, where she built a four room cottage. She formed a partnership with Caroline Newcomb, an Englishwoman who had come to Port Phillip in 1836 as governess to the children of John Batman, one of the founders of Melbourne, and together they ran the sheep station.”
The two women are given a full biography in the Australian Dictionary of Biography (see http://adb.anu.edu.au/biography/drysdale-anne-2000) which notes: “Anne Drysdale died on 11 May 1853. After her partner's death Caroline Newcomb continued to run the Coryule property and to take an active part in local affairs; in June 1855 she convened the first meeting of the Ladies' Benevolent Association of Geelong. On 27 November 1861 she married the Wesleyan minister of the township named after her partner, Rev. James Davy Dodgson (1824-1892), who had arrived in the colony in 1857. She died at Brunswick on 3 October 1874, and was buried beside Miss Drysdale at Coryule; their remains were later removed to the Eastern Cemetery, Geelong.
“A firm friendship developed from the business partnership. Both women were cultivated, energetic, independent, and God-fearing; but they were dissimilar in background and in temperament. Anne Drysdale combined the dignity that befitted her secure social position with a quiet determination, a cheerful tolerance, and a readiness to take the bad with the good. Lacking the same support of private means and family connexions, Caroline Newcomb had to rely on personal qualities in making a place for herself. She won esteem as an excellent horsewoman and a vital, intelligent, and kindly personality, although in later life her self-assertiveness and quick temper apparently gave her a formidable demeanour. Anne admired, and perhaps envied a little, the younger woman's abilities, and came to depend on her, not only for companionship, but also for much of the drive and initiative that secured their comfort and prosperity. Both were sustained by an abiding religious conviction, but it was Caroline who presided over their daily devotions, who actively propagated the gospel, and who left, in fragments of her personal diary, the record of her struggles to master her own nature and attain grace.”
Unfortunately the home is private and only open to the occasional group. It is located beyond a dense border of large trees. Prying, curious eyes are not welcome but, courtesy of Google Maps, it still looks very elegant from the air. It can’t be seen from the road.

Scotchmans Hill Winery
Located at 190 Scotchmans Road, Scotchmans Hill Winery was established in 1982 and is worth visiting as it offers superb views over Port Phillip Bay ... and has some exceptional cool climate wines for sale. It produces pinot gris and an award-winning chardonnay, along with cabernet sauvignon, sauvignon blanc and riesling. The cellar door is open daily from 10.30 am to 4.30 pm, tel: (03) 5251 4431. For more information check out https://www.scotchmans.com.au.

Tuckerberry Hill
Located at 35 Becks Road, Tuckerberry Hill, a berry and fresh produce farm, is open Friday to Sunday from 9.00 am - 4.00 pm.  It specialises in local produce and has a charming cafe. It is possible to pick your own blackberries from 26 December to the end of February. Blueberry jams, juice, chutneys, muffins and toppings and blueberry plants are available all year round, tel: (03) 5251 3468. Check out their Facebook page at https://www.facebook.com/pg/TuckerberryHill.

* The first European in the area was Lieutenant Murray who spent over three weeks exploring the coast in 1802.

* The first European settlement on Port Phillip Bay was established in 1803 and abandoned the following year.

* The town is named after Anne Drysdale who, with her partner Caroline Newcomb, established a property named Coriyule at the edge of the present townsite in 1843.

* Coriyule's sandstone homestead, built in 1849, is the oldest structure on the peninsula. That year a Presbyterian and a Methodist church were built in the settlement.

* Drysdale developed in the 1850s and was initially known as McLeods Waterholes.

* Drysdale became the administrative and commercial centre of the Bellarine shire when that shire was proclaimed in 1865.

* From the 1870s visitors were drawn to the mineral springs at what is now Clifton Springs and to the boating opportunities available from the coast.

* In 1879 the Geelong-Queenscliff railway opened. It was designed to carry troops in case of a Russian invasion.

* A butter factory was opened in 1891. That year saw the opening of United Service Home for old veterans. It cost £2,000 and was opened by the Governor.

The local Drysdale website can be accessed at https://www.visitgeelongbellarine.com.au/destinations/drysdale. 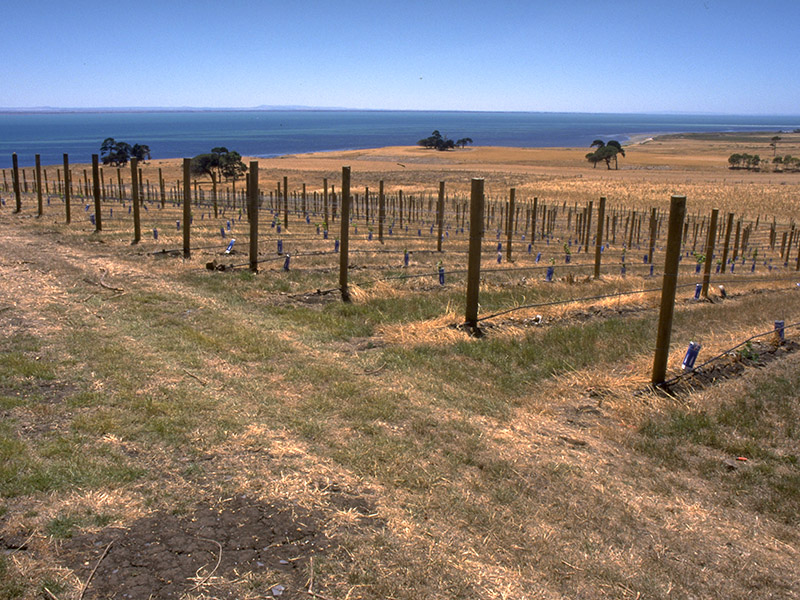 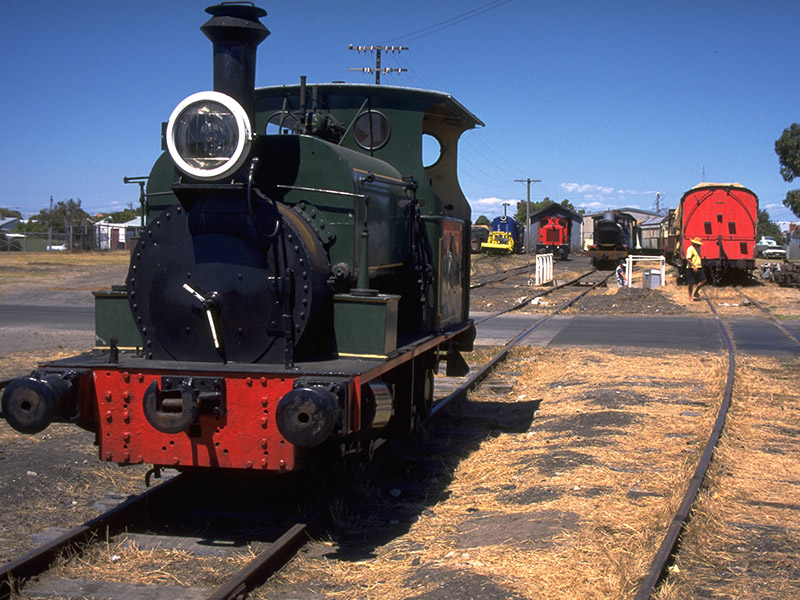