Dumbleyung is located 271 km south east of Perth via the Albany Highway and the Wagin-Dumbleyung Road.

No one knows exactly how the town got its name but it is likely that it is a corruption of the local Aboriginal word "dambeling" which possibly meant "large stretch of water". An alternative theory argues that it may well be derived from "dumbung" which either meant "a native pear tree" or "an Aboriginal game played with bent sticks and a hard piece of fruit" or "a place where dumbung is played".

Bluebird Interpretative Centre
Located at 28 Absolon Street and open from 9.30 am - 4.30 pm on Mondays and 9.00 am - 4.30 pm Tuesday to Friday (it is closed on weekends) the Bluebird Interpretative Centre has lots of information about Donald Campbell as well as guides, maps and information about the town and surrounding district. It proudly announces that it contains memorabilia, information plaques, merchandise, wifi access and has a cafe.

Bluebird Replica
Located on Absolon Street, this replica of Donald Campbell's famous boat has been on permanent display since 2014 when it was "launched" to celebrate the 50th Anniversary of Campbell's famous world water speed record. The jet propelled hydroplane boat was built by Mark Motzouris at Jurien Bay, arrived in Dumbleyung in 2014 and was unveiled by Gina Campbell, Donald Campbell's daughter. The shelter has extensive signage explaining the historic speed record. It is located in a specially built and designed shelter (The scenic laser cut backdrops on the back and side walls were designed by Amy Bairstow) which turns blue at night and has the stars of the Southern Cross on the roof. For more information check out http://dumbleyungbluebird.com.au.

1. Town Hall
Located in Dawson Street, the Town Hall was built in 1929 by a group of local citizens but they could not meet their loan repayments and it was taken over by the Dumbleyung Road Board. Behind the hall is an old powerhouse which was used to provide DC power to the town from 1929 to the mid-1960s when the town was finally connected to 240V electricity.

"Taking Tea" Statue
Located in Absolon Street the bronze life-sized statue titled "Taking Tea" was dedicated in 2013 and commemorates the contribution of members of the Country Women's Association (CWA) in Dumbleyung. The organisation, which dates back to 1922, started in Dumbleyung in 1930 and ran continuously until 2013.  The statue is dedicated to all past and present members. It depicts two women having a "cuppa" together and has an older women pouring a cup of tea to a younger woman. Check http://monumentaustralia.org.au/themes/culture/community/display/102220-%22taking-tea%22- for more details.

Lake Dumbleyung
Located to the south-west of Dumbleyung, Lake Dumbleyung's main attractions can be accessed by driving 13 km from Dumbleyung via the Wagin-Dumbleyung Road and then taking a left onto the unsealed Kersley Drive. This takes the visitor to the shoreline at the Dumbleyung Yacht Club and the memorial to Donald Campbell on Pussy Cat Hill.
Lake Dumbleyung is the largest natural body of inland water in Western Australia. It is approximately 13 km long by 6.5 km wide with a catchment area which extends 64 km north towards Kulin, 64 km south towards Narrangerup and 55 km east to Tarin Rock.
It was first sighted by Henry Landor and Henry Maxwell Lefroy who described the lake in their journal entry for 17 January 1843. "After riding 10 miles, we came in sight of Dambeling, the largest of the lakes - 13 miles by 7 or 8. It is like the others, shallow with many low islands in varied and beautiful form. On the northern and eastern shores, there is a good grazing country down to the lake, ending in precipitous banks and extending over the hills 2 or 3 miles distant from the lake. The water is salt and the shore long, flat and muddy, on which we saw the impressions of two stray horses and a foal..." Early accounts describe the lake as having grass covered banks and the saltbush provided valuable grazing for stock. In recent times the lake has suffered greatly from the salination which has affected the whole of the wheatbelt. When there is water in the lake it is popular for water skiing, paddle boarding, kayaking, canoeing, and boating. There is a useful map of the lake with directions to Pussy Cat Hill, the Yacht Club an the Ski Club at http://docs.wixstatic.com/ugd/796ff7_bdf959c20da64d12a47227b4497e96e7.pdf

Donald Campbell Memorial
On New Years Eve 1964, after a particularly wet winter had seen the lake fill to overflowing, Donald Campbell set the world water speed record when he raced his boat Bluebird across the lake at 444.66 km/h (276.3 mph). This made him the fastest man both on land and on water. A unique double. A memorial to Donald Campbell's achievements is located on Pussy Cat Hill on the lake shoreline. Offering excellent views over the lake, it is clearly signposted 'Scenic Drive - Lake Dumbleyung' on the road from Wagin to Dumbleyung.

How to See WA Wildflowers - A Guide
When planning a trip there are a number of very simple rules.
(1) Start by downloading Your Holiday Guide to Western Australia’s Wildflowers at http://www.westernaustralia.com/en/things_to_do/forest_and_flowers/pages/wawildflowers.aspx#/. It is a comprehensive guide to the wildflowers. There are over 12,000 species and 60% of them are found nowhere else on the planet.

(2) There is a tendency to say "But I won't know what I'm looking at" but that is rubbish. There are a number of great books and the best, by far, is the answer to "Wildflowers for Dummies" titled "Colour Guide to Spring Wildflowers of Western Australia". It is privately published by Wajon Publishing Company, written by Eddie Wajon, and comes in three volumes – 1. Kalbarri and the Goldfields, 2. Perth and the Southwest and 3. Esperance and the Wheatbelt. They can all be purchased online from Kings Park & Botanic Garden in Perth. Check out https://www.aspectsofkingspark.com.au.
The publication's design masterstroke is that the flowers are listed according to their colours and all the pages are colour coded. Thus Mr and Mrs Wildflower Illiterate, when gazing at a Spiny Synaphea, only need to open at the "yellow flowers" section and flick through until they find the colour photo which matches the reality. The company can be contacted directly on (08) 9310 2936.

(3) No one should ever underestimate the power of local knowledge and assistance. The Western Australian wheatbelt, probably because of the declining prices for both wool and wheat and the increased levels of salinity, has decided that the spring wildflowers are a good for the local economy and worthy of patronage. When innocently asking where I might see a wreath flower (they are a flower which naturally forms itself in a circle like a wreath – particularly appealing to those with a morbid interest in death) at the local coffee shop in Morowa I was told that there were some in the area but the person who knew was at the information office.
At the information office I was advised, and this is verbatim, to "drive down the main street until you see the road that crosses over the railway line, drive across the line and past the Police Station and Fire Station (or is it the SES), turn right at the next road, continue up past the sheds for a couple of hundred yards [metres haven't arrived here yet] and you'll see some beside the road". Absorbing the instructions I headed off and three minutes later, having noticed a sign reading "Wreath Flowers" on a fence, I found the plant.
Morowa also publish a leaflet titled "Morowa Wildflower Drives" which, if you were thorough, could keep you in the area for a couple of days.
At the next town, Mingenew (which, for lovers of Australian Big Things now boasts the Big Wheat Stalk – known locally as "Big Ears") the information centre provides both a map and a list of locations with details like "20 km on the Pingelly road on the left hand side there are some excellent wreath flowers". And at Watheroo there's a wonderful local mud map with wryly enthusiastic comments like "Heaps of banksia, grevillea, snake bush etc along the road" and, getting quite technical "Rare and Endangered. E. Rhodantha (rose mallee) Only large patch in the world".

(4) There is a logical route which can be honed or expanded according to the amount of time you want to spend.
The best starting place, if you want to get a good foretaste of what you are about to experience in the wild, is to visit Kings Park & Botanic Garden in the heart of Perth. Apart from offering sensational views over the Swan River and the Perth CBD the gardens boast a 17 hectare area which has more than 1700 native species of wildflowers. This is, not surprisingly, rather pristine and not very wild but it does allow you to develop a working knowledge of devils pins, kangaroo paws, desert peas, everlastings, starflowers, grevilleas, firebush, a range of orchids and hundreds of other natives.
You really don't need to be a flora expert. All you need are your eyes and a sense of wonder because the Western Australian wildflowers in spring really are as remarkable and significant as a unique part of Australia as Uluru, the Great Ocean Road or Cradle Mountain.
For information about wildflowers around Dumbleyung and Lake Dumbleyung tel: (08) 9863 4012. The best time is the two months - September and October. The Shire of Dumbleyung map at http://docs.wixstatic.com/ugd/796ff7_fbee5e21ce47456babe325dc376d76ea.pdf identifies three specific areas where wildflowers are easily observed.

Heritage Schools
Since the 1980s Dumbleyung has had a map guiding people to the 26 tiny rural schools scattered throughout the shire. If you are interested in the 26 historic school buildings, all of which were constructed between 1905 and 1940, check out the map at http://docs.wixstatic.com/ugd/796ff7_768280b331804ea9a218fccabf30b5a1.pdf.

* The first recorded sighting of the lake by Europeans was in 1843 when two explorers Henry Landor and Henry Maxwell Lefroy travelled through the area looking for pastoral lands and a large body of water.

* The first grazing leases around Lake Dumbleyung were granted in 1875 to George Kersley who overlanded sheep from Beverley and took up a lease of 20,000 acres which included half of the lake.

* The pastoralists were followed by the sandalwood cutters who came through the area searching for the aromatic timber. It was also common for farmers to cut the timber as it was a ready source of income during hard times or periods of inactivity.

* Other early accounts describe a road across the lake used by Katanning settlers to cart produce to the goldfields in the 1890s.

* In the early 1900s there were race tracks on it and it was used for picnics.

* During the 1920s and 1930s, although the lake did not fill to overflowing, there were years when it had enough water for swimming and boating.

* A record wet year in 1946 saw the lake fill completely.

* Dumbleyung came into existence just prior to World War I.

* A Coffee Palace was opened in the town in 1910. That same year saw WA Bank open a branch in the town.

* A police barracks was constructed in 1911.

* A school was opened in 1912. The town's first church, a Baptist Church, was consecrated that year.

* By 1915 Dumbleyung was the major rural service town in the region.

* In 1929 a second town hall was constructed by local subscription.

* On New Years Eve 1964 Donald Campbell set the world water speed record when he raced his boat Bluebird across the lake at 444.66 km/h (276.3 mph). This made him the fastest man both on land and on water.

* The Dumbleyung Railway closed in 1982.

There is an excellent local website. Check out http://www.visitdumbleyungshire.com. 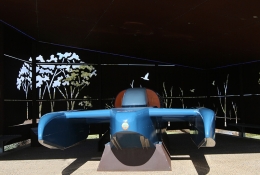 The Bluebird Replica gleams in the sun 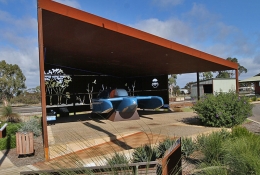 The Bluebird Replica on Absolon Street 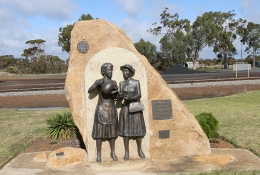 The meeting place of the local Noongar people. 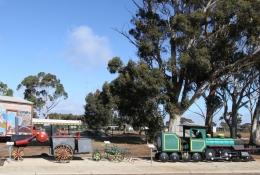 Model train and tractor near the Bluebird exhibition 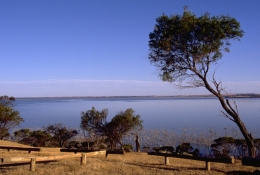 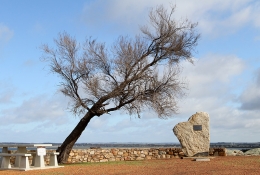 The lookout across Lake Dumbleyung with the Donald Campbell Memorial