Quiet fishing village near where Abel Tasman landed on the coast of Tasmania.

Dunalley, a small fishing village on the Arthur Highway, is located on the narrow isthmus which separates the Forestier and Tasman Peninsulas from rest of Tasmania. The Denison canal, with a swing bridge for road traffic, has been cut between Dunalley Bay and Blackman Bay to allow boats easy access between the two bays. The town is usually nothing more than a brief stopping place en route to Port Arthur. The primary attractions are a good cafe beside the water, the Tasman monument and a large, gracious pub.

Dunalley is located 57 km east of Hobart on the Arthur Highway.

Originally named East Bay Neck, the small settlement was changed to Dunalley in 1839 by an early settler, Captain Benjamin Bayley. The name honoured Henry Prittie, the third Baron Dunalley - a title from County Tipperary in Ireland. Prittie was Bayley's cousin.

Tasman Monuments
In 1923 the Royal Society of Tasmania erected a monument at Tasman Bay near Cape Paul Lamanon, recording that Abel Tasman and his crew became the first Europeans to land on Tasmania. It was near that point that Tasman sent his carpenter, Peter Jacobson, to swim ashore and name the territory Van Diemen's Land after the Governor of Batavia. Neither Tasman nor his carpenter had any idea that they were claiming a small island. The monument is located at Monument Bay and is difficult to access.
The inscription reads: "At this spot the expedition under Abel Jansz Tasman being the first white people to set foot on Tasmanian soil planted the Dutch flag on December 3rd 1642. As a memorial to the posterity and to the inhabitants of the country this stone was erected by the Royal Society of Tasmania 1923."
There is a second, more accessible, Tasman Monument near the town jetty in Dunalley. It is a simple, and very convenient, substitute and is located at the end of  Imlay Street just beyond the Dunalley Waterfront Cafe and Gallery.
The inscription on the monument in Dunalley reads "This monument was erected by the Government of Tasmania in 1942 to commemorate the tercentenary of the discovery of this island in 1642 by Hon. Abel Jans Tasman. Ships boats commanded by pilot major Visscher visited this bay on December 3rd 1642".

The Denison Canal
The Denison Canal is 2.424 km long and was originally dug by hand between 1901 and 1905. It was opened in 1905 and named after Sir William T. Denison, the last Lieutenant-Governor of Van Diemen's Land (1847-1855). A total of 37,500 cubic metres of material was removed.
It provides access between Dunalley Bay and Blackman Bay and has become a popular short cut for returning yachts on the Sydney-Hobart Yacht Race. In 1965 a new swing bridge was installed. Now it is a pleasant place to pause and walk in the park beside the canal.

Spirit Of The Wedgetail
Located next to the Denison Canal is a dramatic sculpture of a wedgetail eagle. It was sculpted by Steven Walker and depicts an eagle landing gracefully on a sandstone rock. It was installed to mark the completion of upgrade works on the Arthur Highway. Stephen Walker is a well-known Tasmanian sculptor who has specialised in portraying the natural and cultural history of the island.

* Prior to the arrival of Europeans the area around Dunalley was occupied by several distinctly different Aboriginal groups who were bound together by speaking the Paredarerme language.

* On 1 December, 1642 Abel Tasman's expedition sighted the east coast of Tasmania near Dunally, made their anchorage north of Visscher Island and on the third day a carpenter swam ashore and planted the Dutch flag.

* In 1772 Marion Dufresne used Tasman's anchorage. At North Bay after a skirmish they shot the first Aborigine killed by Europeans in Australia.

* In 1802 Nicolas Baudin anchored at Maria Island and between 18-27 February, 1802 surveyed North and Blackman Bays.

* In 1815 the explorer James Kelly hauled his small boat across the isthmus thus presaging the building of the canal.

* In 1830 a small military detachment were based at Dunalley before they were moved to Eaglehawk Neck.

* In the 1840s convicts built a railway across the isthmus to haul goods from Dunalley Bay to Blackman Bay.

* In 1842 township blocks were offered for sale.

* In 1877 Dunalley comprised one hotel and ten houses.

* The Denison canal, with a swing bridge for road traffic, has been cut between Dunalley Bay and Blackman Bay to allow boats easy access between the two bays. It was originally hand dug. The project started in 1901  and was completed in 1905.

* In the 1940s a fish cannery was established in the town.

* In 1965 a new hydraulic swing bridge replaced the original bridge.

* Today it is common for Sydney-Hobart yachts returning to Sydney to use the canal as a convenient shortcut.

There is an interesting community website - http://dunalleytasman.org/ - which lists current activities in the district. 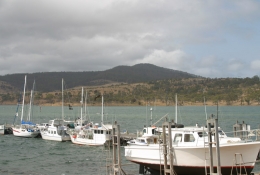 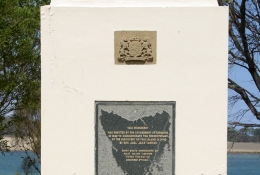 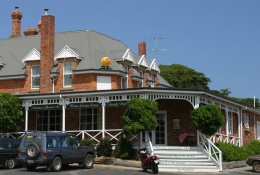 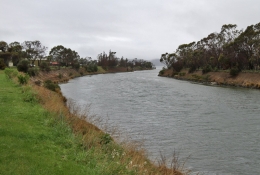 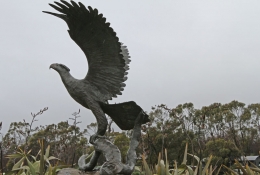 An impressive sculpture - Spirit of the Wedgetail by Steven Walker - beside the Denison Canal. 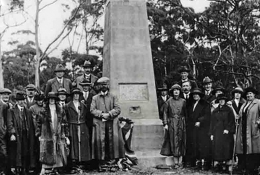 Unveiling of the Tasman Monument, Tasman Bay, 1923. Built by the Royal Society of Tasmania to commemorate Abel Tasman's landing on the Forestier Peninsula in 1642.