Dunedoo is a tiny rural service centre on the crossroads of the Golden and Castlereagh Highways. It is surrounded by fertile plains, gently rolling hills and wide valleys. The local water comes from the Talbragar River. The surrounding district is agricultural and concentrates on wheat, cattle, mixed farming, timber, fat lambs and wool. The commercial centre is effectively a run of shops along Bolaro Street which runs beside the railway line.

Dunedoo is located 354 km north west of Sydney via Mudgee, 97 km north east of Dubbo and 88 km north of Mudgee.

The name 'Dunedoo' probably derived from a Wiradjuri word for 'swans' which are commonly sighted in the lagoons around the town.

Dunedoo Museum
In recent times there has been a commitment by the local community to establishing a museum to record and store the history of the local district. It is currently located in the Multi Purpose Centre at 42 Bolaro Street and is open from 10.00 am - 3.00 pm on Thursdays. It can be opened on request. Check with John (02) 6375 1372 or Ruth (02) 6375 1436.

Leadville
Leadville is 22 km east of Dunedoo and takes its name from the lead (and silver) ores extracted from the Mount Stewart mining operations. The mining ceased in 1898 but, as prices and demand rose, the mine was reopened from 1912-1927, 1932-1937 and 1950-1951. Large amounts of pyrites were also extracted from 1912. The old mines can be seen from the roadside at Leadville. There is an information board concerning the mining operations.

Cobbora
Located 15 km south west of Dunedoo, Cobbora became a postal and coach stop between Mudgee and Mendooran in the 1860s. Two hotels were established and it was declared a town in 1885 when a police station was built. There is an historic cemetery with headstones dating back to 1868.

Fossicking
The area is recognised as a good place to fossick for sapphires, gemstones and gold-bearing conglomerate. There is also a deposit of petrified wood near Cobbora. Ask for details at the Multi Purpose Centre.

A Loo With A View
Australians know Dunedoo because "dunny" is an old fashioned term for toilet ... usually one outside and serviced by sanitary workers. As the town, which is small and slowly fading, wanted to raise its profile it was suggested that it should be known as the town of the "Big Dunny". A huge toilet was proposed but the town was divided and it was never built.

* Prior to European settlement the area was occupied by the Kamilaroi and Wiradjuri peoples.

* In 1823 explorer Allan Cunningham became the first European in the district when he came across Pandora's Pass, the route over the Warrumbungle Range onto the Liverpool Plains.

* The district was surveyed in 1832 and squatters soon followed in search of fresh pasturage.

* The local post office opened in 1876 and was named Dunedoo in 1909. It had previously been known as Bolaro.

* In 2005 the town was incorporated into the Warrumbungle Shire.

The town has its own website. Check out http://dunedoo.org.au/web. 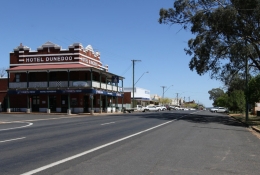 The main street of Dunedoo. 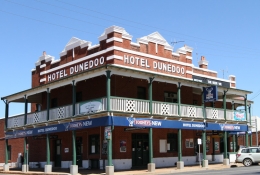 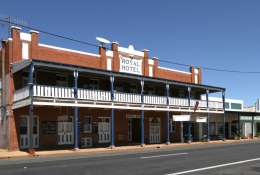 The Royal Hotel now a B&B. 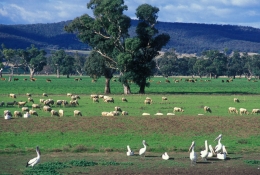 Rich farmland with sheep and cattle (and pelicans) around Dunedoo