Charming town recognised as the Southern Gateway to the Grampians.

You know you are at the southern tip of the Grampian Ranges when, driving west on the Glenelg Highway, you notice the rugged slopes of Mt Abrupt (825 m) and Mt Sturgeon (448 m) rising dramatically from the surrounding plains. These two rocky outcrops were both named by Major Mitchell who was the first European in the area.  Dunkeld is a small rural town located at the foot of the Grampians and at the southern tip of Grampians National Park. Its importance lies in its access to some of the major attractions in the area - walk to the top of Mount Sturgeon, explore Mount Piccaninny, climb to the top of Mount Abrupt. This is beautiful countryside which has inspired painters for over a century.

Dunkeld is located at the foot of the Grampians 270 km west of Melbourne via the Western Freeway and Glenelg Highway.

The town was originally known as Mount Sturgeon but the early settlers, many of whom were from Scotland, renamed it Dunkeld after a small Scottish town which can be correctly translated from Gaelic as the "fort of the Caledonians".

Dunkeld Historical Museum
Dunkeld Historical Museum is located in an old bluestone Presbyterian church (1865) in Templeton Street. The Culture Victoria website (http://www.cv.vic.gov.au/organisations/dunkeld-district-historical-museum-inc) notes of the collection "This is a social history collection of the Dunkeld District from the exploration in the 1830's by Major Mitchell, to the present day. It covers a range of industries, tools and memorabilia. It also has a collection relating to individuals and events from both world wars. We hold a registered collection of aboriginal artefacts and the related history for this. It is displayed in the original church in Dunkeld which was the Presbyterian church but used by all denominations in the 1860's and a large gallery which extended the building after the museum was established. There is a heritage cottage garden at the front which is a memorial to the original museum member who established it. This collection is significant to the local area and the activities which have been undertaken in the Western District over the last 180 years or so. There are individual items of great significance to the community, or having belonged to individuals in the community who have become well known beyond the immediate area. Our aboriginal collection is registered with the Aboriginal Heritage Council and was one of the first in the state to be registered. We also have a very large photographic collection with several thousand photos and even more negatives which have not been printed. There is also a large collection which is related to the exploration of South West Victoria and Major Mitchell." It is open Sundays and public holidays from 1.00 pm to 5.00 pm. Tel: (03) 5577 2287.

Royal Mail Hotel
For foodies the Royal Mail Hotel, with its views across the foothills to Mount Sturgeon, is a magnet. In recent times it has been awarded two hats (2015, 2016) by The Age's Good Food Guide and the head chef, Robin Wickens, is known for his perfectly cooked local produce and the wide range of his international cellar. The restaurant serves an eight course degustation menu which, at the time of writing, included such delights as abalone, snails and accompanying wines from Spain, France and Italy as well as local delights. Check out http://www.royalmail.com.au for the menu and prices.

Walking in the Grampians
There are eight walks in the area. Check out http://www.fgreed.com.au/Portals/0/Directions%20to%20Mt%20Sturgeon.pdf for an excellent map which shows:

2. Peregrine Trail - 8 km return, 3-3.5 hours, Medium-Hard. Starts at the ancient gum tree at the place where Salt Creek meets the Wannon River and then heads towards the entrance to the Grampians National Park at the base of Mount Sturgeon and makes its way around the base of the mountain before joining up with the River Trail.

4. Mt Sturgeon Trail - 7 km return, 2.5-3 hours, Hard. Located 3 km north of town, at the junction of Victoria Valley Road and Grampians Tourist Road is the Mount Sturgeon Car Park which is the start of a walking track to the top of Mount Sturgeon. The track crosses a small footbridge and ascends slowly through open forest of brown stringybark and grass trees. The track steepens and then emerges from the forest into tall heathland. A prominent rock cairn to the left offers views of Mt Abrupt and the smaller Mt Picaninny to the north-east. The track proceeds past a rock shelter on the left to the open summit (448 m above sea-level). There are swamp wallabies along the trail and in spring wildflowers abound.

5. Mt Picaninny Trail - 2.4 km return, 1-1.5 hrs - Medium. Located 4.5 km from Dunkeld, along the Grampians Tourist Road (beyond the Mt Sturgeon Car Park), is a turnoff which leads to the Picaninny parking area and the Dunkeld town reservoir. There is an easy-going walk to the peak of Mt Piccaninny (422 m above sea-level) which offers views of Dunkeld to the south, Mt Sturgeon to the south-west and Mt Abrupt to the north-east. It is possible to continue south and join up with the Mt Sturgeon Trail.

6. Mt Abrupt Trail - 6.5 km return, 2.5-3 hours, Hard. Located 8 km north of Dunkeld, along the Grampians Tourist Road, is the Mt Abrupt Car Park. A steep and difficult track to the summit of Mt Abrupt leads through thick forest then ascends steeply to a rocky ridge north of Mt Abrupt. The track then follows the ridge southwards. Watch out for small rock cairns and red arrows on boulders. A last steep ascent ends at the boulder-strewn summit (825 m) which provides some of the finest panoramic views in the district.

7. Royal Mail Hotel Boardwalk, 1 km return, 15 mins, Easy. This simple walk runs along Salt Creek and along Adams Street on boardwalks through the swampy country beside the creek. It is common to see wallabies in the early morning.

8. Dunkeld Arboretum Walk - 2 km return, 40 mins, Easy. Located on Old Ararat Road the Dunkeld Arboretum, which covers over 18 ha, was a community project based on the old Water Reserve. There are over 700 trees in the reserve, including what is reputedly the second-largest collection of oaks in Australia. As well there is a sandstone meditative labyrinth, the Water Reserve has become a lake, and there is an Old Sawmill as well as picnic facilities.

* Prior to the arrival of Europeans the area was inhabited by the Chapwurrung Aboriginal people.

* In 1836 Major Thomas Mitchell passed through the area. He named both Mt Abrupt (825 m) and Mt Sturgeon (448 m) and camped for three days at the foot of Mt Sturgeon during his Australia Felix expedition.

* The first pastoralists took up properties in the late 1830s.

* The Robertson's Woolpack Hotel, the first hotel in the district, was opened in 1845.

* By 1849 Alexander Templeton had built a general store in the town.

* A small township developed which was initially known as Mt Sturgeon. In 1852 a Post Office was established with the name Mt Sturgeon.

* A Presbyterian Church was built in 1865. It was used by all denominations.

* In 1877 the railway between Hamilton and Ararat reached the town.

* In 1928 a War Memorial was erected to commemorate the locals who fought in World War I.

* In 1944 the town was ravaged by a bush fire so severe that one-third of the buildings were destroyed.

* In 1954 Memorial Gates were established in the town's main park.

There is an official website. Check out http://www.visitvictoria.com/Regions/Grampians/Destinations/Dunkeld.aspx for information about vineyards, eating and accommodation in the local area. 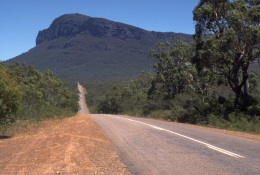 Mt Abrupt - from the road 11 km from Dunkeld. 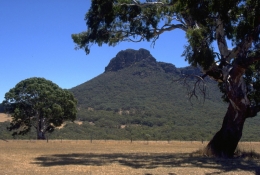 Mt Sturgeon stands above the town. 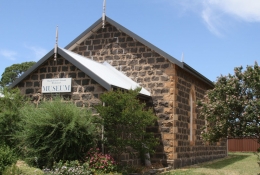 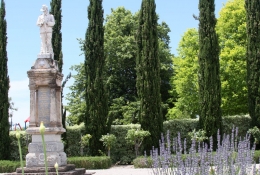 The War Memorial in the main street of Dunkeld.