Town at the northern entrance to Leeuwin Naturaliste National Park.

Dunsborough is a pleasant, upmarket resort town at the northern entrance to the Leeuwin Naturaliste National Park. The area's appeal is based on its dramatic and beautiful coastal scenery, its coastal bush walks, wildflower displays and the excellent whale watching between September and December.

Dunsborough is located 247 km south of Perth via the Kwinana and Busselton Freeway. It is 24 km east of Busselton.

There is no certainty about how Dunsborough got its name although the popular theory is that it was named after a whaler and sealer named Dunn. He was an American adventurer who settled in the area in the winter months. The district was originally known as Dunnsboro and sometimes Dunnsborough. In the 1940s the second 'n' was dropped and it became Dunsborough.

Cape Naturaliste's attractions include Lookout Rock near Castle Bay which offers superb views over Geographe Bay. It was used by the whalers for sighting whales swimming up the coast. There is Curtis Bay where a sailor named Anthony Curtis used to load cattle onto his ship by swimming them out and pulling them aboard by their horns.

Further along the coast are Castle Bay and Castle Rock which were once used as a resting place for the American whalers who worked in the Southern Ocean. The whalers, having caught and killed the whales, would bring them ashore at Castle Bay where they would be processed for oil. The Castle Bay Whaling Company operated from 1845-72. There is a cairn which marks the original site. Further up the coast are the popular beaches at Meelup and Eagle Bay. The highlights of any visit to Cape Naturaliste are visits to Sugarloaf Rock (clearly signposted to the west of the cape) and Shelley Beach (to the east). Sugarloaf Rock is a dramatic rock just off the coast in an area which is rich with wildflowers. Shelley Beach is part of Bunkers Bay which, being on the eastern side of the cape, is protected  from the full force of the Indian Ocean.

Cape Naturaliste is also home to several rare species of wildflower including the Naturaliste Nancy, Dunsborough Spider Orchid, Cape Spider Orchid and Meelup Mallee. All of which are in bloom during the spring months

Between September and December it is also an ideal whale spotting location with southern right, humpback and blue whales in Geographe Bay. They can commonly be seen from Cape Naturaliste’s purpose built whale watching platform

There is a Cape to Cape Track (it was officially opened in 2001) which runs from Cape Naturaliste to Cape Leeuwin. If you are planning to walk the coast there is a book, The Cape to Cape Track Guidebook. Check out http://www.capetocape.8m.com. There is also a dedicated website with detailed information about the track. Check out http://www.capetocapetrack.com.au/pages.asp?code=10. For more information check http://parks.dpaw.wa.gov.au/park/leeuwin-naturaliste. Of particular interest to walkers is the  'Access for More' section of the Cape to Cape Track which runs between the Cape Naturaliste Lighthouse and Sugarloaf Rock. It is suitable for wheelchairs. It is accessible at either end by vehicle. Seats are provided along the route. This is a world class trail that incorporates more than a kilometre of timber boardwalk. Check http://parks.dpaw.wa.gov.au/park/leeuwin-naturaliste for more details.

Cape Naturaliste Lighthouse
By the time it has been completed in 1904, more than twelve ships had been wrecked by the dangerous reefs and strong currents which characterised Cape Naturaliste. There had been other, simpler devices to indicate where the shore was but in 1903, on a 100 m high bluff over Geographe Bay, the lighthouse was constructed. It was built from local limestone which was quarried a couple of kilometres from the site. Bullock wagons brought the material, including the lens and a turntable weighing 12.5 tons, to Eagle Bay. The stairs inside the lighthouse were made from local wooden teak blocks. The light, powered by an incandescent vapourised kerosene lamp, was lit in 1904. Twenty years later it was upgraded to 1.2 million candles and it was automated in 1978. It has a range of 25 nautical miles, is 123 m above sea level, and currently has an intensity of 930,000 candela.

Ngilgi Cave
Ngilgi Cave is located at 76 Yallingup Caves Road, north of Yallingup. The cave was discovered in 1899 by Edward Dawson who stumbled upon it while searching for missing horses. The following year he conducted visitors through the cave. Dawson continued to take tour groups through the cave until he retired in 1937. The cave takes its name from an Aboriginal legend which recounts a battle between a good spirit (Ngilgi) and an evil spirit (Wolgine). The cave has an impressive array of stalactites, stalagmites, helictites and shawl formations. There is an interpretative area recording Ngilgi Cave's history as well as a cafe, playground and barbecue facilities. It is open from 9.00 am - 5.00 pm (first tour at 9.30 am, last entry at 4.00pm). Check out https://www.margaretriver.com/members/ngilgi-cave for times and tours. The website points out "Extensive boardwalks lead you through the impressive chambers of this underground wonderland, with the junior explorer's tunnel providing fun for little ones. Along the way, lighting illuminates hidden marvels and signage allows you to learn more about the remarkable variety of calcite crystal decorations. Relish the rare opportunity to handle some cave crystals at the touch table - where a guide is available to answer all your burning questions. With a constant temperature of 20°C, the cave is an ideal place to visit year round."

HMAS Swan Dive Wreck
It is possible to dive on the HMAS Swan Dive Wreck which is a River Class Frigate Destroyer Escort, built in 1967, decommissioned in 1996, andsunk in 30 metres of water off Meelup Beach. The Geographe Bay Artificial Reef Society have converted the frigate into an artificial reef and breeding ground for coral, fish and other marine life. The HMAS Swan can be visited by divers almost 10 months of the year.

* Prior to the arrival of Europeans the area around Dunsborough had been occupied by the South West Boojarah of the Wardandi Aboriginal language group.

* In March, 1622 Dutch sailors sighted the south western tip of Australia and named it 't Landt van de Leeuwin' meaning the land of the lioness. They were familiar with the coastline north from Cape Leeuwin.

*On 30 May 1801, the French explorer Nicholas Baudin sailed up the coast rounded Cape Naturaliste and anchored in Geographe Bay. He named the two locations after his vessels the Geographe and the Naturaliste.

* The area was settled by Europeans in the 1830s with whalers setting up whaling stations along the coast and pastoralists - the settlers who moved north from Augusta - taking up land around the Vasse River and south to the Dunsborough district.

* By 1845 the Castle Rock Whaling Station was operating north of the present location of Dunsborough.

* The town was proclaimed in 1877 but it remained nothing more than a few shacks until the early 1900s.

* The town didn't get its first bakery until 1930. Prior to that supplies arrived twice yearly when a representative from Fremantle Union Stores passed through the area with his sulky laden with goods.

The Geographe Bay Tourism Association have a good and detailed local website at http://www.geographebay.com/ 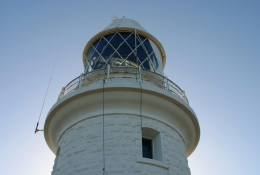 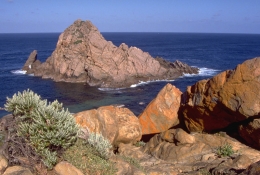 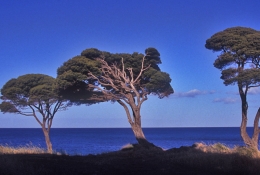