Holiday village at northern edge of Murramurrang National Park with kangaroos on the beach.

The three tiny townships of Durras North, Durras Lake and Durras South are surrounded by the Murramarang National Park and edged by quiet beaches lapped by the Tasman Sea. This is a holiday destination which was historically spearheaded by Bruce Campbell who established the Murramarang Beachfront Holiday Resort as a camping, caravan and holiday cottage resort. It had the compelling attraction of wild kangaroos which wandered around the site and ate the grasses on the edge of the beaches. But the area was more than the kangaroos. It was geologically fascinating and the fauna and flora in the National Park were rich and largely undisturbed. The main appeal of the area is that there has been little tourist development which means it is still an area of great natural beauty which has been largely undisturbed, unlike the beaches which lie to the south of Batemans Bay.

Durras is located 276 km south of Sydney via the Princes Highway and Durras Road. It is only 17 km north of Batemans Bay.

No one is sure how Durras got its name. It appears that it was in use as early as 1840 when the first permanent European settlers arrived in the area.

Murramarang National Park and its Walks
Murramarang National Park is never more than 2 km wide but it  stretches for 44 km along the coastline from Kioloa to Batemans Bay. Dominated by beaches, cliffs and headlands it also has rock stacks, offshore islands, fossil-bearing rocks and impressive rock platforms.
The park is rich in both fauna and flora with eastern grey kangaroos, swamp wallabies, red-necked wallabies, parrots, finches, honeyeaters, eagles, hawks, terns, thrushes, parrots, oyster catchers, wrens, muttonbirds, albatrosses and fantails. It is one of the highlights of the park that kangaroos feed on the edges of the beaches.
The flora is predominantly wet eucalypt forest comprising spotted gums with an understorey of burrawangs leading to banksia, she-oaks and heath on the beaches and headlands. There are small areas of rainforest in sheltered gullies, particularly around Durras Mountain. There are numerous walking tracks through the National Park. They are all described in detail at https://www.nationalparks.nsw.gov.au/visit-a-park/parks/murramarang-national-park.

Wasp Head
To reach Wasp Head, one of the highlights of Murramarang National Park, simply follow the signs from South Durras. This is one of the best walks in the area with coastal views, golden beaches and tracks to the cliffs and bays of Wasp Head. Significantly Wasp Head is the southernmost point of the Sydney Basin sandstone. The geology of the area is fully explained at http://www.eurobodalla.com.au/wasp-head-geological-site.
The tracks around Wasp Head lead to areas where shellfish fossils abound. There are rock pools, an igneous dyke and a one metre fault plane which runs right up the coast. At Mill Point there are the remains of a timber mill which was vital for the local economy. Its rusted old boiler still lies in the grass. For more information check out http://www.nationalparks.nsw.gov.au/Murramarang-National-Park/Wasp-Head-Walk/walking

Beaches in Murramarang National Park
There is an excellent walk south from Murramarang Beachfront Nature Resort which passes a series of isolated beaches in that section of Murramarang National Park north of Batemans Bay. These include Emily Miller, Dark, Myrtle, Richmond, Oaky and Honeysuckle Beaches. Each has its own unique appeal. Dark Beach was named because of the many small black shingles. Honeysuckle Bay is characterised by distinctive spotted gums with stunted trunks and horizontal branches, the result of deficient nutrients. At the southern end of the walk -  North Head has very large rock pools which are suitable for snorkelling.

Depot and Pebbly Beach
To the north of South Durras, and accessed by Mount Agony Road and North Durras Road are Depot Beach and Pebbly Beach. At one time the noted Australian historian, Manning Clarke, had a holiday home at Depot Beach. Today these two beaches are popular with holidaymakers wanting quiet retreats. Pebbly is known for its sheltered position and the many wallabies which feed and lounge at the edge of beach. Historically it was important to the local timber industry. The surrounding forest was logged and the timber carted by bullock teams to a sawmill near the beach. The sawn timber was then transported along a tram line to the northern section of the beach where it was deposited on the rocks. A ship was then moored nearby and the timber winched aboard. For more information check out http://www.nationalparks.nsw.gov.au/Murramarang-National-Park/Pebbly-Beach-campground/camping

First Nations Sites in Murramarang
Durras North
Durras North has a midden in a sea cave near Point Upright which was discovered and excavated in the early and mid-1960s.The excavation is described in Josephine Flood’s Archaeology of the Dreamtime: “Further south on the New South Wales coast, the small sea cave of Durras North, which overlooks a large ocean beach, was excavated by Lampert. The deposit only spanned the last 500 years and revealed a number of surprises. There were almost no stone tools. The only numerous artefacts were fish-hooks and bone points, pointed at one or both ends and made out of bird bone. The deposit was full of bird bones, particularly of the mutton bird. These birds migrate down the coast each year and would have been caught after they collapsed exhausted at sea and were swept ashore. The mutton bird collectors also consumed fish, shellfish and Macrozamia nuts, and doubtless many other foods, which were eaten away from the cave or have not survived in the midden. The southerly aspect of the beach at Durras makes it an ideal location for the collection of flotsam, and we can imagine these prehistoric beachcombers sitting in their cave in October and November, the best months for mutton bird casualties, looking out across the sand to the rolling surf, which might bring them their dinner”.

Murramarang Aboriginal Area
Murramarang Aboriginal Area is a 2 km easy walk which should take around 90 minutes. Described on the National Parks website as "Give yourself a couple of hours to immerse yourself in the surroundings on the 2km Murramarang Aboriginal Area walk along the coastline. Interpretive signs offer insight into some of the most culturally significant Aboriginal sites along the track. The beginning of the walk is along a sand track from the car park, and the undeveloped location is very evocative, making it easier to imagine how the landscape would have looked thousands of years ago when large numbers of Aboriginal people lived here." Check out http://www.nationalparks.nsw.gov.au/murramarang-aboriginal-area/murramarang-aboriginal-area-walk/walking for more details and a description of how to reach the car park which is the starting point.

Bushwalks in the Durras Area
Beyond the walks described in the Murramarang National Park there are also a number of interesting walks in the area including:

Durras Discovery Trail
The Murramarang Nature Resort website describes this walk as "The Durras Discovery Trail features three types of forest, a viewing tower and interpretation signs.
The trail is an easy 1.5 kilometre loop route that takes approximately 45 minutes. The route runs along the northern perimeter of Durras Lake through tall eucalypt (wet spotted gum and blue gum) forest, then climbs into dry blackbutt forest, and then descends into a rainforest gully. Along the way are bush seats, foot bridges and some 300 metres of ironbark boardwalks. To access the trail drive to the Princes Highway and turn east off the highway at the North Durras/Depot Beach turnoff sign into Mt Agony Road. Follow the road to North Durras and then turn right into gravel-laden Lake Road (clearly signposted) and continue down to the car park where the trail commences. Another way to experience the walk is part of a guided tour that features kayaking on Durras Lake."

Eucalypt Trail
The aim of the Eucalypt Trail is to help people identify eleven different species of eucalypt which are common on the South Coast. If you are attentive you will see Blackbutt, Sydney Blue Gum, Grey Ironbark, Monkey Gum, Rough Barked Apple, Sydney Peppermint, Red Bloodwood, Spotted Gum, Woollybutt, White Stringy Bark, and Bangalay. The trail is located in the Kioloa Rest Area, is 500 m long, takes around 20 minutes and is an easy walk. The site is clearly signposted and is off the Princes Highway approximately 7 km north of the Durras Road turnoff.  It has wooden steps and signs which describe the various eucalypt species.

Fishing in the Region
Durras Lake is well known as an excellent fishing destination. The lake has bream, whiting, flathead and, in season, prawns. There are two boat-launching ramps in the area. One is located at Durras Lake and one at Beagle Bay in South Durras.

* Prior to European settlement First Nations people from the Yuin language group lived in the area.

* The first European to sight the bay was Captain James Cook on April 22, 1770 as he sailed up the coast.

* The first Europeans to pass through the area were the survivors from the wreck of the Sydney Cove who reached the banks of the Clyde River on 16 April 1797.  Nine of them died. Only three passed through Durras and reached Sydney alive.

* Hearing the reports of the survivors, George Bass sailed south and on 14 December 1797, he entered Batemans Bay.

* In 1828 the area was surveyed by Thomas Florance and Robert Hoddle.

* In 1840 land was granted to John Larmer. The name Durras was being used at the time.

* In 1870 a timber mill was established at Wasp Head around this time and it continued to operate until 1929.

* In 1879 the 29 ton ketch, Emily Miller, became the only vessel to have been shipwrecked near Durras when it ran aground near Wasp Inlet. The small crew reached the shore without loss of life.

* In 1937 the land now known as South Durras was subdivided and sold as housing blocks.

* In 1960 the town was connected to the electricity.

* In 2019 the area was decimated by bushfires during the pre-Christmas fires through the area. 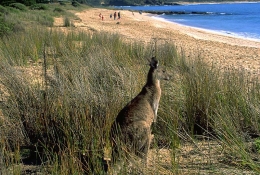 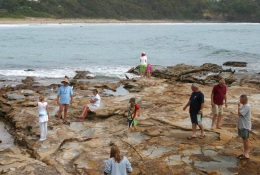 Holidaymakers on the rock platform at South Durras 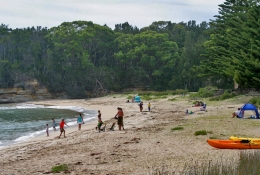 Mill Beach in front of Murramarang Resort on the edge of the National Park. 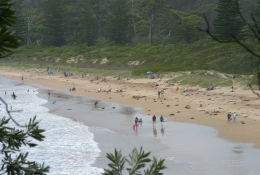 Summertime on the beach at Durras