Historically Eaglehawk Neck was a fascinating attempt to contain escaping convicts by creating a natural prison. It joins the Tasman Peninsula to the Forestier Peninsula by a narrow sandbar which is less than 100 m wide and, as such, was capable of being turned into a kind of natural prison gates by placing savage dogs across the sandbar to dissuade convicts attempting to cross. It is now a series of tiny holiday retreats around a series of remarkable natural wonders. Eaglehawk Neck itself is a tie bar made of sand carried by currents and waves from the floors of Pirate's Bay to the east and Norfolk Bay to the west. For something that is nothing more than a narrow bar of sand the "Neck" can hold the visitors attention with a number of historic and natural attractions including the Tessellated Pavement, the Devil's Kitchen and Tasman's Arch (each a remarkable geological formation) and the Dogline, the memorial to the bushranger Martin Cash and the Officers Quarters which are now a museum.

Eaglehawk Neck is located 77 km south-east of Hobart on the Arthur Highway.

Eaglehawk Neck is a combination of the Eaglehawks which are found in the area and the geographical feature - 'a neck' - which, in this case is a narrow strip of land less than 100 m wide. 'Terra Linna' was the aboriginal name for Eaglehawk Neck.

The Tessellated Pavement
Located on the shoreline in front of the Lufra Hotel and Apartments, the tessellated pavement is an unusual geological formation which creates the impression that the rock platform has been covered with giant tiles. There is a sign near the pavement which explains: "It is called the tessellated pavement. The pavement appears tessellated (it's tiled) because the rocks forming it were fractured by earth movements. The fractures are in three sets, one set runs almost north, another east north east, and a third discontinuous set north north west. These last two sets produce the tiled appearance. The flatness of the pavement is due to initial erosion by waves carrying sand and gravel and nearer to the cliff, to chemical action by sea water. The rocks which absorb sea water during high tide dry out during low tide causing salt crystals to grow and disintegrate the rocks - a process which produces shallow basins." This information was written by the Geology Department of the University of Tasmania. On the edge of the platform are forests of huge elkhorn kelp which sway with the tide and the waves.

The Memorial to Martin Cash
At the car park opposite the Lufra Hotel and Apartments the most famous escape across the Neck is recalled on a small monument which reads: "To mark the centenary of the death of Martin Cash - Gentleman Bushranger 26th August 1877 and his escape from Port Arthur across the Neck in 1843 with two companions, Cavanagh and Jones. 27 August 1977". Cash, who was not related to the tennis player Pat Cash, was Tasmania's most famous bushranger.

Martin Cash was born at Enniscorthy, County Wexford, Ireland in 1808. When he was 19 he was convicted of house breaking (he always claimed it was because he had shot his mistress's lover) and sentenced to seven years' transportation. He arrived in Sydney in 1828 and shortly afterwards was assigned to a farmer in the Hunter Valley. He served out his time, was granted his ticket-of-leave and started working as a stockman.

In 1837 he was caught cattle duffing and before he could be apprehended had fled to Van Diemen's Land where, in 1839, he was convicted of larceny and sentenced to seven years' hard labour. He escaped three times in the next three years. He was sent to Port Arthur.

It was at Port Arthur that he met up with two other convicts, Lawrence Kavenagh and George Jones, and managed to escape across Eaglehawk Neck by hiding for three days and then swimming far enough out to sea to not alert the guard dogs.

The trio began bushranging along the road between Hobart and Launceston. They rarely used violence they gained a reputation as 'gentlemen bushrangers'. Cash was finally recaptured in Hobart in 1843 but he was saved from the gallows by his reputation for 'gentlemanly' conduct. He was sentenced to transportation for life and sent to Norfolk Island for ten years. In March, 1854 he married another Irish convict, Mary Bennett, and later that year he was granted a ticket-of-leave and returned to Tasmania. For the next twenty years he lived quietly working as a farmer and as the overseer at Hobart's Botanic Gardens. He died at his property near Glenorchy on 27, August 1877. For more information check out http://www.sl.nsw.gov.au/events/exhibitions/2006/ontherun/docs/ontherun_guide.pdf.

Eaglehawk Neck Historic Site - The Dogline
On the actual "Neck" at the northern end just beyond the Tessellated Pavement is the Eaglehawk Neck Historic Site which comprises the sculpture of the infamous dogline (it was created by Ruth Waterhouse and Curtis Hore in 1999)  which ran across the Neck and an interesting (and free) museum located in the old Officers' Quarters, an unassuming building near the car park.

Officers' Quarters Museum
The Officers' Quarters, which was erected in 1832, is probably the oldest timber military building in Australia. The building has been restored so that it now looks like a rather unimpressive wooden shed. Inside it a museum and interpretation centre with excellent panels covering the Dogline, an overview of all the penal institutions on the the Tasman Peninsula, an interesting explanation of the way the semaphore worked, a record of the savage treatment of the local Aborigines and the way the "neck" worked as a natural prison. It is an ideal starting point for anyone interested in the convict history of the entire area.

The Dogline
"These out of the way pretenders to dogship were actually rationed and borne in the government's books and rejoiced in such soubriquets as Caesar, Pompey, Ajax, Achilles, Ugly Mug, Jowler, Tear'em, Muzzle'em ... There were the black, the white, the brindle, the grey and the grisly, the rough and the smooth, the crop-eared and lop-eared, the gaunt and the grim. Every four-footed black-fanged individual among them would have taken first prize in his own class for ugliness and ferocity at any show." wrote Harden S. Melville in 1837.

These dogs were part of the Dogline, a line of eighteen dogs which stretched across the narrow isthmus at Eaglehawk Neck and was designed to stop convicts escaping from Port Arthur and the other convict settlements on the Tasman Peninsula.

It was Lieutenant John Peyton Jones, from the 63rd Regiment, who devised the "natural" prison wall. He later wrote "It occurred to me that the only way to prevent escape of prisoners from Port Arthur in consequence of the noise occasioned by the continual roar of the sea breaking on the beach and the peculiar formation of the land which rendered sentries comparatively useless, was to establish a line of lamps and dogs."

So, in 1832, a "cutting was dug through the full width of the dunes to form a broad passage from one side of the Neck to the other. The floor of the cutting was covered with white cockle shells which, with the light from the lamps, illuminated the site at night. Initially nine dogs were chained along the length of the cutting, creating an inpenetrable, ferocious blockade. Anyone approaching Eaglehawk Neck by land or water would activate the alarm - a cordon of vicious, barking mongrels ... The system worked. Throughout its 45 years [it was not abandoned until Port Arthur closed down in 1877] of operation, only a few prisoners succeeded in passing through the barrier."

The system was greatly assisted by a series of 22 semaphores. Once a convict escaped the soldiers on duty at Eaglehawk Neck could be alerted in a matter of minutes.

There were two attempted escapes (one successful) that became famous.

One report recalls: "Only now and then did a touch of macabre comedy come to Eaglehawk. A convict named William Hunt, listed on the records as a former strolling actor, attempted to escape in the skin of a kangaroo. Two guards on picket duty saw what seemed to be a 'boomer', a big old man kangaroo, hopping determinedly across the Neck and heading for the scrubland on Forestier's Peninsula. One for the pot, they reckoned, but as they raised their muskets the kangaroo stopped in its tracks and in the impeccable accents of Drury Lane called out, 'Don't shoot! It's only me - Billy Hunt!''

Another, and probably the most successful, was Martin Cash who became a bushranger. Across the road from the Lufra Hotel and Apartments a small monument reads: "To mark the centenary of the death of Martin Cash - Gentleman Bushranger 26th August 1877 and his escape from Port Arthur across the Neck in 1843 with two companions, Cavanagh and Jones. 27 August 1977".

Doo Town
Beyond Eaglehawk Neck, on the way to Tasman's Arch and the Devil's Kitchen, is the holiday village - it comprises mostly huts, shacks and holiday homes - of Doo Town which is worthy of attention only because the locals, with a fine sense of wit, have named their houses often with clever puns on "Doo". Thus there is a Doodle Doo, Doo Nothing, Love Me Doo, Doo Us, Doo Me, Doo Nix, Wee Doo, Xanadu, This'll Doo Me, Rum Doo and, the house which reputedly started the fashion, Doo Little - an appropriate name for a lazy, holiday home.

Tasman's Arch
Tasman's Arch is a natural arch which was produced in the sandstone cliff by waves action. It is an enlarged tunnel which runs from the coast along a zone of closely spaced cracks and extends inland to a zone which is perpendicular to the first. The roof at the end of the tunnel has collapsed forming the arch.

Devil's Kitchen
The Devil's Kitchen is a gash in the coastline which has been formed by a similar process to Tasman's Arch. The sandstone rocks are permian in age (about 250 million years old) and were deposited as silt and sand on the floor of a shallow sea. Geologists believe that ice probably floated on the surface and that the pebbles caught in the ice floes dropped into the silt and sand as the ice melted.

The Blowhole
Nearby, and part of the same geology as the Tasman's Arch and Devil's Kitchen, is a blowhole which is located near the Pirates Bay Wharf.

* Prior to European settlement the area around Eaglehawk Neck was occupied by people from the Nuenonne Aboriginal language group.

* In the 1820s George Meredith, a landowner at Swansea anchored near the Blowhole and was captured by some escaped convicts (they had lost their way) and consequently the bay was named Pirates Bay

* In 1831 plans for a military station on Eaglehawk Neck were drawn up.

* In 1832 the infamous Dogline was created to prevent convicts escaping across the isthmus.

* In 1835 the hut housing the Officer in Charge (now the Museum) was turned into a storeroom.

* By 1837 the community at Eaglehawk Neck included 8 married officers and 30 children.

* In 1843 Martin Cash became the most famous convict to escape across the Dogline.

* In 1875 the first Eaglehawk Neck post office was opened.

* in 1877 the Dogline was closed down when Port Arthur was finally abandoned.

* In 1991 the historic site was acquired by the Tasmanian Government.

There is a useful local website. Check out http://www.eaglehawkneck.com/. 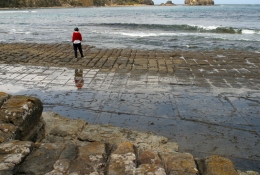 The tessellated pavement at Eaglehawk Neck 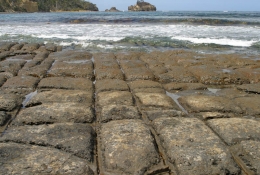 A close up of the tessellated pavement 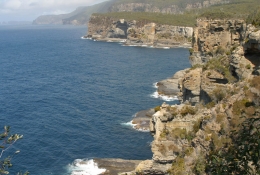 The rugged coastline to the south of Eaglehawk Neck. 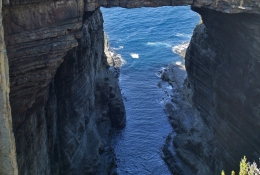 Tasman's Arch carved out of the Permian sandstone. 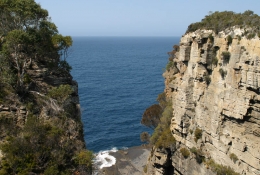 The Devil's Kitchen, a 60 m deep crevasse in the Permian sandstone. 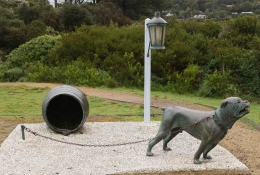 A sculpture by Ruth Waterhouse and Curtis Hore recalls the infamous "Dogline" designed to deter convicts attempting to escape from Port Arthur. 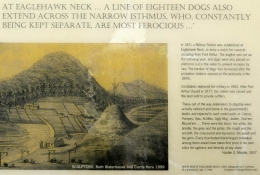 The sign describing the infamous Dogline on Eaglehawk Neck.