Driving north-west from the centre of Bendigo the visitor passes through the suburban sprawl of a large, rural city. It is hard to tell exactly when Bendigo stops and Eaglehawk starts. It is now recognised as a part of Greater Bendigo but, as it proudly asserts, it was declared an independent borough in 1862 and remained so until the early 1990s. That extended period of independence means that the residents of Eaglehawk see themselves as different - they are people with a proud gold mining past and a strong working-class sensibility.

It is claimed that Joseph Crook, who found a nugget while searching for some horses, started the Eaglehawk goldrush in 1852. Local myth has it that Crook noticed an eaglehawk flying near his claim and named it accordingly

Brassey Square and the Town Hall
The civic heart of old Eaglehawk is clustered around the opulent town hall in Brassey Square at the corner of High Street, Sailors Gully Road and Peg Leg Road (which is the start of the Loddon Valley Highway). It was built in 1901 on the site of an earlier town hall which had stood on the location since 1865. The Victorian Heritage Database notes: "The present building replaced this earlier building and was opened on 14 August 1901. The architects were the Melbourne firm of Wilkinson and Permewan. As a much larger and more sumptuous building of brick and stone featuring a central clock tower, the new hall reflected prevailing architectural fashion and was a remarkable investment for a town consisting predominantly of poor mining families. The condition of the town hall is substantially as built. The design is almost identical to the Castlemaine Town Hall." See  https://vhd.heritagecouncil.vic.gov.au/places/2847 for more detailed information.
It is fronted by historic cannons which were built in 1859 and 1861 at Newcastle in England and probably used at a fort on Port Phillip Bay until 1901. They were originally from the HMVS Nelson and were associated with one of the earliest ships to constitute the Victorian Navy. The Nelson when completed in 1814 was a timber sailing vessel and the largest warship in the British Navy. An eaglehawk motif can be seen in one of the building's stained-glass windows.

Mechanics Institute
The town hall is flanked by the former post office (1874) and mechanics' institute (1883). The local Mechanics Institute was formed in 1868 when members of the Eaglehawk community established a Public Library Committee which led to a reading room in the Council's chambers. The site of the library was given to the committee in 1877 but it was not until 1883 that a tender was furnished to the design of H.E. Tolhurst. See  https://vhd.heritagecouncil.vic.gov.au/places/2847 for more detailed information.

Eaglehawk Court House Museum
Located at 16 Sailors Gully Road, behind the town hall, is the small and unusual red-brick courthouse (1869) which, according to the Victorian Heritage Database, was "designed by Public Works Department architects H. A. Williams and Peter Kerr. Kerr, who also designed the Post Office in the same precinct, is given credit for the detailing. The Victorian Free Classical design incorporates along with Romanesque circular gable vent and raking arches motif, the triple arch motif which was very popular in public buildings of this period. The Eaglehawk Courthouse is unusual amongst courthouses in its adoption of side entered porch under the main gable roof, rather than veranda or open colonnade. The red brick building features extensive cream brick detailing, including banding, corbelled cream mouldings, striated arches and reveals, panels in the gable end and diaper patterns on the chimneys." For more information check out https://vhd.heritagecouncil.vic.gov.au/places/5187. The Court House houses a display of material relating to local history, particularly photographs, and conducts family history research. It is open Sundays from 1.00 pm to 4.00 pm or by appointment.

Log Lock-Up
Located beside the court house is the old log lock-up which was built around 1855 to serve as temporary accommodation for prisoners and those awaiting trial. The Victorian Heritage Database notes: "The 4.4m by 8.4m log lockup is typical of the log cabin construction log lockups built during the gold rushes. It features three timber lined cells and secure entry vestibule. It is constructed of bush hardwood logs, with logs in the cell walls transverse poles under the floor and above the ceiling for security ... The Eaglehawk Log Lock Up is a rare example of a building type prevalent in the 1850s but of which only five examples remain in the State. Eaglehawk is one of the more intact examples, and one of only three of this particular form in the State." It is constructed of 30 cm rough-hewn logs stacked 14 high and crossed at the corners with a solid timber door. The museum can arrange an inspection. For more information check out https://vhd.heritagecouncil.vic.gov.au/places/5187.

Bank of Victoria
Located at 9 High Street is the old Bank of Victoria (1881), a two-storey Classical brick building with pilasters, architraves and hood mouldings. It is now one of the few major buildings left in Eaglehawk's High Street. See https://vhd.heritagecouncil.vic.gov.au/places/68230 for more information.

Canterbury Park
Canterbury Park Gardens are located at 3 High Street (opposite the Town Hall) and are considered to be the highlight of the Eaglehawk Open Space Precinct. Originally proposed in 1870, the garden was set out in 1873 on 'upside down country', once a denuded ruin of alluvial gold workings. The extended gardens now include Canterbury Park Oval, Lake Neangar, Lake Tom Thumb and a sports and events precinct. It has an impressive ornamental garden with dahlias, palms and roses and there are walking trails around Lake Neangar and Lake Tom Thumb. Lake Neangar, a popular spot with waterbirds, was named after the local Aboriginal group. It has been estimated that 1500 varieties of dahlia can be seen here during the Dahlia and Arts Festival in March. The park's wrought-iron gates were cast in 1912 at a foundry which then existed on Sailors Gully Road.

Mulga Bill Bicycle Trail
Starting at 66 Kirkwood Road, the Mulga Bill Bicycle Trail runs from Lake Neangar to the Greater Bendigo National Park. "The short trail offers spectacular views, and links Eaglehawk to the Lightning Hill lookout, passing by Lake Neangar, central Eaglehawk and a large area of forest to the north that is part of the Whipstick sector of the Greater Bendigo National Park." For more information check out http://www.heathcote.org.au/regional-touring/bendigo/21-bendigo/things-to-do/bendigo-outdoors-and-nature/106-mulga-bill-bicycle-trail.

St Augustine's, Myers Flat
St Augustine's Catholic Church is located at 218 Sailors Gully Road, Myers Flat. It is recorded in the Victorian Heritage Database as "A brick church erected as a combined church and school in 1864, of interest for its sizeable bellcote in the western gable, and a chimney which emerges incongruously from the northern side of the nave." For more information check out https://vhd.heritagecouncil.vic.gov.au/places/70118/download-report.

Atisha Centre
Located at 25 Sandhurst Town Road, Myers Flat  the Atisha Centre is a Tibetan Buddhist temple and monastery which functions as a centre of Buddhist meditation. "Founded in 1981, the Centre provides a serene and welcoming setting for all who seek time out from busy lives or wish to learn about and practise Buddhism." For more information check out https://atishacentre.org.au or tel: (03) 5446 3336.

Hartland's Eucalyptus Oil Factory
Hartland's Eucalyptus Oil Factory is a family-run business which was established in 1890 and is still operating using the original methods. They produce high quality Blue Mallee eucalyptus oil. They are open daily for sales, tel: (03) 5448 8227. Access to the factory is via the Midland Highway. Turn left at Huntly onto Burgoyne Street and the factory is 9 km along that road. The factory is at 154 Hartlands Road, Huntly North. Check out https://www.facebook.com/Hartlands-Eucalyptus-Distillery-1099484586811371.

* Prior to the arrival of Europeans the area was home to the Neangar Aboriginal people.

* Gold was discovered in Bendigo in October 1851.

* The Eaglehawk goldrush began in 1852 when Joseph Crook found a nugget while searching for some stray horses.

* At the peak of the goldrush the population reached 40,000 although the alluvial gold was already largely exhausted by 1853.

* In 1854 town lots were sold along the Eaglehawk High Street. A national school was opened that year.

* In 1855 a second school and two Methodist Churches were opened.

* The town was declared an independent borough in 1862. It remained so until the early 1990s.

* In the 1870s work started on the local Botanical Garden at Canterbury Park.

* In 1886 the railway from Bendigo reached Eaglehawk.

* The mines ceased operations in the 1890s although there were periods of renewed activity until the 1950s.

* In 1895 Thomas Alexander Browne (aka novelist Rolf Boldrewood) wrote The Sphinx of Eaglehawk.

* The trams to Bendigo were electrified in 1903.

* In 1909 the Eaglehawk Croquet Club was formed.

* In 1994 Eaglehawk became part of the Greater Bendigo city.

There is a useful local website. Check out https://www.bendigoregion.com.au/explore-bendigo/destinations/eaglehawk. 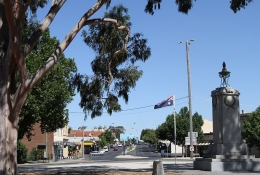 The view up the Lodden Valley Highway from Eaglehawk Town Hall 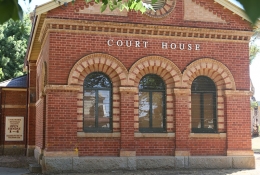 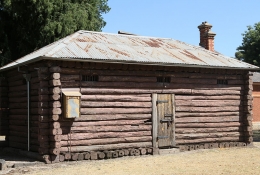 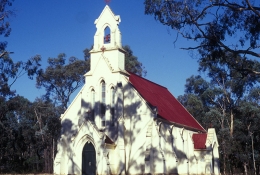