Edithburgh is a popular family holiday destination on the Yorke Peninsula. It has a reputation for excellent fishing for mullet, yellow fin and whiting both off the jetty and the beach; swimming at both Sultana Point Beach and the town's excellent tidal rock pool; snorkelling, sail boarding and scuba diving. Although now a holiday destination, Edithburgh was once the third busiest port in South Australia (after Adelaide and Wallaroo). It is surrounded by nearly 200 lakes which were used to mine salt which was shipped out from the Edithburgh jetty.

Edithburgh is located on the Yorke Peninsula approximately 80 km due west of Adelaide across Gulf St Vincent. To reach the town by road it is necessary to drive 228 km via the Princes Highway and around the top of Gulf St Vincent.

When the town was surveyed in 1869 it was named after Lady Edith Fergusson, the wife of Sir James Fergusson, the South Australian governor from 1868-1873.

Edithburgh Museum
Located in Edith Street this is a typical rural museum with exhibits which explore the history of the local salt industry, the importance of the port and Edithburgh jetty, the shipwrecks including the SS Clan Ranald and other items of local interest. It is open on Saturdays and Sundays from 2.00 pm - 4.00 pm. Tel: (08) 8801 9450 or (08) 8852 6187. Check the website: http://www.yorkeregion.com/edithburghmuseum/

Edithburgh Native Flora Park
A large section of the town centre is taken up by  the 17.5 hectare Edithburgh Native Flora Park (easily accessible two blocks to the west of the shoreline) which has stands of eucalypt, acacia, melaleuca and casuarina, over 1,000 native plants, and is home to parrots, larks, quail and honeyeaters. There are 2.41 km of walks through the park.

Edithburgh Cemetery
The Edithburgh cemetery in Coobowie Road is interesting firstly because it is a window into the early settlement of the area with a large number of German graves (some with German inscriptions) and secondly because it is the burial place of the sailors who drowned when the SS Clan Ranald went down off Troubridge Hill in 1909 with the loss of 40 lives. Only 36 bodies were recovered. The graves are a reminder of the deep racial prejudice at the time. 24 Europeans were buried at one location and 14 "Lascars", variously called Asiatics, blacks, coolies or Indians, were buried elsewhere in the cemetery. As South Australian Shipping History records: "The British officers were buried in the main part of the cemetery but the bodies of the thirty-one Lascar crew members went to the rear of the cemetery in a mass grave. Full details of those were known to the authorities but only a small plaque on it said '31 unknown Asiatics'. Recently a new plaque has been erected naming all 34 Lascar seamen who perished. The bodies of three Lascars were never recovered." For more information check out http://www.southaustralianhistory.com.au/clanranald.htm

The Mosaic Trail
The Edithburgh to Sultana Point Walking Trail is a 5 km walk which allows for either a clifftop or beach option. It is part of the “Walk the Yorke Trail”. Along the trail are nautical-themed mosaics. The mosaics were the idea of Trudie Howith, a local artist, who had a vision to put mosaics on the rocks along the foreshore and encouraged the local community to participate. All materials and labour for the project were donated by the Council, local businesses and community groups. Check out http://edithburghmosaics.waterdata.com.au/Sultana_Point_Mosaics_Trail/Edithburgh_to_Sultana_Point_Mosaic_Trail.html for more details. For a downloadable guide check out http://media.wix.com/ugd/c83607_6f8ab950515941c9851c2b3838cc8c18.pdf

Diving at Edithburgh Jetty
Edithburgh jetty, which is 170 metres long, is now recognised as one of South Australia's premier shore-dive locations. The waters below the jetty are easily accessible via steps on the northern and southern sides of the structure. Divers and snorkelers can "observe dense, multi-coloured colonies of temperate corals and sponges on the jetty pylons. The pylons also provide refuges for various fish, crustacea, nudibranchs and other marine invertebrates. Several of the state's iconic marine species can be seen beneath or near the jetty, including the Leafy sea dragon and the Striped pyjama squid." As well there are big bellied seahorses, Port Jackson sharks and cuttlefish to be observed. The dive depth is 10-12 metres. The jetty was built in 1873.

Troubridge Hill and Lighthouse
Lying 16 km to the south of Edithburgh is Troubridge Hill Aquatic Reserve which offers panoramic views over Gulf St Vincent from the Troubridge Hill Lighthouse. Boating, diving, swimming and line fishing are all permitted in the Troubridge Hill Aquatic Reserve and, although dangerous, it is possible to dive to the submerged wreck of the SS Clan Ranald which lies in 22 m of water. More modestly it is possible to explore the "intertidal reef platform which extends 50m offshore before falling sharply away to 15m depth. The pristine subtidal reef area supports a wide diversity of flora and fauna particularly reef fish. The crevices and overhangs are extremely rich in marine life, particularly sponges, ascidians and gorgonian corals." Check out http://www.pir.sa.gov.au/__data/assets/pdf_file/0007/65419/7._AqResWeb.pdf for a downloadable brochure on the area.
The Troubridge Hill Lighthouse, which is built from wedge shaped bricks, dates from 1890. Along the coast between the lighthouse and Suicide Point on the Scenic Clifftop Drive is the anchor from the SS Clan Ranald.

Troubridge Island Conservation Park
Troubridge Island Conservation Park, which is a small island located off the coast from Edithburgh, is home to a breeding colony of little penguins as well as black faced cormorants, crested terns and a rich variety of other sea bird life. Apart from birdlife the island has an impressive lighthouse which was constructed of cylindrical cast iron segments in 1855 after a staggering seven vessels had run aground in a seven month period in 1850. The island is only accessible by boat with Troubridge Island Hideaway and Charters arranging permits and tours. It is possible to stay in the lighthouse keeper's cottage which has been modernised. For more information contact  Troubridge Island Hideaway and Charter, tel: (08) 8852 6290. For more information about the Troubridge Shoal lighthouse check out http://www.lighthouse.net.au/lights/sa/Troubridge%20Shoal/Troubridge%20Island.htm and for general information on the island see http://www.environment.sa.gov.au/parks/Find_a_Park/Browse_by_region/Yorke_Peninsula/Troubridge_Island

Wattle Point Wind Farm
Located on Old Honiton Road, south west of Edithburgh the Wattle Point Wind Farm has been operating since 2005. It has a total of 55 wind turbines which have a capacity of  91 MW. The blades weigh 7.5 tonnes. There is a viewing area where visitors can stand underneath one of the 68m high turbines. Learn about how they capture nature's renewable resource.

* The Narangga Aborigines lived in this area for tens of thousands of years before the arrival of Europeans. They lived off fish and crustaceans, left their markings on the rocks and left shell middens where they camped.

* In 1802 Matthew Flinders became the first European in the area when he sailed along the coast and named the Troubridge Shoal which, at the time, was nothing more than a sandbar on a limestone reef.

* By 1847 one of the earliest settlers, John Bowden, was running sheep in the district.

* In 1851 the emigrant ship, Marion, was ran aground on the Troubridge Shoal off the coast from Edithburgh. There was no loss of life.

* The Troubridge lighthouse became operational in 1856.

* The Edithburgh jetty was built in 1873 and was used primarily to ship salt, lime and gypsum across Gulf St Vincent to Adelaide.

* Today the town is an important holiday destination on the Yorke Peninsula.

Photo at the top of the page - Edithburgh Tidal Swimming pool - by Grant Hugo, copyright SATC. Thanks again. 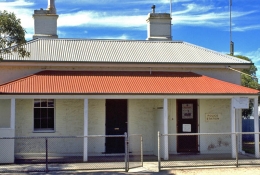 The historic police station built in the 1870s. 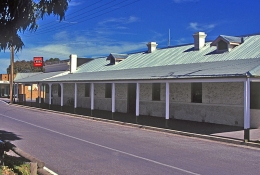 The Troubridge Hotel established in 1873 and listed by the National Trust. 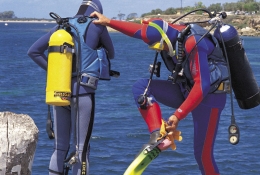 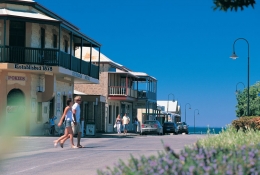 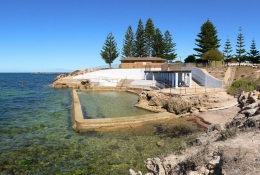