Small rural service centre known as the Beef Capital of the Burnett.

Eidsvold calls itself the 'Beef Capital of the Burnett'. This small, quiet town is nestled in a valley of gently undulating grazing country and is a service centre for the surrounding pastoralists. Today the area is sustained by cattle, timber, citrus and vegetable crops. The main attraction is the new RM Williams Australian Bush Learning Centre which is in a process of expansion and development..

Eidsvold is located 406 km north-west of Brisbane, 227 km west of Maryborough and 192 metres above sea-level.

In 1848 the Archer brothers, Thomas and Charles, moved into the area. They named two of their stations Eidsvold and Coonambula. The Archers were Scottish but their family had moved to Norway in 1825. They named Eidsvold Station after Eidsvoll where Norway's constitution had been signed in 1814.

Eidsvold & District Historical Complex
Today the town's main attraction the Historical Complex incorporates the George Schafer Collection of minerals, gems, bottles, antiquated tools, seven heritage buildings, a railway siding with old rolling stock, and interesting memorabilia. Schafer, who has collected for most of his life, bequeathed his collection to the town.
Knockbreak Homestead is one of the major attractions. Built in 1859 or early 1860 by Guthrie Sinclair, it was moved to the present site and is a fine example of a pioneer's slab hut. "Guthrie Sinclair worked on the Archer brothers’ Eidsvold Station as a shepherd. Paid in sheep, he tendered for a run and moved his family and flocks to Knockbreak, named after his district in Scotland. Other buildings relocated to the complex include the old station buildings of Clonave, the Calrossie store and meat shop and the Riverleigh Railway Fettlers’ Cottage.
"Amongst the displays in Riverleigh, is the Iris Bancroft Soldiers Corner: a collection of the photographs and memorabilia of the local men and women who served for Australia from the Boer to the Vietnam Wars." These quotes are taken from Queensland Museum & Gallery Services website. Check it out at http://www.magsq.com.au/_dbase_upl/Eidsvold%20Profile.pdf. The complex is located at 2 Mt Rose Street, tel: (07) 4165 0895 or (07) 4165 0893.

Hitching Rail
Here is a real piece of rural Australia and its good manners. The Alice Maslen's Hitching Rail is located in the main street. It was erected by the local council as recently as 1980. At the time Alice was an old woman who, in the age of the motor car, still brought her horse and sulky into town. She was a real remnant of the 19th century.

RM Williams Australian Bush Learning Centre
Located on the Burnett Highway at the southern end of Eidsvold, the RM Williams Australian Bush Learning Centre was opened in 2010. The plan was to create a learning centre - it was developed by the North Burnett Regional Council in association with the RM Williams family - to promote the unique bush culture and history of the local area and the influence of RM Williams on that culture. It was planned that the Centre will have a specific focus on youth and the indigenous population.
By 2017 there were rooms showcasing local history and bush culture. There are plans for Aboriginal artefacts and culture including a bora ring, slab hut (formerly used by indigenous stockmen) and a lemon tree to be added to the site. RM Williams lived at Rockybar, a property west of Eidsvold from 1955-1972. The centre is open from Monday - Friday 8.30 am - noon / 1.00 pm - 4.30pm (Closed between 12 noon and 1pm for lunch); Saturday and Sunday 10.00 am - 2.00 pm. Check out http://www.rmwilliamscentre.com.au for more information and details of exhibitions and open days. Tel: (07) 4165 7272.

Archer Homestead
Located on the banks of the Burnett River about 8 km west of Eidsvold on the Cracow Road, the Archer Homestead has been well preserved and has many historic pieces with this simple slab house. It can be inspected but it is important to contact the Visitor Centre at (07) 4165 7272 before you visit the property.

* Prior to the arrival of Europeans the area around Eidsvold was home to the Wakka Wakka Aboriginal people.

* Eidsvold was settled by Europeans in 1848 when the Archer brothers, Thomas and Charles, moved into the area establishing large stations. Thomas called his Eidsvold.

* The Archers started grazing sheep but soon changed to cattle. It is said that Australia's first game of golf was played at Eidsvold station, which was also the first Australia stud to use Santa Gertrudis cattle.

* As early as 1858 gold was found in the area but not in sufficient quantities to attract prospectors.

* In 1886 a Mr Achilles found gold and the resulting rush created an overnight township which had,"8 public houses, 8 stores, 2 bakers, 2 butchers, will all other trades except shoemaker, R.C. Church, Salvation Army Barracks, 1 dance saloon, 2 steam sawmills and a population of about 1200.' It is estimated that during the life of the goldmine about 100,000 ounces of gold were extracted from the area.

* The railway line from Mundubbera reached Eidsvold in 1924.

* In 1926 Martin Snelling, a local livestock agent, started cattle sales in the town.

* In 2008 Eidsvold became part of the North Burnett Regional Council.

* In 2015 the town experienced both an earthquake (5.2 on the Richter scale) and flooding as a result of Cyclone Marcia.

There is no dedicated website for the town but the Bundaberg Region website has useful information. Check out http://www.bundabergregion.org/eidsvold. 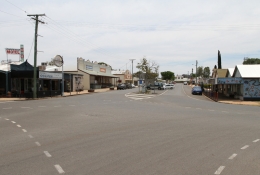 The main street of Eidsvold. 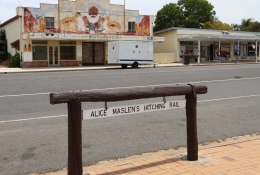 The Alice Maslen Hitching Rail over the road from Munjoorum, the Aboriginal centre in the old Eidsvold Entertainment Centre. 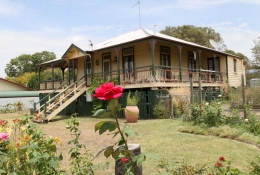 A classic Queenslander in the main street of Eidsvold. 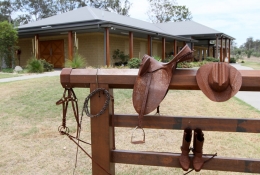 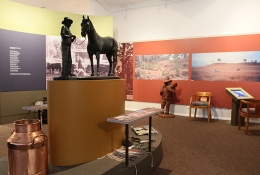 The bronze sculpture of RM Williams and his horse in the Australian Bush Learning Centre. 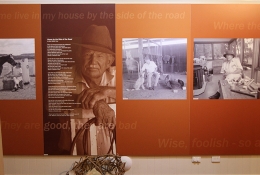 Part of the RM Williams display inside the Australian Bush Learning Centre. 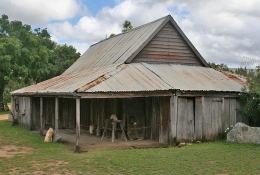 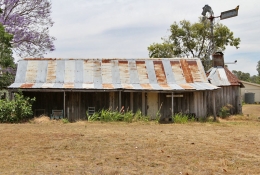 Knockbreak Homestead, a slab and shingle hut in the grounds of the Eidsvold Historical Complex.