Eildon is situated near the artificial Lake Eildon which has become an important holiday destination. The town has a pub, a supermarket, restaurants and cafes and there is a variety of accommodation options including motels, caravan parks and houseboats. With 515 km of shoreline, Lake Eildon it is one of the largest artificial lakes in the state and was built to irrigate the Goulburn Valley and generate hydro-electricity.

Eildon, on the shore of Lake Eildon, is located 140 km north-east of Melbourne via the Maroondah Highway.

In 1839 a Scottish settler, Archibald Thom, named his property 'Eildon Station' after the Eildon Hills which lie south of Edinburgh in Roxburghshire, Scotland. It was his wife's birthplace.

Lake Eildon
Lake Eildon consists of long, narrow serpentine arms which reach up the valleys of the Big, Goulburn, Howqua, Jamieson and Delatite Rivers. It covers 13,832 ha, has 515 km of shoreline, has a catchment of 3,885 ha and, when full, holds 3,390,000 megalitres of water with an average depth of 24 metres. It is a hugely popular recreation destination for holidays on houseboats, water skiers, sailboards, jet-skis, power boats, canoes, yachts and anglers. Fishing includes trout, redfin, carp and Murray cod. There are numerous picnic areas, boat-launching ramps and viewing areas.

Lake Eildon National Park
Lake Eildon National Park lies to the north, south and east of the Eildon township. It is well known as a place for canoeing, camping, boating, bushwalking and sailing. The park contains gold mining relics, old farmhouses, plenty of wildlife (particularly kangaroos) and 279 plant species including, in spring and early summer, ground orchids and wildflowers.

Walks in the Southern Section of the Park
The route out to Jerusalem Creek (the camp ground lies 12 km south of Eildon) passes a loop road to Mount Pinninger and Foggs Lookout which offer excellent, panoramic views over the lake, the town, the dam wall, and the surrounding countryside.
There is also a 15 km walk which starts from the ford at the head of the Jerusalem Creek Inlet and leads to The Pinnacle.

Walks in the Northern Section of the Park
Located north via Skyline Road, the northern section of the park was once gold mining country and old shafts and other remnants can occasionally be seen along the park's walking tracks. Today there are red box, red stringybark and peppermint gum communities. Unfortunately much of the old-growth timber was felled for usage in the mines. Wildlife includes grey kangaroos, wedge-tailed eagles and crimson rosellas.
There are a number of excellent walks in the Park ranging from easy lakeside strolls between the camping areas to longer hikes in the more remote and scenic areas of the park.

• Candlebark Nature Trail – Departs from the Candlebark Campsite and Car Park, take about 40 mins and is a 2 km circuit. Expect to see kangaroos, wallabies, echidnas and some remnants of the local gold mining industry.

• Coller Bay Walking and Cycling Track – Departs from the Devil Cove Campsite, is 90 minutes (or 45 mins to Lakeside) and covers 3.5 km. It connects the camping and day visitor areas from Devil Cove to Lakeside.

• Wallaby Bay Walk – Departs from Perfect Cure Creek Car Park to Cook Point, is 40 minutes and covers 2.5 km or can be 7 km (to School Point) which will take around 2 hours one way. It  follows the lake shore to Cook and School Points. Stop at one of the points for a swim, before returning the same way. It can include Merlo's Lookout which offers views of Coller Bay.

• Estate Spur and Bolte Bay Tracks – Departs from the Herb Fitzroy Day Visitor area and is either 3 km and 1 hour one way or 2.2 km, 45 mins one way. The track climbs to the top of the hill, heads onto Estate Spur and offers panoramic views over the lake before descending to Point Mibus or Lakeside. For a longer walk descend to Bedrock Creek, and follow the Bolte Bay Track to Point Mibus.

• Pinnacle Walking Track – Departing from the southern end of the Jerusalem Creek Campground, this 10 km, 4 hours return, track leads up to The Pinnacle for views across the lake. The track can be slippery in wet weather.

Brochures outlining the walks are freely available from the camping offices. There are usually plenty of kangaroos and other wildlife about the campgrounds. For further information on the park check out https://www.parks.vic.gov.au/places-to-see/parks/lake-eildon-national-park and download the maps and Lake Eildon Visitor Guide from that page.

Houseboats
Lake Eildon has become well known as a place where, for a holiday with a difference, visitors can hire a houseboat. Most of the rental houseboats have TV, dining tables, a stove and griller, fridges, heating, bathrooms and bedrooms with single, double and queen beds. Check out https://www.lakeeildon.com/houseboating for more details and booking.

Snobs Creek Freshwater Discovery Centre
Located 6 km south of Eildon on the Goulburn Valley Highway, the Snobs Creek Freshwater Discovery Centre breeds hundreds of thousands of fish each year for release into the inland river systems. There is a visitors' centre with a display area and an aquarium. The baby trout may be hand-fed in retaining ponds outside. The hatchery is open from Saturday to Wednesday from 11:00 am to 4:00 pm and every day during school holidays, tel: (03) 5774 2208.

Snobs Creek Falls
Located 12 km south west of Eildon, on Snobs Creek Road is the Snobs Creek Falls Car Park. It is a short walk to observation points over the falls which drop more than 100 metres over a series of rocky outcrops. The views down the Goulburn Valley are dramatic. The falls are surrounded by moist eucalyptus forest and fern gullies and the area is known for its bird life (including lyrebirds) and koalas, wallabies, wombats and possums. The name of the falls comes from a West Indian boot maker who owned a shop near the creek. 'Snob' is an old English term for a boot maker. There is an excellent, detailed description at https://waterfallseasons.com/waterfalls-in-victoria-snobs-creek-falls-eildon.htm.

A Little History about Lake Eildon
It took five years to build the Greater Eildon Dam. Work commenced in 1951 and finished in 1956. The result was a vast lake (the largest in Victoria) which has become the state's most popular inland waterway. Lake Eildon has a capacity of 3,334,158 megalitres. It filled in 18 months due to a particularly wet year of 1956. During the construction of the Eildon Dam, nearly 4000 workers and their families were housed in the township of Eildon which was constructed between 1950-1952. The town comprised 300 permanent houses, pre-cut and fabricated in England which were assembled to 14 different plans in an interesting attempt to eliminate uniformity. At the same time, roads, water supply, drainage, sewerage, and electricity were installed. It was an artificial town. A block of eight shops were built and occupied in 1954.

* Prior to European settlement the area was inhabited by the Yauung-Illam-Baluk and Yowung-illam-balluk clans of the Taungurung First Nation peoples.

* The 'Eildon' station was established in 1846 and named after Eildon Hills in Roxburghshire, Scotland. It was named by Archibald Thom.

* Gold was discovered in the area in 1867, although local returns were small.

* By the end of the 1860s the small town of Darlingford had been established in the district.

* Timber getting was also practiced in the 1860s.

* Sugarloaf Reservoir Dam was built between 1915 and 1929. Darlingford was flooded by the construction of the dam.

* Eildon was built to house the workers at the Sugarloaf Reservoir Dam.

* Around 1915 a state school was opened for the children of the dam workers.

* The pine forests around the lake are predominantly regrowth forests which were planted in the 1930s.

* The town of Eildon commenced in 1950 as an accommodation centre for the construction workers. It was completed in 1952.

* A new dam, the Greater Eildon Dam, was built between 1951 and 1956. The aim of the dam was to provide water for the farms in the lower Goulburn River catchment area.

* Heavy rains resulted in the dam being filled in 1956.

There is a very useful local website complete with a webcam so you can see what the weather is like. Check it out http://www.lakeeildon.com.

The view over Lake Eildon 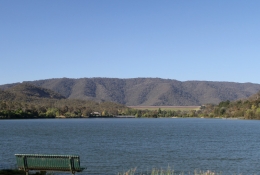 The view across to the dam wall at Lake Eildon 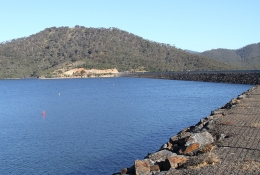 The dam wall at Lake Eildon 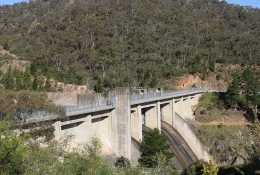 The water race on the dam wall at Lake Eildon 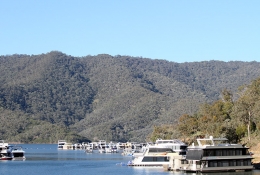 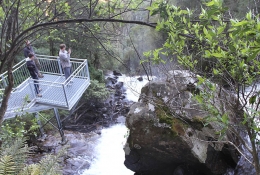 The viewing platform at Snobs Falls 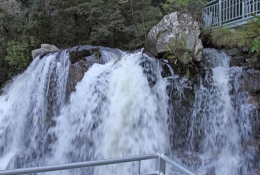 View up the Snobs Falls from the lower viewing platform.