Eldorado is one of those strange goldrush towns which once spread along the valley and had a population of over 7,000 residents. Since the departure of the gold miners the town has only a few hundred inhabitants but the physical size of the town has not diminished. Consequently Eldorado spreads ... and spreads ... and spreads. In the centre is a small shopping centre, a park, the church and the local museum. Beyond it the surviving houses are scattered along the valley. The highlight is clearly the remarkable Eldorado Dredge which is not only a huge piece of machinery in the middle of nowhere but an opportunity to learn about the latter stages of the town's gold mining and mineral riches.

Eldorado is located 276 km north-east of Melbourne via the Hume Highway. It is 21 km east of Wangaratta and 29 km west of Beechworth.

It is an amusing irony that this historic gold mining town was not named because of the gold but rather because of the rich green pastures. A drover named William Baker seeing the richness of the valley believed it was an Eldorado for his animals and named his property accordingly.

Eldorado Dredge
The Eldorado Dredge is one of the most fascinating pieces of equipment on any of Victoria's extensive goldfields. When it was built it was 64 metres long, 20 metres wide at the stern and 50 metres wide at the bow. It was completed in 1936, was reputedly the largest in the southern hemisphere (certainly the largest in Australia), and continued to operate until 1954 extracting 2.3 million grams of gold and 1475 tonnes of tin. It had 118 buckets each weighing 1.4 tonnes and required 900 horsepower to operate. It was so noisy it could be heard 20 km away. For more information there is an excellent downloadable brochure at http://parkweb.vic.gov.au/__data/assets/pdf_file/0016/315511/Heritage-story-Eldorado-Dredge.pdf. The dredge was designed and built by Thompson's Engineering for the Cocks Eldorado Gold Dredging Company in 1935-36. By the time it was decommissioned it had dredged 30 million cubic metres from the river flats of the Eldorado Plain. Each dredge bucket was capable of digging and lifting 0.3 cubic metres of soil. There is a pleasant 15 minute walk around the lake it created with lots of interesting signage to explain the entire process. There is also an excellent Parks Victoria Visitors Guide which can be downloaded at http://svc043.bookeasy.com/images/beechworth/eldoradodredge.pdf

St Jude's Anglican Church
Built in 1870 when Eldorado's population was 4,000, this small and beautiful sandstone church is a reminder of how a town can change. It was built to reflect an affluent and prosperous town. Now it is the most elegant building in the town.

Old School and El Dorado Museum
Built in the 1860s there were plans to demolish this historic school house (one of the oldest buildings in the town) until it was used as a venue for the Eldorado Museum. Today the museum has buckets from the Eldorado dredge outside and inside has a wide variety of well-presented articles ranging from items from the old school through period costumes, World War memorabilia, original muzzle loading rifles, an old phonograph with cylinders, a pedal organ purchased in 1880, an extensive rock, gold and gem stone collection, and a detailed history of mining in Eldorado. Outside are old tractors, farm machinery, horse carts and trailers. The Museum  is located in the State School No: 246 building on the main road and is open from 2.00pm - 4.00pm on Sundays and 10.00am - 4.00pm on public holidays. There is a small entry fee, tel: (03) 5725 1542 or email hello@eldoradomuseum.com.

* Prior to European settlement the district was inhabited by Aborigines of the Waveroo language group.

* Gold was discovered in the district in 1854 as miners moved up and down the creeks from Beechworth. Over the next twelve months thousands of miners arrived hoping to find their fortune. At the time it was recognised as one of the richest alluvial goldfields in Victoria. It was not exhausted until 1856 when there were 6000 - 7000 miners and prospectors digging between Reids Creek Falls and Sebastopol.

* The town soon moved into deep lead mining with shafts being sunk to depths of 100 metres and by 1860 tin was being mined as well. By the 1870s there were around 4000 people living in the town many of whom were Cornish miners who had come across from the copper mines of South Australia.

* The technique of deep mining was abandoned when, in 1895, there was a collapse at McEvoy mine resulting in the deaths of six miners. The McEvoy mine stopped operating in 1901.

* After that most of the town's gold extraction was a result of open cut sluicing and dredging activities. The noted historian Mary Ryllis Clark has observed "the dredges were like gold-panning factories - digging out the creek beds, flushing the material through a series of large sieves, washing away the rubbish and catching the sediment of heavier gold."

* In the 1930s the price of gold more than doubled and this led to the formation in 1934 of the Cocks Eldorado Dredge Company which constructed a state-of-the-art, electrically powered dredge.

* Many of the miners houses were removed from the town in the 1950s.

* Today the town is a sleepy reminder of its rich and well-populated past. The area is still rich in minerals with citrine, morion, amethyst, jasper, corundum, lydionite, agates, quartzites, diamonds, saphire, topaz, garnet and zircon all being found in the district. Check out  http://www.albury.net.au/~tim/eldhist.htm#WOOLSHED ROAD for more details.

There is no specific visitor information centre but the Eldorado General Store will help, tel: (03) 5725 1592.

There is a lot of useful information about bicycling, fossicking, and exploring the area on http://www.albury.net.au/~tim/eldor1.htm 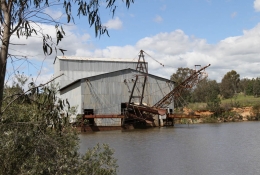 The Eldorado Dredge in a lake of its own making. 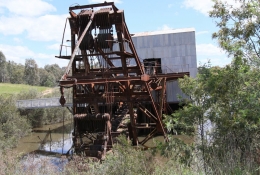 The dredge machinery is 50 metres wide at the bow. 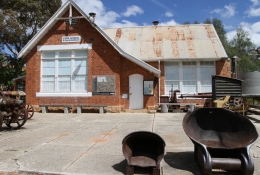 State School No.246 - now the Eldorado Museum with huge dredge buckets out the front. 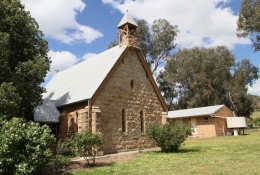