Prosperous regional service centre and gateway to the gemfields.

Emerald is a thriving rural service centre with a rural training college, a large number of farm machinery sales outlets, a huge irrigation dam and an airport. Established in 1879 as the base for the railway line, it has slowly grown to be the major regional centre of the Central Highlands and the gateway to the Central Western district. The Capricorn hinterland contains the largest sapphire gemfields in the world. Emerald grew very rapidly in the 1980s and 1990s as a dormitory town for major new coal mines in the Bowen Basin.

Emerald is located 270 km west of Rockhampton and 878 km north west of Brisbane via Rockhampton.

When land was taken up in the area around 1860 a settler named P.F. MacDonald, impressed by the greenness of the pastures, called his property Emerald Downs. The town takes its name from his property.

Visitor Information Centre
The Visitor Information Centre is located to the west of the town centre on the Capricorn Highway and is surrounded by interesting and unusual sculptures and artefacts. There is an excellent Aboriginal canoe tree, an Historic Precinct with a number of historic buildings, the Centenary of Federation Mosaic Pathway and the huge Van Gogh Sunflowers painting.

Emerald Dragon Sculpture Outside Visitor Information Centre
Outside the Visitor Centre is a large art-work piece out of scrap metal named the Emerald Dragon that was displayed at the 2015 Emerald Show attracting a lot of interest. It was created by local sculptor, Jase Moore, and purchased by an anonymous woman from New South Wales who donated it for public display in Emerald. It was sited next to the Emerald Visitor Centre because it was believed it would make a nice addition to the Emerald Walking Trail that includes the town’s other public art pieces.

Centenary of Federation Mosaic Pathway
Located in Morton Park and winding across the park from the Visitor Centre to the huge image of Van Gogh's Sunflowers is the Centenary of Federation Mosaic Pathway. Officially dedicated in 2001 the mosaic pathway comprises 21 tiled mosaics which depict the history of the Emerald district. They were designed by ten artists from  Emerald and each one tells a story of a chapter in Emerald's life. Thus the first mosaic is "Creation" and is accompanied by quotations from Genesis, Captain James Cook and Oodgeroo Nunukul who wrote: "In the Dreamtime all the earth lay sleeping. Nothing grew. Nothing moved. Everything was quiet and still. The animals, birds and reptiles laying sleeping under the earth's crust."

Van Gogh's Sunflowers in Morton Park
Reputedly the world's largest Van Gogh Sunflowers painting is located behind the Visitor Centre in Morton Park. The "easel" upon which the painting is mounted is 25 metres high. It is part of a concept by Canadian public artist, Cameron Cross, to erect seven Sunflower sculptures in seven different countries, reproducing Van Gogh's seven different Sunflower paintings.
As Cross explains on his website: "This incarnation of the big easel project focuses on Vincent Van Gogh's sunflower paintings. Each sculpture consists of a painting which measures 7 metres x 10 metres, and rests on a 25 metre -17,000 kilogram steel easel. The first easel has been completed and was erected in Canada; the second in Australia and the third easel was successfully presented in the USA and now rests in the State of Kansas.  Discussions are currently underway for the remaining four easels locations.
"The concept for this project includes reproducing all seven of Vincent van Gogh's Sunflower Paintings in seven countries around the world. Van Gogh painted seven different but similar Sunflower paintings between the years 1888-1889. The symbolic reference of Van Gogh's Sunflower paintings is very strong. I believe he saw the Sunflower as a representation of life, hope and renewal.
"This series of seven large easels reflect my own interest in appropriation and reproduction in contemporary art. The seven sites will range from rural to urban with population ranging from several thousand to several million.
"The idea of taking a very traditional symbol of art - the 19th century still life on an easel - and enlarging it to an enormous proportion, interests me greatly. The traditional 'painting on an easel' is now a contemporary work of art. By placing virtually the same sculpture in seven countries, with distinct cultures, I am curious as to how these sculptures will be interpreted. Will the sculpture be perceived for its reference to the sunflower, Van Gogh or art in general?
Emerald's Sunflower painting was finished on 8 November 1999. And the answer to Cross's question about how the painting is conceived: "The painting celebrates the Central Highland's reputation as a major sunflower producer." according to the local website.

The Historical Precinct
Located next door to the Visitor Centre is the Historical Precinct which includes the Emerald Pioneer Cottage which was built as a shop on Clermont Street around 1880; the town's lockup (built in 1910 and still operating in 1970); the ordinary, timber St Marks Presbyterian Church (built in 1884); and a Communications Museum which has memorabilia tracing the town's written and sound communications history.

Emerald Railway Station
The Emerald Railway Station has been classified by the National Trust it is arguably the finest public building in the Central Highlands. Built in 1900 and restored in 1986, this National Trust listed Railway Station is well worth a visit.
The Queensland Heritage Register records that "The station building and yard dominates the south side of the main street (Clermont Street). The station building, though very similar to earlier buildings of this group at Mount Morgan (1898) and Archer Park (1899), is distinguished by the semi-circular roof to the central portico which is in other respects similar to its precursors. Flanking pavilions are also distinctive elements having window shades and pedimented treatment with louvred lunettes, repeating the motif established by the central portico. The roadside verandah has cast iron columns and is partially built-in. The platform shade, unlike the carriage shades of the earlier designs has cast iron posts with a curved roof, comparing with South Brisbane (Melbourne Street) and Wallangarra. Accommodation consists of the central vestibule with former booking office and station masters office to the east (now office for maintenance staff and the stock officer) and former refreshment rooms to the west (now station offices)." For much more detailed information check out https://environment.ehp.qld.gov.au/heritage-register/detail/?id=600490.

Fossilised Wood
Outside the Emerald Town Hall in Egerton Street is a piece of fossilised wood estimated to be 250 million years old. It was dug up in 1979 when a new railway bridge was being built across the Mackenzie River. Discovered in the year of Emerald's centenary it was presented to the town by BHP who were operating the Gregory Mine to the north of the town at the time.

Botanical Gardens
The Emerald Botanic Gardens are located on the banks of the Nogoa River and cover an area of 42 ha. They were established in 1987 by the Emerald Shire Council and local residents Lawrie and Myra Stanton. The Gardens are home to 12 different themed plant communities, most representing plant species that are native to the region, have an historic windmill and, amusingly, have a "yarn pit" where you can stop and have a yarn. The gardens are the perfect local place for a picnic.

Lake Maraboon and Fairbairn Dam
Lake Maraboon, which has been dammed and expanded by Fairbairn Dam, is vast (three times larger than Sydney Harbour) and its waters have become a popular leisure haunt for the Emerald residents. Lake Maraboon is stocked with eight different kinds of fish including barramundi, silver perch, saratoga, Murray cod and golden perch making it a popular spot for anglers. It is famous for its red claw crayfish. There is also swimming, walking and water skiing. There are several picnic tables and electric/wood barbecues in the area.

* Prior to the arrival of Europeans the area was occupied by members of the Gayiri Aboriginal language group.

* In 1845 Ludwig Leichhardt became the first European in the area. Leichhardt named the nearby Comet River after seeing a comet and he inscribed the word 'Dig' on a tree by the banks of the river. The tree is now in the Queensland Museum in Brisbane.

* Land was taken up in 1860 by the area's first settler Peter F. MacDonald.

* In 1866 MacDonald named his property Emerald Downs because he was impressed with the lush greenness of the district after rain.

* In the 1860s both gold and copper were found in the area and there was a brief flurry of interest.

* Emerald was surveyed in 1878 in anticipation of the arrival of the railway.

* In 1879 the town became the terminus for the railway line from Rockhampton. This year saw the building of a local school.

* A branch line to Springsure was established in 1887.

* The Emerald Star newspaper was first published in 1899.

* Emerald would have continued as a small town had it not been for a decision made in 1948 by the British Food Corporation to grow sorghum in the area. This highlighted the suitability of the local soil to crop growing.

* The huge Fairbairn Dam, located south of the town, on the road to Springsure, was built in 1972 with a storage capacity of 1,440,000 ML. This facilitated the shift of the shire's economic focus from cattle to crops. It now produces over 25 % of Queensland's cotton.

* On New Years Day 2011 the town experienced record floods with the river peaking at 16 metres.

There is a useful local website. Check out http://www.capricornholidays.com.au/destinations/emerald/ for more information. 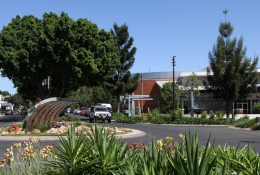 The sculpture on the corner of Edgerton and Borilla Streets. 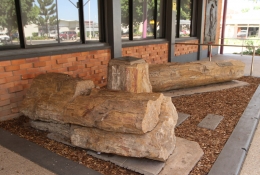 The fossilised tree outside the Emerald Town Hall. 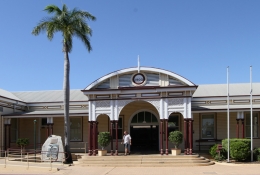 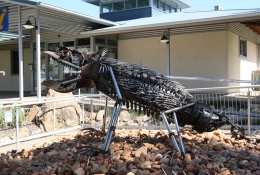 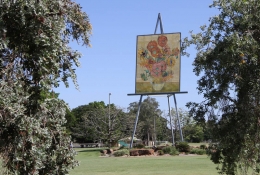 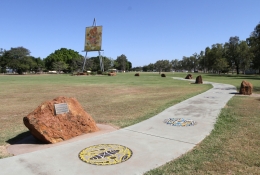 The Centenary of Federation Mosaic Pathway in Morton Park. 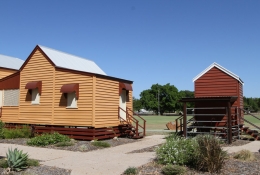 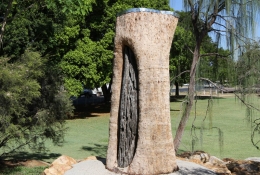 The carefully preserved "canoe tree" in Morton Park near the Visitor Centre. 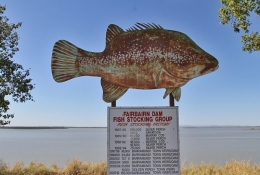 The Big Barramundi at Fairbairn Dam 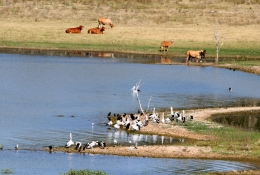 Pelicans and cattle on the shoreline of Lake Fairbairn.