Emmaville is a small rural township with little more than a general store, a pub and a mining museum. Surprisingly for such a small town the mining museum has a number of impressive rock collections and, just outside the town and rarely visited, are the interesting ruins of the Ottery arsenic mine. It was once a private town and today it is a basic centre serving the local farming, grazing and mining communities. There is good trout fishing in the local rivers.

Emmaville, which is 872 m above sea-level, is located 649 km north of Sydney via the New England Highway, 353 km south-west of Brisbane and 43 km north of Glen Innes.

When the miners first arrived, the town and surrounding settlement was known as Vegetable Creek reputedly because of the Chinese market gardens which provided food for the miners. It was officially changed in 1882 to honour Emma Maria Greville, the wife of Lord Augustus Loftus, the then Governor of New South Wales.

Emmaville Mining Museum
It is unusual for a town as small as Emmaville to have an attraction which experts consider to be one of the finest in the country. Located at Moore Street and open from 10.00 am - 4.00 pm Friday to Wednesday (see http://www.emmaville.net for further details), the Emmaville Mining Museum started with a collection of minerals bequeathed to the local community by Mr and Mrs Jack Curnow. Given that the collection was housed in the large Foley's General Store and sensitively displayed, other collectors offered their rock collections and so today a huge room is devoted to the Jillet, Gilbey, Ellis, Schumacher, Trethewey, Maskey and Hermann rock collections. But the museum is more than rock displays. Its contents include more than 300 historic photographs, a replica blacksmith's shop, a replica mine entrance, an excellent replica of a rural general store, an extensive bottle collection and minerals collected in the local area including sapphire, garnet, topaz, arsenic, beryl, quartz and fossils all of which it is possible for keen collectors to purchase. tel: (02) 6734 7025. They will open at other times by appointment.

Fossicking
The area around Emmaville is known as "one of the world's richest mineralised belts" and consequently fossicking is very popular. Locals are happy to provide advice and that is no more complex than talking to Donna at the General Store or asking the volunteers at the Mining Museum. It is also worth consulting the Glen Innes Tourist Information Centre, tel: (02) 6732 2397 particularly if you want a professional guide or want to fossick on private property. The area is known for its sapphire, garnet, topaz, arsenic, beryl, quartz and fossils.

Ottery Arsenic Mine
Drive 5 km out of Emmaville on the Deepwater Road until you reach Tent Hill, turn left towards Torrington and continue for 3 km until you reach a cattle grid, before you cross it, to the left, is a gravel track which leads to the old Ottery tin and arsenic mine site. It seems to be rarely visited because the short path is overgrown but there are good information boards and it is easy to understand the mining process. The sign at the beginning of the path to the mine says simply "Commenced in 1882 to provide tin. In 1920 arsenic was also produced. 28 men employed for many years. Operations ceased in 1957." There is an excellent series of boards in a shelter near the works. They describe in detail the history of the mine (Did you know that "the Ottery mine site is one of only about three arsenic treatment plants still remaining in the world where condensing brick chambers were used and precipitated arsenic was removed by hand."), the treatment process, the handling and the production.

The Emmaville Panther
Australia doesn't have enough mythical beasts. So lets add the Emmaville Panther to the very short list. It has now been worrying the locals for 110 years starting with Harry Leader and his brother in 1902 who, after hearing a blood-curdling roar, shot the animal and sent the hide to Sydney where a tanner told them it was a panther. But it wasn't the only one. The panther has since been sighted in 1958 (twice), 1963 and 1968. Check out http://www.nnsw.com.au/emmaville/panther.html if you want more details.

Torrington
The village of Torrington is located 25 km north-east of Emmaville. When tin was discovered in the district in 1881 miners moved to the area and by the 1920s over 500 miners were working the lode and operating the sixteen batteries. As well as tin, both wolfram and bismuth were mined. Today it is claimed that the Torrington district has the largest deposit of topaz (silexite) in the world. This attracts fossickers to the district. Relics from the town's mining past, including a Cornish Buddle and Five-Head Stamper Battery, can still be seen.

There are two excellent walking trails. One goes to Mystery Face (3.5 km) and passes such exotic rock formations as the caterpillar rock, the pig's face, the lion's head, mushroom rock, the easter egg and finally reaches the Mystery Rock Face. There is also a 2 km walk to Thunderbolt's Lookout from Nomads Picnic area.

The Torrington State Recreation Area spreads across 30,000 ha and is known for its "scenic rock outcrops and balancing boulders, gorges, swamps and small creeks. From September to March the bush becomes a blaze of colour with spectacular wildflower displays".

* Before European settlement the Jukambal, a sub-group of the Murri people, had lived on the land around Emmaville for tens of thousands of years.

* In 1839 settlers moved to the Emmaville area and properties - named Wellington Vale, Rangers Valley and Strathbogie - were established.

* In 1872 a piano tuner named Thomas Carlean discovered stream tin on Vegetable Creek in the Strathbogie property. His discovery earned him a fortune.

* 1876 the Bank of New South Wales and a telegraph service were established.

* 1881 saw the first Medical Benefits fund in Australia created in the town.

The source of all local knowledge is Donna at the Emmaville General Store and Newsagency. She is the town's information centre, tel: (02) 6734 7240. You will also find that the volunteers at the Emmaville Mining Museum can be helpful.

Although the emphasis is on encouraging visitors to stay in their cabins, the Ben Falls Retreat site (http://www.bensfallsretreat.com/) has lots of useful information about horse riding, gemstone fossicking and fishing in the local area. 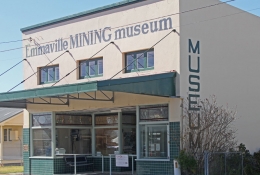 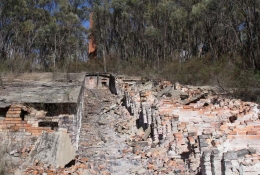 The Arsenic Refining Plant at the historic Ottery Arsenic Mine with the mine chimney in the background.