Quiet seaside resort town on the coast east of Rockhampton.

Emu Park is a coastal resort town which lies south of Yeppoon and east of Rockhampton. It is part of a pleasant scenic drive from Rockhampton which includes Emu Park, heads north along the coast to the Capricorn Coast National Park before reaching Yeppoon. It is known primarily for its views across to Great Keppel Island and its remarkably beautiful Singing Ship sculpture.

Emu Park is located 664 km north of Brisbane and 45 km north-east of Rockhampton.

Emu Park was originally known as Hewittville but when people started holidaying in the area it became known as Emu Park. No one is sure of the origins but, logically, it was probably because there were flocks of emus near the beach and the area behind the beach was park-like.

The Singing Ship
The main attraction in Emu Park is the Singing Ship musical sculpture on the headland. It is located in Kele Park, south of the main beach, with views across to Keppel Island. The sign on the sculpture reads: "The Singing Ship - to honour Captain James Cook R.N. 1728-1778 Explorer Navigator Cartographer who discovered and named Keppel Bay 26-28 May, 1770."
Cook recorded in his journal on 27 May 1770. "At Noon we were about 2 Leagues from the Main land and by observation in the Latitude of 22°53'S, Longitude made from Cape Capricorn 20 Miles west. At this the northernmost point of land we had in sight bore NNW distant 10 Miles, this point I named C. Manyfold from the number of high hills over it. Latitude 22°43'S. It lies N26° West distant 17 1/3 Leagues from C. Capricorn, between them the shore forms a large bay in and off it are known by the same name. In this Bay is good anchorage where there is a sufficient depth of water."
When there are onshore breezes the Singing Ship sculpture sings almost constantly. The effect, particularly on a sunny day when the ship gleams, is a genuinely powerful symbol of the beauty of ships and the power of the ocean. The design was by Mrs C. M. Westmoreland who won a local competition aimed at commemorating the 200th Anniversary of Cook's discovery of Australia. It was constructed by S. W. Kele, a Rockhampton steel and concrete contractor, and the engineering and acoustic problems were solved by George Cain and David Thomas from the Capricornia Institute of Advanced Education.

Emu Park Centenary of ANZAC Commemorative Precinct
Created to celebrate the centenary of World War I, this project was started in 2014 and was the vision of Ross Coulter, an active member of both Emu Park Lions & RSL clubs. The memorial precinct includes an interpretative memorial walkway that embraces the spectacular headland (a lookout post during World War II), a viewing platform, a fascinating timeline, and a beautiful pictorial Gallipoli artwork. It is an opportunity to understand fully the scale and commitment of Australia's involvement in World War I. The Gatehouse features 26 floor-to-ceiling panels telling the story of the war, from the shores of Gallipoli to the legend of the Anzacs. The monument path and boardwalk connect the Precinct with the Singing Ship.

Emu Park Historical Museum
The Emu Park Museum is located at 17 Hill St and is open Monday to Friday 9.00 am to 1.00 pm.  Tours on Saturday and Sunday can be organised by prior arrangement, tel: (07) 4939 6080. Check out http://www.emuparkmuseum.org.au. The website explains the nature of the collection: "Information is available about King O’Malley who recuperated at Emu Park after serious life threatening illness ... The Museum has a vast collection of railway paraphernalia including old buildings, trolleys and models, including a working model railway. Other collections include natural history, dolls, cameras, hand tools, bottles, shells, gramophones and old photographs including one of the ‘famous’ old Croc which hung on the outside wall of the Pine Beach Hotel ... and the recently opened Maritime Museum which contains a huge, exquisite collection of outstanding model ships ranging from the earliest vessels through icons such as Endeavour and Victory along with more modern naval vessels and commercial vessels."

Emu Park Botanic Gardens and Bell Park
Originally gazetted in 1899 the Emu Park Botanic Gardens, it was listed on the Queensland heritage register in 2003. Following the establishment of pathways and seating by the Emu Park Ladies Improvement League, the Reserve became a popular destination for locals and holidaymakers and by the 1940s it was a popular site for large company picnics.
The Botanic Garden remnant known as Bell Park is 11 ha and has large, open, grassed areas with some more formally planted rows of hoop pines. Bell Park contains a range of mature pines on the eastern border [sea side] and open grassed areas. Other areas of mature vegetation include hoop pines along the Hill Street entrance to the park; and pines and coconut palms in the south-west corner.
Structures within Bell Park include a timber tower thought to be a judges box/starters box, near this structure is a large, open grassed area said to be a runners track; two timber rotundas, one constructed with tree trunks for uprights, while the second rotunda has uprights made from sawn timber. Check out https://environment.ehp.qld.gov.au/heritage-register/detail/?id=602326 for more details.

Capricorn Coast National Park
This is a very recent National Park. It was created in 2003 from 64 hectares of land (and is now 114 ha) stretching between Yeppoon and continuing south of Emu Park - most notably Vallis Park, Rosslyn Head, Double Head, Bluff Point, Pinnacle Point and Cocoanut Point. It is a series of coastal volcanic headlands which offer panoramic views up and down the coast. As well there are a series of walks through rich and complex tropical vegetation.
The highlights of the area include:

(ii) Bluff Point, where the headland is a trachyte plug, has a 2.3 km circuit walking track up to the summit of Bluff Point. It has two viewing platforms overlooking Keppel Bay.

Both these destinations provide useful interpretative signage about the geological and natural features. For more information check out http://www.nprsr.qld.gov.au/parks/capricorn-coast/ which includes a downloadable map.

* Prior to the arrival of Europeans the coast was occupied by Aboriginal people from the Darumbal language group.

* The first European to reach the area was Captain James Cook who sailed past in the HM Bark Endeavour between 25 May and 27 May 1770. He experienced some difficulty with the shallowness of the water. During this time he named Great Keppel Island and Keppel Bay (after Admiral August Keppel) and Cape Capricorn.

* By the 1860s the area was being visited regularly by fishermen from Rockhampton.

* In the 1860s the Jardine family established a cattle station at Zilzie, south of the town.

* In 1888 a railway line was opened between Rockhampton and Emu Park.

* The arrival of the railway saw the establishment of stockyards, a butcher and a draper.

* In the 1890s the local Botanic Gardens were gazetted.

* A Catholic primary school was opened in 1917.

* 1939 saw Emu Park and Yeppoon connected by a coast road.

* The local surf lifesaving club was opened in 1959.

* In 1970 the "Singing Ship" was "launched" to celebrate 200 years since Captain Cook sailed up the coast.

* In 1984 the local museum was opened in the old Court House.

* In 2003 64 ha of wetlands and forest were set aside as the Capricorn Coast National Park.

There is no visitor information in Emu Park. The closest is the Capricorn Coast Visitor Information Centre, Scenic Highway, Yeppoon, tel: 1800 675 785. 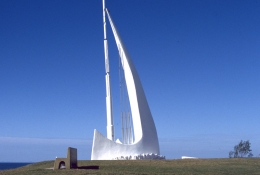 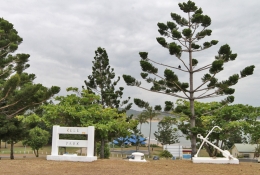 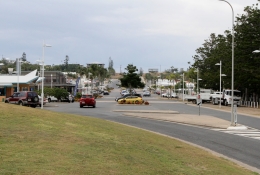 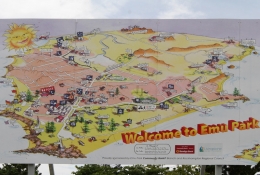 The map of the town in Bell Park near the boat ramp. 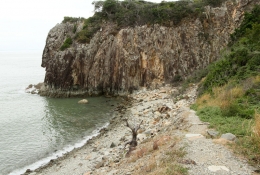