Interesting historic town in the Valley of the Lakes, north-west of Brisbane.

Esk is an interesting, predominantly timber and veranda-ed, historic town which nestles under Glen Rock and Mount Esk on the Brisbane Valley Highway and is notable for its historic timber shops, churches and houses. The town has a number of significant historic buildings in an area which boasts the remarkable and elegant Bellevue Homestead - a fine example of an affluent Queensland home from the late 19th century.

Esk is located 100 km north-west of Brisbane via the M2 and the Brisbane Valley Highway. It is 63 km north of Ipswich.

The town was named after the River Esk which runs from Dumfries and Galloway in Scotland to the Solway Firth in England.

Historic Buildings in Esk
Esk is an interesting town historically. It has a number of buildings which have been registered on the Register of the National Estate and many buildings in the main street - Ipswich Street - are fine examples of late 19th century vernacular Queensland architecture with fine joinery. They are handsome timber structures.

The Club Hotel
The Club Hotel  at 225 Ipswich Street, with its cast-iron balustrades and gracious verandas, is a fine example of a Queensland country hotel.

Nash Gallery & Cafe
Located at 212 Ipswich Street, the Nash Gallery and Cafe (known to the local as the Lars Andersen house) is a delightful timber residence which stands out against the other buildings on the street. The land was purchased by Lars Andersen in 1886 and by 1917 it was connected to the steam-driven saw mill behind the Club Hotel and thus was the first house in the town to have electricity. The town was eventually electrified in 1935. It has a superb corrugated iron hipped roof with a veranda that is a showpiece for the joinery skills of the time. It is officially on the Register of the National Estate. Check out http://www.nashgalleryesk.com.au for more details.

Esk Record building
Located at 160 Ipswich Street is the old Esk Record and Upper Brisbane Advertiser (it was published between 1931-1942) building. With its distinctive gabled roof (now closed in) and overhanging veranda it is listed as a fine example of small commercial premises in a Queensland country town.

Southern End of the Main Street
At the southern end of the main street (the Brisbane Valley Highway) are the unusually named St Mel's Roman Catholic Church (this Irish saint gave his name to Mel Gibson) and elegant old Queensland which is the Presbytery - they were built by local builders Lars Andersen; the beautiful old Staging Post Inn, which is now owned by Salts Antiques and Collectables (they have expanded from Crows Nest); the timber St Agnes' Church of England (1920) and the Anglican Rectory (1884); and the small timber Uniting Church.

Bellevue Homestead
One of the area's first settlers established the huge Wivenhoe run in the 1840s. It was here that the remarkable Bellevue Homestead was built in 1893 after the original pise residence had been destroyed by floods. Originally located on the banks of the Brisbane River it was moved some kilometres to Coominya in 1975 when the site was flooded by the Wivenhoe Dam. The building was occupied by George Taylor and his wife in the late nineteenth and early twentieth centuries. Important members of Queensland society, the Taylors hosted numerous parties at the home. Their guests included King Edward VIII (when he was the Prince of Wales) and General Birdwood. The large rooms, unusual pressed metal ceilings, and beautiful cedar panelling all combine to make Bellevue a particularly interesting example of Queensland vernacular architecture. It is in fact two houses connected by verandas. Located opposite the Coominya railway station, in Railway Street, it is now owned and run by John and Laura Dingle who open it from 10 am to 4.00 pm. For further details contact (07) 5586 4209. The homestead currently offers morning and afternoon tea, accommodation and dinners can be pre-booked. The cellar door for Riversands Vineyards is open daily. Check out http://www.brisbanevalleyheritage.org.au/Heritage-Building-Trail for greater details. The house has its own website - http://www.bellevuehomestead.com.au - which provides detailed information about tours, the history of the house, and detailed information about the buildings.

Lake Wivenhoe
Lake Wivenhoe lies to the east of Esk and is 80 km north-west of Brisbane. It was built after the devastating floods of 1974. Consequently it has a dual function as both flood mitigation and a safe, reliable source of water. By any measure it is a huge dam with a 2.3 km dam wall and five radial gates to control the water flow. There are four main access points - O'Shea's Crossing, Cormorant Bay, Logan Inlet and The Spillway Common - all of which are open seven days a week from 6.00 am - 6.00 pm and provide picnic and barbecue facilities. There are children's play areas at Logan's Inlet and Cormorant Bay. It is possible to swim at Logan's Inlet and fishing can be enjoyed from restricted motorised and non-motorised watercraft. Vessels can be launched from the lake's four boat ramps. There is a lookout at the spillway and an information centre just off the Brisbane Valley Highway. Camping is also available. There is an excellent downloadable "Recreation Guide" available at http://www.seqwater.com.au/sites/default/files/PDF%20Documents/Recreation/201311%20Lake%20Wivenhoe%20Recreation%20Guide.pdf.

* Prior to European settlement the area had been occupied by people from the Waka Waka Aboriginal language group.

* The first explorer into the region was Allan Cunningham who, on 5 July, 1829 collected botanical samples around the present site of Esk.

* The area was settled by European pastoralists in the 1840s after the New South Wales Government opened up the land around the penal colony at Moreton Bay.

* In 1872 small copper mines opened at Eskdale and Cressbrook Creek.

* In 1873 Sandy Creek, which later became known as Esk, was surveyed.

* The railway reached the town in 1886 when the line was extended from Ipswich.

* By the end of the 1880s the town had Anglican, Presbyterian (1875), Primitive Methodist and Catholic churches.

* It was here that the remarkable Bellevue Homestead was built in 1893 after the original pise residence had been destroyed by floods.

* By 1900 the cedar is the area was exhausted. In this year a butter factory was built.

* The Stanley Memorial Hospital was opened in 1926.

* The town was connected to electricity in 1935.

The University of Queensland site - http://www.queenslandplaces.com.au/esk - has useful information about the history of the town. 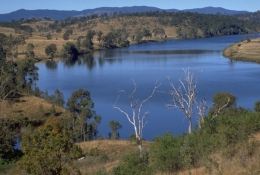 Lake Wivenhoe lies to the east of the town. 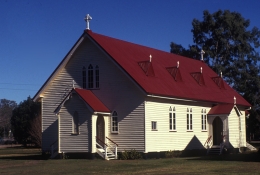 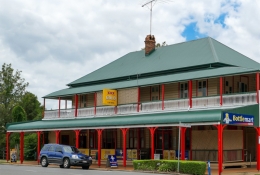 The Club Hotel in Ipswich Street - a typical Queensland pub. 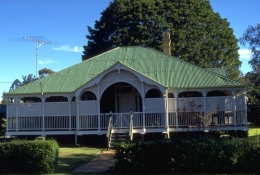 212 Ipswich Street. A fine example of a Queensland home of its era. It is now the Nash Gallery and Cafe. (pic taken 1990)