One time home of the world lizard racing championships

Eulo has a population of less than 50 people and consequently is little more than a pub and a general store. Historically it was a place where opal miners from the nearby mines at Yowah gathered. It was also known for the famous 'Paroo Track' where the world lizard racing championships were held each August. Like Yowah, Eulo has dramatic seasonal variations in its population. In winter some opal miners, grey nomads and beekeepers enjoy the dry local weather. Beekeepers even bring their bees from the south to feed on the flowers of the local native Yapundah tree. The honey, a distinctive Warrego variety, is dark and delicious.

No one is sure where the name Eulo came from. Some sources claim it was named after a European woman named Eulo. Other sources claim it is a local Aboriginal word which might mean (i) wet springs (ii) dry place (iii) the Buloo River.

'Kenny' - The Diprotodon Sculpture
At the eastern entrance to the town, on the main road, is a handsome bronze statue of a Diprotodon. It explains that "in 2011 the site of one of Australia's most highly concentrated accumulations of megafauna fossils was discovered near Eulo and included a large Diprotodon, nicknamed Kenny. Kenny's fossilised bones were used by palaeontologists and sculptors to help reconstruct this full-sized, fleshed out bronze statue. The sites preserve diverse and well preserved remains that are of national scientific importance, unlocking clues to Australia's prehistoric animals, how they lived and died." It goes on to explain that the Diprotodon lived between 2.588 million and 30,000 years ago, was the largest of the Australian megafauna, grew to weigh as much as 2.8 tonnes and was:
* the largest known marsupial to roam the earth
* Modern day relatives are the wombat and koala
* Herbivore that grazed and browsed on vegetation
* Distinctive feet with broad footpads, strong claws and pigeon-toed hind feet
* Young carried in a backward facing pouch large enough to carry a human child
* Diprotodon lived in areas of grassland, woodlands and open forests
* Large continuously growing lower jaw tusks were probably used both in feeding and combat.

Eulo Queen Hotel
The Eulo Queen Hotel in the main street was named after Isabel Gray, later McIntosh, who became known as the Opal Queen of Eulo. She had arrived in Australia in 1868, worked as a governess on a station near Bourke, and married a man James McIntosh who, at the time, was the overseer on the station. In 1871 she married Richard Robinson. The couple later ran the store near Cunnamulla where the Cobb & Co. coaches stopped. With the profits from this venture they bought the hotel at Eulo. It was here that the opal miners came to drink and it was through this connection that Isabel accumulated a collection of opals which were reputedly worth over £4000. Throughout the far west of Queensland she became known as the 'Eulo Queen'. The Australian Dictionary of Biography takes up the story: "On 1 September 1889 Robinson acquired the freehold and hotel and billiard licences of the Royal Mail Hotel, Eulo. The Robinsons also conducted a store and butcher's shop. About this time the legend of the 'Eulo Queen' began. Although short, Isabel probably possessed some personal beauty with the physical sumptuousness so esteemed by contemporary males, and a complaisant husband enabled her to operate as a successful courtesan. Her bedroom was a scene of great activity. A stock of liquor there helped her to entertain groups of gentlemen with conversation and gambling. More intimate entertainment was available. Opals were the key to her heart; she was captivated by these fiery gems. She used them as currency and for adornment, including a fantastic girdle of alternate large opals and nautilus shells. Some say she styled herself 'Queen of Eulo', but others consider admirers conferred the title. The 1893 financial crisis and the 1896 failure of the Queensland National Bank reduced her wealth." For more details check out http://adb.anu.edu.au/biography/gray-isabel-6464. Today the hotel is the heart of the town.

Mud Springs
Located 9 km out of Eulo on the road to Thargomindah is a sign which reads: "Mud Springs. Built up over centuries these springs and others like them were the original release valves for the Great Artesian Basin. The tops are soft and jelly like and are the release valves. Occasionally they explode with a loud report audible for miles."
If you walk about 100 metres from the car park you will see a large mound. Climb to the top and you can inspect the thick, glutinous clay. A sign at the site explains that "The Aboriginal peoples of inland Queensland have strong cultural associations with Great Artesian Basin spring wetlands dating back thousands of years. Artesian springs have been critical to the survival of Aboriginal peoples of the arid interior, providing a source of water, food and other material resources, as well as having ceremonial and spiritual values. Evidence of traditional occupation and use recorded within the Great Artesian Basin spring wetlands include painted and engraved (petroglyph) rock art, burials, pathways, scarred trees, stone artefacts and scatters, wells, grinding grooves, and food and fibre resource sites. Some Great Artesian Basin spring wetlands have particular significance as story places, landscape features and as sites for cultural activities."
There are a number of excellent signs positioned around the spring. Each deals with specific wildlife attracted to the area. Here are some abridged sections of the signs:
Water Holding Frogs - explains that these burrowing frogs "spend the majority of their lives underground sealed in a water-proof cocoon made up of layers of shed skin. Water is stored in pockets under the skin ... Water Holding Frogs lay large amounts of spawn in non-foamy clumps in still water. Usually 500 eggs are laid at one time."
Shield Shrimp - They are recognised by the prominent dorsal shield which covers the majority of the animal. The body is made up of a variable number of body ring segments with each segment bearing one or more pairs of leaf like legs. The tail is long and very mobile and is free of legs ... Shield Shrimp lay eggs in the silt at the bottom of water pools ... Shield Shrimp filter feed on microscopic animals in the mud at the bottom of a pool. They may also graze on small animals or graze on water plants."
Shingleback - The Shingleback is found through inland Australia, where it enjoys the dry humid conditions. Shingleback skin is very thick to protect it from the stony landscape that they wander over, and the many spiky plants that they hide in. The thick skin aids in water retention, an important adaptation when living in the desert.
Painted Honeyeater - The Painted Honeyeater is small and distinctive, with black head and back and white underparts with dark streaks on the flanks ... Painted Honeyeaters inhabit Boree, Brigalow and Box-Gum Woodlands and Box-Ironbark Forests. They feed on mistletoe fruits growing on woodland eucalypts and acacias and also occasionally on insects and nectars.

Artesian Mud Baths
Enterprising locals have capitalised on the fact that the mud, which may be 20,000 years old, contains silica, magnesium, potassium, calcium, iron and zinc and have opened an artesian mud bath at Palm Grove. Tel: (07) 4655 4890 or check the website at https://www.artesianmudbaths.com.au.

Yowah
Yowah, which is a winter time opal mining destination, is really nothing more than a series of rather hastily constructed buildings ranging from caravans to lean-tos. In spite of this it is the second-largest town in the Paroo Shire. Yowah has been an opal field for nearly a century. In the 1890s its population grew to 400-500 but today it has about 50 in summer and around 200 in winter. The variation is produced by opal fossickers, mostly Victorians, who seek the Queensland warmth in wintertime. The main attraction is the valuable opal deposits known as 'Yowah Nuts'. To the uninitiated they look like rocks but when split open they sometimes contain a centre of pure opal. The main attraction is the hardiness and commitment of those who seek opals in the area. One attraction is The Bluff which offers excellent views over the whole area. Also a trip to the golf course, with its open-air clubhouse, large 'dunny' and sandy greens and fairways, is interesting. Such has been the success of this isolated town that it now has electricity, tarred roads and a Rural Centre with a library and internet/computer room.

Eulo Lizard Races
Sadly the Eulo Lizard Races, one of the genuinely quirky outback events, lasted for 30 years but stopped in 2000. The races were held at the 'Paroo Track' each August. It was held at the eastern end of town and on the left-hand side of the track there was a piece of granite with a plaque which read: 'Cunnamulla-Eulo Festival of Opals. 'Destructo', champion racing cockroach accidentally killed at this track (24.8.1980) after winning the challange (sic) stakes against 'Wooden Head' champion racing lizard 1980. Unveiled 23.8.81'. Somehow the spelling mistake, the absurdity of a cockroach racing a lizard, the circumstances under which the cockroach was trodden underfoot made it one of the great outback events.

* Prior to the arrival of Europeans the area around Eulo was occupied by Aboriginal people from the Kunja language group.

* The first European into the area was Sir Thomas Mitchell in 1846.

* In 1847 Edmund Kennedy explored the lands around the Warrego River.

* When William Landsborough explored the area in 1862 he wrote so positively about the district that his writings attracted settlers.

* The railway reached Cunnamulla in 1898.

* By the 1960s the major industry in the district was sheep grazing.

* The Court of Petty Sessions closed down in 1964.

There is useful information at https://www.outbackqueensland.com.au/town/eulo. 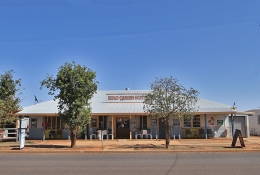 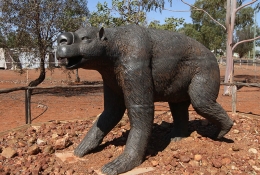 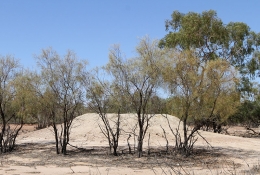 The mud springs outside Eulo 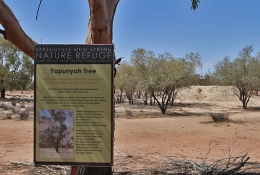 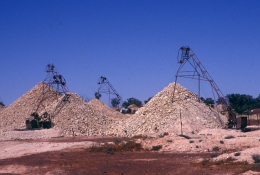 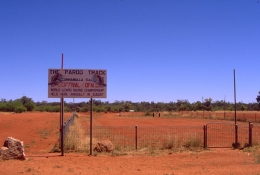 The famous Paroo Track as it was back before 2000 when the Lizard Races were abandoned. 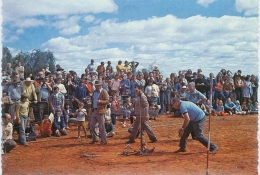 An historic photo of the town's famous Lizard Race