Historic port the banks of the Murray River.

Euston is a small service centre on the banks of the Murray River. Typical of the prevailing agriculture of the Riverina, it is completely surrounded by vineyards. Its primary appeal is its location on the Murray River. There is a boat ramp and several sandbars which means it is ideal for swimming, fishing and camping.

Euston is located 933 km west of Sydney via the Great, Mid Western and Sturt Highways and  483 km from Melbourne via Bendigo and Swan Hill.

Euston was named after a mansion in Suffolk, England.

Euston Courthouse
There was a time when Euston was an important river port and consequently, in 1883, this courthouse was built. Located at 41 Murray Terrace is now home to the Euston-Robinvale Historical Society. It contains photographs and memorabilia from the district. The museum is open from 1.00 pm - 5.00 pm on the first Sunday of the month. It can be opened on request. Tel: (03) 5026 3661.

Euston Lock and Weir 15
The locks on the Murray are always worth visiting. They are a reminder of the historic importance of the river. The lock was constructed between 1932-1936 and holds back water for 60 km. An estimated 32,000 megalitres of water flows through the weir and lock each day. There is a barbecue and picnic area on the Robinvale side of the river.

Lake Benanee
Located 13 km east along the Sturt Highway on the road to Balranald is the freshwater lake, Lake Benanee. It has a beach area, barbecues and toilets and is an attractive place to take a break from driving or to have a picnic. The lake covers 750 ha when it is full.

Bumbang Island Historical Reserve
Bumbang Island is recognised as a place of great Aboriginal importance. In 2001 a Cultural Heritage Management Plan identified 769 trees that had been scarred to make canoes and other utensils; 44 shell middens and a mia mia.

Lake Mungo
Euston is one possible starting point for a journey to Mungo National Park, recognised as an archaeological and geomorphological site of world importance. It is a relic of life in Australia 30,000 years ago when the area was defined by a series of large, deep, interlocking lakes "teeming with large fish. The now dry bed of Lake Mungo would have been 20 kilometres long and 10 kilometres wide, with a depth of some 15 metres. On its eastern side sand dunes provided sheltered campsites by the lake shore" is the way archaeologist Josephine Flood described the area in Archaeology of the Dreamtime.

Aboriginal hunters and gatherers, accustomed to walking from water hole to water hole, settled on the shores of the lakes and established semi-permanent campsites where they could rely on the freshwater lakes for fish and crustaceans. The local fauna, drinking at the water's edge, supplemented their food supply.

About 16,000 years ago, as the whole area became more arid, the lakes dried up. All that was left was a 25 km-long sand dune, called a lunette, which stretched along the eastern edge of the lake and was, in places, up to 40 metres high.

When shepherds, many of whom were Chinese, arrived in the area in the 1860s they called the lunette the Walls of China.

Today that landscape remains unchanged. Arrive at Lake Mungo and from the Mungo Lookout above the Visitor Centre, you can gaze across the flat, barren bed of a long-departed lake with some heavily weathered sand dunes rising on the eastern horizon.

Lake Mungo is one of the most important archaeological sites in Australia and it is worth visiting – but only if you are accompanied by a knowledgeable guide who can explain the region's uniqueness and significance.

Lake Mungo's claims are threefold. It has "one of the longest continual records of Aboriginal life in Australia" having been occupied for over 50,000 years. The skeletons found in the sands of the lunette are the "oldest known fully modern humans outside Africa" and, most importantly, the skeleton of Mungo Woman (or Mungo I as she is officially known), which has been radiocarbon dated to around 26,000 years ago, "has provided the oldest evidence of ritual cremation in the world."

Josephine Flood has written of the discovery: "It is interesting that it is a woman who was cremated. Although no conclusions can be drawn from a sample of one, it at least shows that 26,000 years ago women were considered worthy of complex burial rites. What emotions inspired those rites – love, fear, or religious awe – we will never know, but all show a concern for the deceased which is the essence of humanity."

The way to make sense of Lake Mungo is to gaze across the dry lake bed, walk up the dramatic and unusual lunette, and silently contemplate the idea that once, tens of thousands of years ago, at this lonely, haunted place, Aborigines painted themselves with ochre, ate fish and mussels from the lake, buried and cremated their dead, cooked meat in simple hearths and ovens, sewed skins into cloaks and shaped bones and stones into tools and weapons. There is a unique magic about the place, a strange spirituality which is particularly apparent at dawn and dusk.

If you want to glimpse what life was like for Aborigines when our European ancestors were still living in caves then Lake Mungo is a genuinely unforgettable experience.

* Prior to European settlement the area around Euston and Robinvale had been occupied by the Latje Latje Aborigines for at least 30,000 years.

* In 1830 Charles Sturt passed through the area on his expedition down the Murray River.

* By 1836 Major Thomas Mitchell had passed through the area on the expedition known as "Australia Felix".

* The township grew on the site of the Boomiarcool station, established by seventeen-year-old Edmund Morey in 1846 at what was then the western limit of European settlement.

* In 1847 John and Mary Grant took up a grant of 20 square miles (5,180 ha) on the Murray. They were able to provide the early paddle steamers with fresh vegetables. The area eventually became the town of Euston.

* In 1853 William Randell in the paddle steamer Mary Ann and Captain Francis Cadell in the Lady Augusta reached Euston having travelled from the mouth of the Murray River.

* By the 1860s the land was devoted to wool production and the town developed as a river port with a wharf, ferry, courthouse, police station, hotel, a boiling-down works, wool-scouring plant and Eucalyptus factory.

* By 1865 Euston had a police station, a courthouse and a whipping post outside the Courthouse.

* In 1924 the railway reached Robinvale.

* In 1928 a road traffic bridge across the Murray joining Robinvale in Victoria to Euston helped sustain the town.

* In 1948 the huge Southern Cross windmill was erected.

* In 2004 the NSW Road and Traffic Authority and VicRoad began construction of a new bridge across the Murray. It was finished in 2006.

There is a useful and detailed local website. Check out http://www.robinvaleeuston.com/ for information about both Euston and Robinvale. 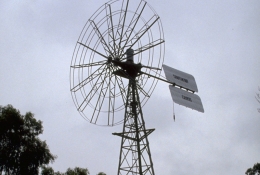 The Southern Cross windmill erected in 1948 and reputedly the biggest in the southern hemisphere. It is 9.1 metres in diameter. 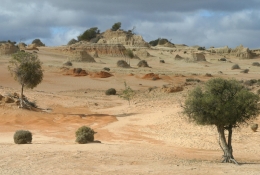 Part of the Walls of China at Lake Mungo 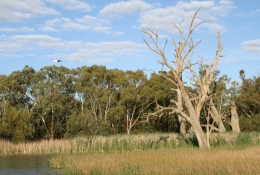 A pelican flies over the Murray River near Euston.