Evandale, a classified historic town, is situated on the South Esk River south of Launceston. It has a number of superbly preserved Georgian era buildings, is close to National Trust-run Clarendon House which is considered one of the finest Georgian mansions in the country, and is the setting for the wonderfully appropriate National Penny Farthing cycling championships. It is a place worth exploring by anyone interested in the early history of Tasmania.

Evandale was named after the surveyor and painter, George William Evans, who was Van Diemen's Land's first Surveyor-General. He was already famous as the man who had led the first expedition beyond the Blue Mountains in New South Wales.

Historic Buildings in Evandale
Around the time of Australia's Bicentennial celebrations (1988) there was a brochure published titled Let's Talk About Evandale. It listed 38 buildings and sites of historic in the town and over 70 in the district. There is useful information at http://www.heritageaustralia.com.au/search.php?state=tas&region=112&view=76.
The most important buildings listed include:

Blenheim
Located on the southern corner of Barclay and High Street, 'Blenheim', originally known as the Patriot King William IV Inn, was built in 1832.

St Andrews Anglican Church and Graveyard
Located at 6 High Street it is recorded in the Australian Heritage Database in the following terms: "St Andrews is essentially designed in the a Victorian Academic Gothic style in terms of detailing and proportions, however the use of cement rendered brickwork is slightly incongruous with this style. The church is English Gothic in derivation with a nave, chancel and sanctuary, and an imposing spire (a later addition) placed over the entrance porch. Lancet windows are placed between butressed walls with triple panelled plate tracery windows at the west and triple lancet windows at the chancel.The church contains one stained glass window, an octagonal font (claimed to have been originally located at St Davids), altar rails and timber carved pulpit. The adjacent cemetery is surrounded by ornamental cast iron railings. The cemetery contains the graves of people associated with the local community and the colonies. This includes the vault of James Cox, historically interesting to this district and NSW (Cox of Blue Mountains), the tomb of David Collins - first settler at Evandale and also Capt Barclay's smaller vault and tombs of local people. A plaque on the wall of the church records that Frank Long, the pioneer discoverer of silver at Zeehan, is buried in an unmarked grave in the churchyard."

The Saddlers Shop
Located on the corner of Russell and High Street is an early saddler's shop dating from 1840 when horses were still the main mode of traffic.

Evandale's First Water Tower
On the road from Launceston is the town's stone water tower, notable for its battlements, which was built in 1895.

Nile
Located 13 km south is the tiny village of Nile, on the Nile River. It is a pretty village with the most notable buildings being St Peter's Church (1893) with its impressive tower and the ruins of the former Nile Inn. On the Nile-Cleveland Road, to the south of the town, is 'Kingston', a single-storey rubble stone house which was built by John Batman, the founder of Melbourne.

In Alan McCulloch's Encyclopaedia of Australian Art the entry on Glover notes: 'He was a skilful and prolific painter of landscapes with a reputation extending to France, where he attracted the interest of Louis XVIII. The French king bought Glover's pictures, presented him with a gold medal, and was said to have aroused his interest in migrating to Australia. A man of considerable wealth, Glover embarked from Gravesend on 20 Sept. 1830, arriving Launceston, 18 Feb. 1831, Hobart, 1 Apr. 1831. In Mar. 1832 he set off by wagon for Mills Plains to occupy his holding - a government grant of 2,560 acres. He bought an additional 5,098 acres, built a large house, Patterdale, a church at the nearby village of Deddington and lived a happily family life as a country squire and successful painter ... in Tas. he discovered a new landscape, light, foliage and atmosphere and responded to the raw and primitive features of the new country perceptively enough to attain new individuality and distinction. The rusticity of his new work became its greatest strength. The rusticity of his new work became a great strength."

Glover's house, 'Patterdale' (which he named after a place in the English Lakes District) is located 4 km east of Deddington. It is an elegant two-storey Georgian residence built in 1832 with a first floor of rubble stone and a timber second floor.

Glover died in 1849 and is buried next to his wife Sarah in cemetery at Deddington. John Glover's work is celebrated with the annual Glover Prize which is awarded every March in Evandale. For more information check out http://www.johnglover.com.au/.

Clarendon House
About 10 km south Evandale is 'Clarendon' House which is set in 7 ha of land on the banks of the South Esk River. It was built by the wealthy grazier and merchant James Cox in 1836 at an estimated cost of between £20,000 and £40,000. Cox was the son of the William Cox who built the first road across the Blue Mountains in NSW.

'Clarendon' is recognised as one of the most impressive and best preserved Georgian houses in Australia. Its combination of beautifully proportioned rooms (with their high ceilings) and a diversity of interesting outbuildings - a dairy, a butcher's shop, a bakehouse, a large stable, a gardener's cottage - make it particularly interesting and gracious building. It offers a rare insight into the lives of the wealthy early settlers. A far cry from Sarah Island or Port Arthur. The building was gifted to the National Trust in 1962. It is open daily between 10.00 am - 4.00 pm and is closed in July and August. Check out http://www.nationaltrust.org.au/tas/clarendon for details. Tel: (03) 6398 6220.

Strathmore
Located at 868 Nile Road 'Strathmore' is a convict-built residence which was completed in 1826 and is now called Strathmore Colonial Accommodation. It is surrounded by extensive gardens with croquet and tennis facilities, a large orchard and it overlooks Lockmaben Lake. For more information check out http://www.northerntasmania.com.au/accommodation/strathmore-colonial-accommodation/.

* Governor Lachlan Macquarie travelled through the Evandale area in both 1811 and 1821. On his first visit he decided that a town should be built in the area and designated a site, about 3 km south east of the present town, as a suitable location.

* In 1826 one of the first prominent houses was 'Fallgrove' which was built for Kennedy Murray, another Norfolk Islander, in Rodgers Lane. Murray was the first Chief Constable of Evandale.

* In 1838 Clarendon House was completed for James Cox. He was the son of William Cox who had made the first road across the Blue Mountains in New South Wales.

* The town was named after George William Evans who was Van Diemen's Land's first Surveyor-General.

* Among the town's lesser known early inhabitants was a convict named John Kelly whose son, Ned, achieved infamy as a successful bushranger.

*The economic wealth of Evandale is historically based on wool, fat lamb raising, cattle and dairy produce and the growing of wheat, oats, barley and peas.

* Today Evandale is one of a number of "must see" well preserved Georgian villages between Hobart and Launceston. 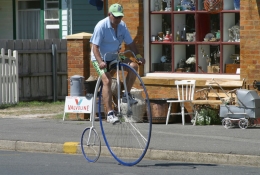 Evandale has achieved fame as a setting for an annual pennyfarthing bicycle race. 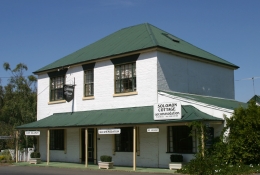 Solomon Cottage - built as a bakery in 1838 by Joseph Solomon. 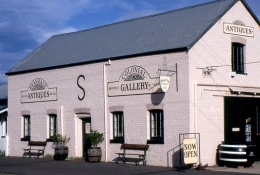 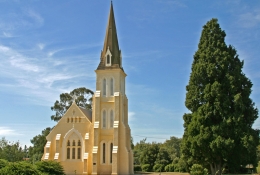 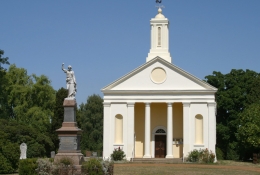 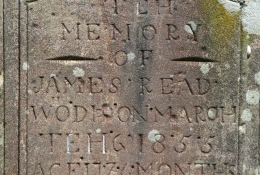 The spelling of the stonemason: "TEH MEMORY OF JAMES READ WO DID ON MARCH TEH 6 1855 with a H added to make WHO and an E hastily added to make DIED. 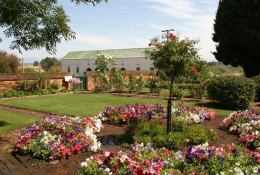 The glorious gardens around Clarendon House. 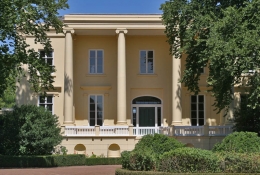 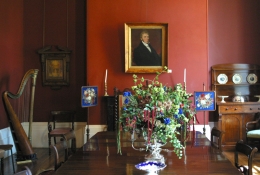 The elegant interior of Clarendon House - a National Trust building.