Quiet holiday destination on the Evans River south of Ballina.

Nestled between the Broadwater National Park to the north and the Bundjalung National Park to the south, Evans Head is a charming combination of a vibrant fishing village and a quiet family holiday destination. Commercially the town is home to a substantial fishing fleet and proudly claims that it was the first prawning port in Australia. Today the town's economy is driven by tourism, sugar cane, dairying and a substantial fishing fleet. The town has 6 km of safe surfing beaches, some fine coastal scenery, sandy river flats, and is a popular spot for rock, beach and ocean fishing. The population hovers around 3,000 permanent residents, many of whom are retirees, and expands to 12,000 during the summer school holidays.

Evans Head is located 6 metres above sea-level and 714 km north of Sydney at the mouth of the Evans River.

There are two explanations for the naming of Evans Head. The first argues that a European settler named Captain Thomas Paddon walked through the area when his coastal survey ship was unable to leave Ballina. He named the river and offshore reef "Evans" after the first lieutenant of his survey ship. This is repudiated by a more plausible explanation: "The story about Thomas Paddon naming Evans Head, although quite well known, is incorrect. It is very true though that he was the first European settler and a patriarch to the town. The name Evans River first appeared on Admiralty maps in 1832, some 9 years before Thomas was born, in England, and is marked on many other maps before Thomas’ migration to Australia. Evans Head was most likely named after a young Captain Evan Evans who twice hit the reef off Evans Head some time around 1829 or 1830 and stopped at the river for repairs. This explanation appears in a number of publications from the late 1800’s and early 1900’s. While Evan Evans never settled there some of his descendants live there now."

Razorback Lookout
Located on the southern headland, above the mouth to Evans River, is Razorback Lookout which offers panoramic views up and down the coast. On a clear day it is possible to see Cape Byron Lighthouse to the north; the sand dunes of Broadwater National Park; and cane fields and the smoke from the sugar mill at Broadwater. The lookout also has an interesting anchor dating from around 1900 which tells the story: "This anchor is typical of those used by many of the vessels plying between the North Coast of New South Wales and Sydney at the turn of the century. It became entangled in the net of an Evans Head prawn trawler working just south of the Richmond River entrance at Ballina. As they were unable to raise the net it was towed towards Evans Head but was lost off Broadwater. It was located by a diver and subsequently raised and brought to Evans Head in 1976. Eighty nine vessels are known to have been lost whilst trying to cross the dangerous bar at Ballina and this anchor represents an era when shipping was the only means of transport to and from the region." To get to the lookout, cross the bridge over the Evans River, follow the riverbank past the boat harbour and drive east on Ocean Drive.

Evans Head Living Museum
Located at 19 Woodburn Street, and open from 9.00 am - 1.00 pm, Monday, Wednesday and Friday (tel: 6682 6410) it has exhibits which "allow the visitor to explore our rich local history as a WWII RAAF Base; Aboriginal History and Culture; Natural Environment; Sport; Gold & Sand Mining." For more information check out http://www.evans-head.com.au/about.

Bundjalung National Park
The Bundjalung National Park stretches along the coast from Iluka to Evans Head. It covers 18,000 hectares, 38 km of beaches and ranges from rainforest through heathland, coastal cypress stands, lagoons and wetlands to coastal plains. The park is home to 205 bird, 30 mammal, 38 reptile and 13 amphibian species. For more detailed information check out http://www.nationalparks.nsw.gov.au/Bundjalung-National-Park. Its list of activities in the park includes canoeing on Evans River; walking the Gummi Garra walking track along the Evans River (it is a 1.75 km loop and usually takes around 2 hours - medium difficulty); canoeing and kayaking on Jerusalem Creek and walking along the banks and across the wetlands at Jerusalem Creek (it is an 8 km loop of medium difficulty and takes around 3 hours - there is a shorter Black Rocks walk from the Black Rocks campground). Located to the south of Evans Head (access to the park involves crossing the Evans River and turning west on Bundjalung Road frpm Evans Head or leaving the Pacific Highway south of Woodburn on Gap Road). The park has a number of interesting visitor facilities and attractions.

2. Black Rocks Camping Area
The Black Rocks Camping Area can be accessed via a 15 km gravel road (Gap Road) which heads east from the Pacific Highway south of Woodburn. It is possible to canoe or kayak on Jerusalem Creek which runs north from the camping area; there is a Jerusalem Creek Walking Track which is an 8 km loop of medium difficulty and takes around 3 hours; and the beach is accessible for 4WD vehicles at the southern end of the camping ground.

Broadwater National Park
Broadwater National Park lies between Broadwater on the Pacific Highway and Evans Head. It covers 4,210 ha, including 8 km of beach frontage, and is accessed by a sealed road which runs between the two towns. It contains remarkable large sand dunes dating back 60,000 years ago and ridges formed by the cementation of wind-blown sands on existing rocks. Covered largely by heath and wetland, the park bursts into colour at springtime as a result of the wildflowers. There are many bird species in the park including  jabiru, ibis, herons, and brolgas. As well there are swamp wallabies, red-necked wallabies, echidna, bandicoots, ring tail possums, blossom bats and bush rats. The Bundjalung people held initiation ceremonies until 1922 at a bora ring which was located in what is now part of the park. From Evans Head, the Broadwater Road heads north through the park. About 1.5 km out of town, to the east, is the start of the Salty Lagoon Walking Track which leads to an unusual wetland area in the scrub behind the sand dunes where bird life is profuse. About four more kilometres along the Broadwater Road, a road heads off to Broadwater Lookout which offers an excellent opportunity to inspect the huge sand dunes. As well there is a short walking track down to the wild Broadwater Beach. For more information and a detailed map check out http://www.environment.nsw.gov.au/nationalparks/parkHome.aspx?id=N0007 and http://www.nationalparks.nsw.gov.au/broadwater-national-park.

* Prior to the arrival of Europeans the area was inhabited by the Bundjalung people for tens of thousands of years.

* The first European settler was Captain Thomas Paddon who walked along the coast when his coastal survey ship was unable to leave Ballina. He named the river and offshore reef Evans after the first lieutenant of his ship.

* In the 1870s Paddon searched the local beaches for alluvial gold which was discovered but only is small amounts. Chinaman Beach was mined by around 300 Chinese miners.

* Captain Paddon settled at the mouth of the river and built a hotel from cedar logs washed up on the beach. He is buried in a lonely grave outside the town on the Iron Gates Road. Paddon's family were involved in oyster farming and his son, Jim, and his grandson, Evans, achieved fame when they won world titles in rowing. It is claimed that Evans pioneered the Australian prawning industry in the Evans River.

* By the early years of the 20th century the town was attracting a few regular holiday-makers mostly from Kyogle and Casino.

* A community hall, built in 1921, was used for church services and motion pictures.

* A restaurant and banking facilities were established in 1925.

* The RAAF established a bombing gunnery school in 1940 and, during World War II, the town was home to 1,776 airforce personnel. It was the largest air training facility in the country. Of the 5,500 people trained during the war nearly 1,000 were killed in action.

* Today it remains a quiet holiday and retirement town which is removed from the Pacific Highway. It now boasts one of the largest caravan parks in Australia.

There is a useful website with information about accommodation and eating. Check out http://www.evans-head.com.au. 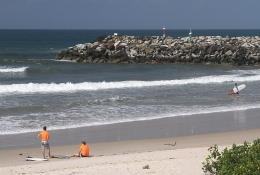 Surfing on the northern side of the Evans River breakwater. 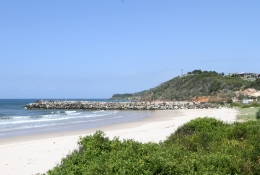 View of the breakwater and Evans Head from Broadwater National Park. 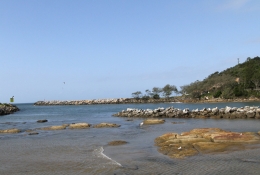 The mouth of the Evans River and Evans Head. 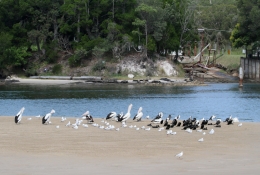 The mouth of the Evans River is a popular haunt for the local birdlife. 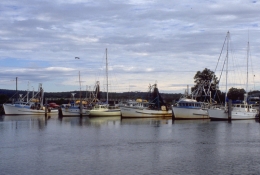 The Boat Harbour and the fishing fleet on the edge of the Evans River. 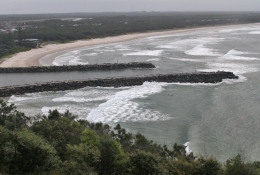 The breakwaters at the mouth of the Evans River from Razorback Lookout. 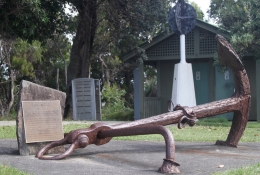 The Anchor (circa 1900) at Razorback Lookout. 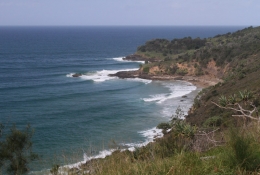 The view south from Razorback Lookout. 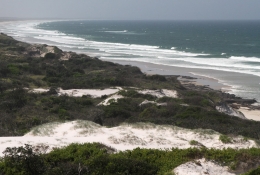