Many of the towns which run like a daisy chain up the ridge of the Blue Mountains have little to distinguish them. They are quiet, mountain villages. In the case of Faulconbridge it has three legitimate claims to the traveller's attention. The home of one of Australia's most loved and controversial artists, Norman Lindsay, is open to the public and offers an interesting art exhibition and impressive statues in the gardens. The grave of the Father of Australian Federation, Sir Henry Parkes, stands prominently in the local cemetery. And there is an ever-expanding Prime Minister's Corridor of Oaks with trees for every Australian Prime Minister.

Faulconbridge is 447 metres above sea level and 74 km from Sydney via the Great Western Highway.

Prime Ministers' Corridor of Oaks
A local MP, Joseph Jackson, was a great admirer of Sir Henry Parkes. He was Parkes and the father of modern Australia. In 1933 he gave the local council land in Jackson Park (On Sir Henry's Parade which runs between Springwood and Faulconbridge on the southern side of the railway line) which was specifically and explicitly to create a Prime Ministers' Corridor of Oaks. The plan was to get every Prime Minister, and in the case of deceased Prime Ministers to ask their closest living relative, to plant an oak tree. Kevin Rudd planted his oak in 2012. It is a pleasant piece of parkland and unusual celebration of Australian prime ministers.

Remembering Sir Henry Parkes
There is little point in visiting Faulconbridge House (it has been changed beyond recognition) but the grave of Sir Henry Parkes lies in a small cemetery just west of the Prime Minister's Corridor of Oaks on Sir Henry's Parade. It is the largest monument in the graveyard and includes a plaque which, with great simplicity, sums up his importance in Australian history. 'Sir Henry Parkes, Father of Australian Federation, five times Prime Minister of New South Wales, arrived in Australia July 25, 1839, worked as station-hand, Customs Officer, bone and ivory turner. In 1850 became proprietor of Empire Newspaper. Member of New South Wales Parliament from 1854-1894, Sir Henry Parkes is especially remembered for his efforts to develop New South Wales Education and Railways and his work for Federation earned him his title Father of Federation.' A suitable homage to a remarkable politician.

Aboriginal Blue Mountains Walkabout
This is a quality Aboriginal experience which lasts six hours (approximately 11.00am - 5.00pm), is led by Evan Yana Muru (a local member of the Dharug group) and offers a 3.5 km walking experience throught the bush around Faulconbridge which includes: "Experience our ancient and sacred art, ceremonial sites and artefacts. Hear our Dreamtime stories, enjoy our bush tucker,our bush medicines, participate in creative ochre bark and  body painting ... See wildlife and spectacular sandstone caves. Paddle in a clear water rock pool by a waterfall." For more details check out http://www.bluemountainswalkabout.com/.

* In May, 1813 while attempting to cross the Blue Mountains, the explorers Blaxland, Wentworth and Lawson camped nearby at what is now Springwood and noted several Aboriginal huts in the area.

* the railway came through the district in 1867 and Faulconbridge station was opened in 1877.

* 1877 was also the year that Sir Henry Parkes moved to the area and purchased 600 acres. There is a suggestion that the first railway platform at Faulconbridge was built to serve his residence, Faulconbridge House.

* In 1902 the current railway station was built.

* 1912 saw Norman Lindsay settle in Faulconbridge. He remained until his death in 1969. 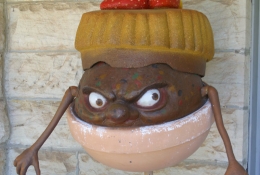 The Magic Pudding on the veranda outside Norman Lindsay's home. 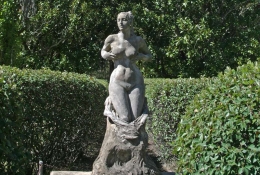 The gardens at Norman Lindsay's home are a wonderland of nude statues including 'Woman holding breasts' (1920s). 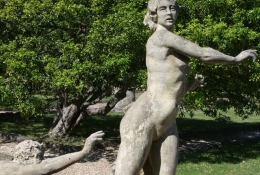 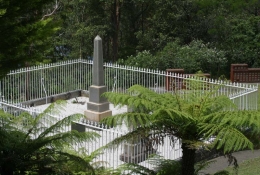 The grave of Sir Henry Parkes, Father of Australian Federation. 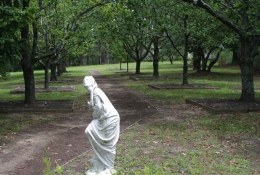 The Prime Minister's Corridor of Oaks