Idyllic surfing and fishing town south of the mouth of the Tweed River.

Fingal Head, sometimes known simply as Fingal, consists of a narrow spit of land that lies between the Tweed River estuary and the ocean, a rocky headland and an offshore island. The northern tip of Fingal Head forms the south head of the mouth of the Tweed River and a single road runs south down Letitia Spit. Today Fingal Head has become a relatively quiet holiday resort south of the bustle of the Gold Coast. It is noted for holiday activities - boating, rock fishing and surf fishing, golfing, swimming, tennis and surfing. It has even escaped from the development which has occurred to the south at Kingscliff and Salt.

Fingal Head lies one kilometre south of New South Wales border. It is  816 km from Sydney via the Pacific Highway and 110 km south east of Brisbane via the Pacific Motorway.

The Cudgingburra people called Fingal Head "buninybah" meaning "home of the echidna". The name was "Europeanised" because the headland has an outcrop of columnar-jointed basalt which was named the 'Giant's Causeway' because it looked like a similar natural feature near either Fingal in Northern Ireland or Fingal Cave on the Scottish Island of Staffa. Fingal was a mythological Celtic giant who tried to build a causeway over the ocean.

Fingal Headland
From the lighthouse on Fingal Headland it is possible to see, on the water's edge, outcrops of hexagonal columnar-jointed basalt named the 'Giant's Causeway'. It is named after a similar natural feature associated either with a locality called Fingal in Northern Ireland or Fingal Cave on the Scottish Island of Staffa. Fingal was a mythological Celtic giant who tried to build a causeway over the ocean. The local Cudgingburra Aboriginal people named the headland "Booningbah" which evocatively meant "giant echidna" which is exactly what the headland looks like.

Fingal Lighthouse
The first Fingal lighthouse was established in 1872 and the current lighthouse dates from 1878. It was automated in 1920 and electrified in 1980. Designed by James Barnet it stands at the southern end of Fingal Beach. Although the light is only 7 metres above the surrounding ground it is 24 metres above sea level and can be seen 17 nautical miles out to sea.

Cook Island
Located 600 metres offshore from Fingal Head (it can easily be seen from the headland) and covering 78 ha, Cook Island is a breeding habitat for wedge-tailed shearwaters and crested terns. It is also known for "temperate, subtropical and tropical species of fish, crustaceans and molluscs [which] are abundant in the complex rocky reefs of Cook Island Aquatic Reserve. Several threatened or protected species also occur in the Reserve, including the giant Queensland groper, black rock cod, gold spotted rock cod (formerly known as estuary cod) and the grey nurse shark." Fishing is strictly prohibited but the island is popular for scuba diving and snorkelling.

The island was first identified by Europeans when Captain James Cook passed by on 16 May, 1770. In 1823 the explorer and surveyor John Oxley took shelter during a storm in the lee of the island. Two men from his party investigated the island where they found turtles and an unidentified wreck. Oxley called it Turtle Island. In 1828 Captain Rous gave the island its present name. For more detailed information check out http://www.dpi.nsw.gov.au/fisheries/habitat/protecting-habitats/mpa/cook-island-aquatic-reserve.

* The traditional inhabitants of the area were the Cudgingburra people, part of the larger Bundjalung people, who lived around the Tweed estuary surviving on the plentiful supply of food and fresh water. Each year there was an annual migration to the Bunya Mountain behind the Sunshine Coast where bunya nuts were gorged and important corroborees were held.

* Captain James Cook sailed up the coast and sighted Fingal Head on 16 May, 1770. He was nearly shipwrecked on Cudgen Headland. He named Mount Warning and Point Danger.

* The explorer and surveyor, John Oxley, reached the Tweed River estuary in 1823 while scouting out a suitable location for a penal colony.

* In 1828 Captain Rous surveyed the Tweed River, travelling about 36 km upstream. His charts include Cook Island off the coast from Fingal Head.

* Between 1828-1829 a military post existed at Point Danger to intercept escapees heading south from the penal colony at Moreton Bay.

* Cedar cutters moved into the district from 1844. They floated logs down the Tweed river to the estuary.

* In 1844 the Commissioner for Crown Lands estimated there were 5,000 Aborigines living between Tweed Heads and Moreton Bay.

* The first European birth in the district occurred in 1851.

* The state border was finalised in 1859 and Queensland was established as a state.

* A pilot station at the mouth of the Tweed River was established in 1870.

* The area's first sugar mill was operating in 1874 near Tumbulgum.

*  The Colonial Sugar Refining Co. established itself in the district in the 1870s. It bought and subdivided the land into farms for cultivation of the cane.

* The lighthouse at Fingal Head was built of Sydney sandstone and began operating in 1878.

* The sugar industry expanded in the 1880s and 1890s but a drop in the price, relatively harsh winters and competition caused a decline in the industry.

* In the 1890s dairying became important.

* In 1902 a breakwater was built to stabilise the sand bar at the mouth of the river.

* By 1909 bananas were being grown in the district.

* In 1985 a local Coastcare group started revegetating the areas mined for sand. 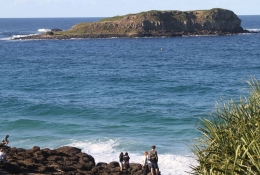 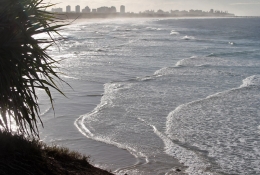 The view from Fingal Head towards Point Danger and Coolangatta. 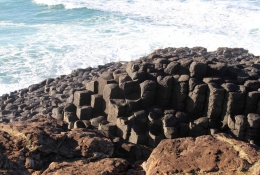 The columnar-jointed bedding of the lava flow at Fingal Head. 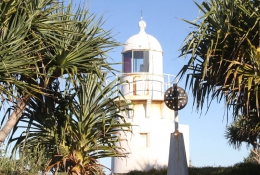